Beside Myself grabs you from the first page, and holds you in its vice-like grip, until the last. The story of identical twins Helen and Ellie is desperately sad and scary but thoroughly entertaining and at times darkly humorous.Helen and Ellie are twins living in the suburbs of London. Helen is the confident, domineering twin; younger twin Ellie is timid and a little slow. Helen treats Ellie with disdain and cruelty, until one day Helen invents a game and they swap places. Only problem is, at the end of the day, Ellie won’t swap back. No one, not her mother, friends, teachers, will believe Helen when she wants the game to end. In what should be an implausible outcome – but in Morgan’s capable hands is entirely believable – Ellie becomes Helen.At this time in their lives, Helen and Ellie’s mother barely gets out of bed, after their father’s ‘Unfortunate Decision’ – the family’s euphemism for his suicide years earlier. That is, until the arrival of scoutmaster Horace, their mother’s lover. While their mother views him as the saviour of the family, the former Helen hates him and only wants her identity back.  Her mother insists that everyone conform to their new ‘happy life’ so she won’t stand for the elder twin’s nonsense when she wants to return to her old self. From this point, Helen’s life starts to spin out of control with casual sex, drugs and mental illness.In alternate chapters we meet the grown-up former Helen – now known only as Smudge – a broken woman living on welfare. Her life has unraveled since the game but when her now successful and famous twin is hurt in a car accident all memories of the past are dredged up and Smudge finally faces what happened that day and all that has happened in between. Beside Myself is a compellingly dark novel that examines issues around inherited mental illness and sense of identity. It makes us wonder how much of ourselves is influenced by other people’s perception of us and how much is real. It’s thought-provoking in its depiction of how childhood trauma can affect our lives and Morgan’s depiction of Helen/Smudge’s bipolar episodes – her manic behaviour, voices in her head and her highs and lows – are vivid and fully of sympathy.Ann Morgan is a journalist and writer whose extensive work has appeared in the Guardian, theFinancial Times, and the Independent. Her first book, published to acclaim in 2015, was a year-long journey through a book from every country, Reading the World: Confessions of a Literary Explorer. She now blogs at ayearofreadingtheworld.com. When she’s not reading, writing or blogging, she can be found singing in professional choirs. 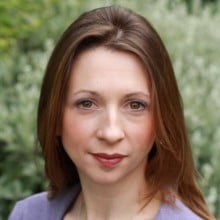 Ann Morgan is a freelance writer and editor. Her first book Reading the World: Confessions of a Literary Explorer, inspired by her year-long journey through a book from every country, was published in the UK by Harvill Secker on February 5, 2015. Her next book is a novel, a psychological literary drama called Beside Myself. It will be published worldwide in January 2016.When not writing, Ann can often be found performing with some of London’s top professional choirs. 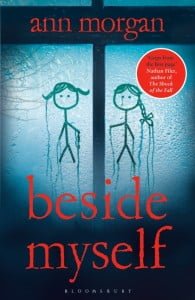