Abandoned in a big city at the onset of winter, a hungry four-year-old boy follows a stray dog to her lair. There in the rich smelly darkness, in the rub of hair, claws and teeth, he joins four puppies suckling at their mother’s teats. And so begins Romochka’s life as a dog.Weak and hairless, with his useless nose and blunt little teeth, Romochka is ashamed of what a poor dog he makes. But learning how to be something else…that’s a skill a human can master. Fortunately–because one day Romochka will have to learn how to be a boy.The story of the child raised by beasts is timeless. But in Dog Boy Eva Hornung has created such a vivid and original telling, so viscerally convincing, that it becomes not just new but definitive.Winner, Prime Minister’s Literary Award for Fiction, 2010.'Dog Boy is rich in interest and ideas…Hornung is wonderful on the physical characteristics, both beautiful and repulsive, of animals and children…Dog Boy unravels some of the reasons why humans and dogs are co-dependant and at the same time reinvents the idea of the wild child as an urban survivor, suggesting a future so menacing we prefer to ignore it.’ The Age
‘Astonishing…a world of terrifying tactility—of teeth, teat, fur and claw…The novel is a strange, sombre, sobering triumph.’ Peter Pierce, Sydney Morning Herald 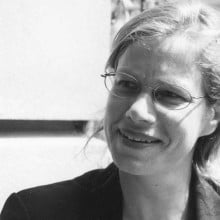 Eva Hornung was born in Bendigo and now lives in Adelaide. As Eva Sallis, she is an award-winning writer of literary fiction and criticism: her first novel Hiam won The Australian/Vogel Literary Award in 1997 and the Nita May Dobbie Award in 1999. Her novel The Marsh Birds won the Asher Literary Award 2005 and was shortlisted for numerous awards including the Age Book of the Year 2005, NSW Premier’s Literary Award and the Commonwealth Writers’ Prize.