Thirty years of celebrating the comic genius of Douglas Adams...On 12 October 1979, the most remarkable book ever to come out of the great publishing corporations of Ursa Minor (and Earth) was made available to humanity - The Hitchhiker's Guide to the Galaxy.It's an ordinary Thursday lunchtime for Arthur Dent until his house gets demolished. The Earth follows shortly afterwards to make way for a new hyperspace bypass and his best friend has just announced that he's an alien. At this moment, they're hurtling through space with nothing but their towels and an innocuous-looking book inscribed with the big, friendly words: DON'T PANIC.The weekend has only just begun...#8 in ABC My Favourite Book 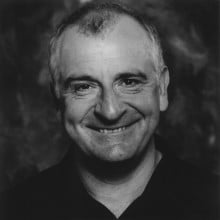 Douglas Adams created all the various and contradictory manifestations of The Hitchhiker's Guide to the Galaxy: radio, novels, TV, computer game, stage adaptations, comic book and bath towel. He lectured and broadcast around the world and was a patron of the Dian Fossey Gorilla Fund and Save the Rhino International. Douglas Adams was born in Cambridge, UK and lived with his wife and daughter in Islington, London, before moving to Santa Barbara, California, where he died suddenly in 2001. 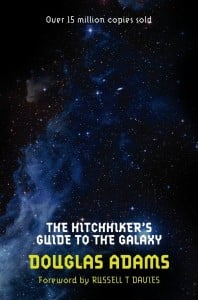