Hilarious and Heart-Warming Adventure: Review of The Taylor Turbochaser by David Baddiel Last time we heard from bestselling author and comedian David Baddiel it was for the release of Head Kid– we were lucky enough to have him come into the office and it was immediately apparent why kids find him and his books so entertaining.

In Baddiel’s new book, we are introduced to Amy Taylor who is in year 6 and loves cars.

Amy’s love for cars might seem unusual especially because she was in a really bad car accident when she was 8 years old (she’s now 11). As a result, she now needs to use a wheelchair – that also explains her number 4 pick as the van transports her and the wheelchair wherever she needs to go.

However, her wheelchair isn’t quite doing the job anymore – the wheels are wonky and it’s slow! Amy has a particular new kind of wheelchair in mind for her new ride a Mobilcon XR-207. So she’s thrilled when her dad, who now lives in Scotland and is actually a race car designer, steps in and gets her the new motorised wheelchair. She immediately tests how it corners, how it steers and what the top speed is but it isn’t long before she’s reminded that the wheelchair is a long way from being a racing car.

That’s where her best friend and inventor Rahul steps in. Inventor of the Whiter-Tooth-Whiz 503, Alarm Clock-to-Dreams Device 4446 and Toast-Butterer 678X amongst other things, Rahul is more than happy to assist Amy with some wheelchair modifications that will transform it into a race car – or as close as Rahul can get it!

Christened The Taylor Turbochaser, Rahul uses Amy’s wheelchair and the addition of lots of useful things from the scrap yard to create a car that she can actually drive. But dad is not happy and wants the wheelchair converted back to its original and rather expensive state.

Aside from the fact that Amy has only been driving for a matter of minutes and the car itself is not exactly legal, the only logical thing they can do is drive the contraption to Scotland and convince her father that it really is the greatest invention that ever there was. A risky plan is hatched, and they are on their way.

As you can imagine things don’t exactly go to plan and the police are soon in hot pursuit. Hilarious yet heart-warming this new adventure is full of thrills and spills. Perfect for reluctant readers and 8+ readers who need adventure, colour and laughs on every page. David Badiell has done it again so grab a copy and get in early – your little reader will think you’re cool and that always goes a long way…

Purchase a copy of The Taylor Turbochaser by David Baddiel

David Baddiel is a comedian, the host of numerous TV and radio shows, and the writer of four critically acclaimed novels. The Parent Agency is his first children’s book. David lives in London with his family. He hopes his own children won’t be applying to the Parent Agency anytime soon. 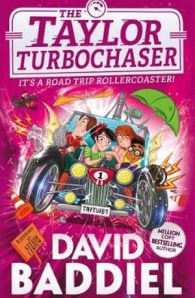 It's the latest Brilliant Blockbuster from bestselling Baddiel! A non-stop thrill-ride adventure that will have readers young and old racing to the finishing line.The Taylor Turbochaser is a road-trip rollercoaster… with a twist.At its heart is the unforgettable Amy Taylor. Amy loves cars, and dreams of being a driver. But there's a major catch: her slow old wheelchair with its broken wheel. When Amy finally gets a new electric one, it's exciting… at first.But standard engines only have so much power. And that's where Rahul comes in – Amy's best friend and genius inventor. Soon Rahul turns a wheelchair into… a supercar!And so the Taylor Turbochaser is born. But when it all goes suddenly wrong Amy is going to have to hit the road – and drive…

David Baddiel is an author and comedian. He has written and performed in a series of highly successful TV comedy shows, including The Mary Whitehouse Experience and Baddiel and Skinner Unplanned. His debut children’s novel, The Parent Agency, was the bestselling 9-12 debut of 2014 and was hailed by the Guardian as ‘funny, sometimes moving and always engaging.’ David is a brilliant and original new voice in children’s fiction. He lives in London. 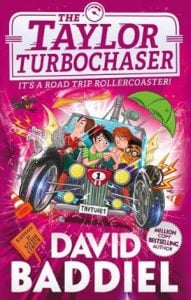