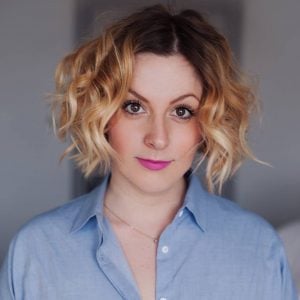 Laura Jane Williams is a columnist for Red magazine and the author of two non-fiction books, including Becoming which was based on her experiences of romance and love.

Our Stop is fabulous romance about near-misses, true love, and the power of the written word. Can you tell us a bit more about the book?

I can! It’s about the bravery of having hope in romance and a belief that you are worthy of it, in spite of evidence to the contrary. I think most of us have suffered heartbreak, and getting back up and deciding to take a punt on another shot at it is remarkably courageous to me. In Our Stop Nadia Fielding and Daniel Weissman meet through their commuter newspaper, and just need to get their act together long enough to also meet in real life… which is actually harder than it seems when they keep getting in their own way.

Basically, as a woman who has dated in London extensively – I dated like it was my job for a while, and literally made it my job. I became a national dating columnist! – I’ve long been obsessed with the idea that the man of my life (or my next date) would probably be somebody with the same cultural and social touchpoints for me. So, for example, we probably go to the same brunch spots at the weekend because we both follow the same London foodie insta accounts, or we both visit the same exhibit that’s the talk of the town, or even work in similar fields in the same areas. If you combine that with a vested interest in the “Rush Hour Crush” column of the commuter newspaper, I wondered: what if two people wrote to each other there, whilst also already breathing the same air in their favourite bars, restaurants and events? How long would it take them to figure out they were meant to be? It stands to reason that we’ve probably crossed paths with our next love repeatedly without realising it. And how frustrating is that when you feel all alone and unloved?!

Oh god – everything does. There’s an issue with a missing vacuum cleaning in Our Stop that is more or less exactly a story I stole off my Auntie Shirley. I reference You’ve Got Mail in the book, because I am a millennial woman: Nora Ephron is part of my cultural inheritance. I read voraciously, and love how David Nichols writes dialogue and Zadie Smith nails 3-D characters who feel unique and fully-formed. I think as a writer its important to stay porous, so that life and culture and relationships can influence your life, and then you can write about them.

I’m working on my next book! It’s called The Love Square and is about… a love square. It’s been a total joy to do, and as such sitting down at 9am and working through til 6pm hasn’t felt heavy or hard, liking writing sometimes can do. I work at home, alternating between an office in the corner of my kitchen and my dining room table, which is murderous for my back but very atmospheric in the afternoons. I actually just got a writing shed for my back garden, and am in the process of painting it and figuring out what furniture to put in there. I’m a very structured writer for my first drafts: I like a chapter-by-chapter breakdown of what will happen so I know exactly what I have to work on that day. The further on I get in the book the more playful I can get, adding in sprinkles of magic here and there that I hadn’t planned for.

What do you love reading in your downtime?

All sorts of stuff! I post my favourite reads on Instagram under #laurajanesbookclub, because it is my honour to shout about writers and books I love (And if I don’t love it, I don’t post about it. I will never understand people who yell loudly about stuff they don’t like.) My last reads have been Sarah Morgan’s A Wedding in December, Dawn O’Porter’s So Lucky, and I have a proof of the next Beth O’Leary waiting for me next. Earlier this year I loved Queenie and Praise Song for the Butterflies by Bernice L McFadden, too. If it has pages, I’m interested! A Touching and Heart-Warming Love Story: Read an Extract from Our Stop by Laura Jane Williams Our Stop by Laura Jane Williams: Your Preview Verdict Fun, Fresh and Wonderfully Romantic: Read a Review of Our Stop by Laura Jane Williams 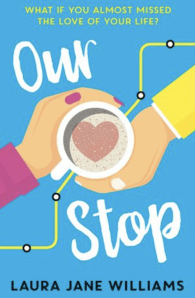 A wonderfully funny will-they-won’t-they romance, perfect for those who loved Sally Thorne’s 99% Mine and Helena Hunting’s Meet Cute.What if you almost missed the love of your life?Nadia gets the 7:30am train every morning without fail. Well, except if she oversleeps or wakes up at her friend Emma’s after too much wine.Daniel really does get the 7:30am train every morning, which is easy because he hasn’t been able to sleep properly since his dad died.One morning, Nadia’s eye catches sight of a post in the daily paper:To the cute girl with the coffee stains on her dress. I’m the guy who’s always standing near the doors… Drink sometime?So begins a not-quite-romance of near-misses, true love, and the power of the written word.

Laura Jane Williams is a columnist for Red magazine and the author of two non-fiction books, including Becoming which was based on her experiences of romance and love. 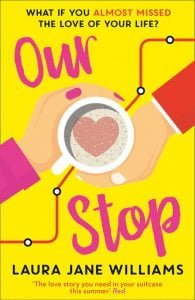 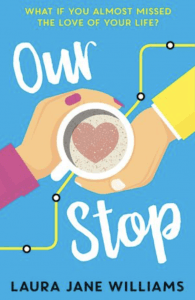