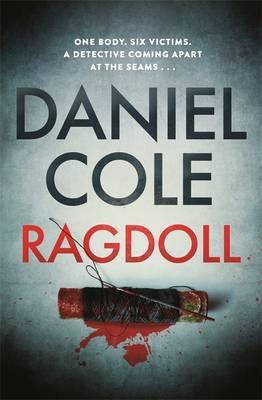 What do you do if you’re on the killer’s hitlist?

Debut author Daniel Cole arrives at the crime fiction scene with his exhilarating murder mystery, Ragdoll, demonstrating a screenwriter’s flair for drama and a novelist’s masterful control of character. It is gripping from the onset, setting the story on the trail of a mystery that is equally puzzling and disturbing. Clever, original, and at turns alarming, Ragdoll is an enchanting, immersive read. Although the book is explosive from the get-go, with enough murder to set the heart racing, the story really delivers by the end, where all the loose ends thread together and what once seemed mysterious becomes obvious and inevitable – the stamp of truly great crime writing.

In the middle of the night, Detective William Fawkes, known by reputation as Wolf, is called to a once-in-a-lifetime crime scene that is conspicuously close to his home. There he finds something horrific­ – one body, six victims. It hangs from the roof of some derelict apartment and is composed by the amputated body parts of six people stitched together. He recognises the ragdoll’s head – Naguib Khalid, a culprit accused of arson and murder from an old controversial case that nearly cost Detective Wolf his job – but who are the others? And why has the ragdoll murderer, whoever he is, sent a hit list to the very people capable of stopping him? Is it just the sick games of insanity? Or is something far more sinister at play?

It doesn’t take long for the media, led by Andrea, a journalist and (unfortunately) Detective Wolf’s ex-wife, to leak the story of the ragdoll murderer’s horrific premonitions, hurling the cast of characters into a tense whirlwind of sensationalism and pressure. From there, Detective Wolf undertakes a race against time in an attempt to prevent the murders foretold, and as the body count rises so does the murderer’s cunning.

With Wolf every step of the way is Detective Baxter, his old partner, who has her own vendetta against the forces trying to stop them. But with the world watching, can Detective Wolf and Detective Baxter save all six people while trying to piece together the clues of who’s already been murdered? And more importantly, can they figure out why? Who is this elusive murderer? So begins Detective Wolf’s most puzzling and personally dangerous investigation, and the longer he spends thinking about the past, the more he realises that it might be the key to stopping the ragdoll murderer in the future . . .

Debut writers often produce some of their finest, most personal, and spirited work. Ragdoll is no exception. There’s no doubt that Cole’s passion for cutthroat storytelling has produced an exhilarating page-turner. The forces against Detective Wolf quickly turn a public moralising into a personal haunting, and as he spins closer to cracking the case the pages basically turn themselves. So long as you’ve got the stomach for disturbing murder scenes, twisted villains, and the unexpected, this is the book for you. It evokes the kind of psychological eeriness found in Thomas Harris’ The Silence of the Lambs while paying tribute to the pace of a great thriller.

At 33 years old, Daniel Cole has worked as a paramedic, and RSPCA officer and most recently for the RNLI, driven by an intrinsic need to save people or perhaps just a guilty conscience about the number of characters he kills off in his writing. He currently lives in Bournemouth and usually can be found down at the beach when he ought to be writing book two instead. 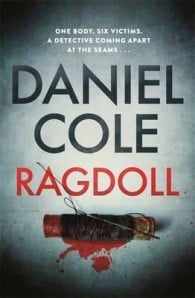 The beginning of an exciting new series starring detectives Wolf and Baxter.Believe the hype. Sold in over 32 countries and counting, Ragdoll is the standout thriller of the year.A body is discovered with the dismembered parts of six victims stitched together like a puppet, nicknamed by the press as the 'ragdoll'.Assigned to the shocking case are Detective William 'Wolf' Fawkes, recently reinstated to the London Met, and his former partner Detective Emily Baxter.The 'Ragdoll Killer' taunts the police by releasing a list of names to the media, and the dates on which he intends to murder them.With six people to save, can Fawkes and Baxter catch a killer when the world is watching their every move?https://www.youtube.com/watch?v=0l2sYevxNrc&spfreload=10

At 33 years old, Daniel Cole has worked as a paramedic, an RSPCA officer and most recently for the RNLI, driven by an intrinsic need to save people or perhaps just a guilty conscience about the number of characters he kills off in his writing. 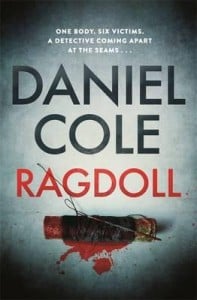