A quiet Australian town is rattled when local teenager Daisy Wolfe hangs herself from the clothesline in her parent’s backyard. Nobody seems to know why. But it doesn’t take long for the winds of change to sweep through, and soon the Wolfe family leave Wimmera – and Ronnie, a stranger, moves into their old house.

In the summer of 1989, Ben and Fab are best friends who spend their days yabbying, saving pocket money for Nikes, and learning along the way that some things are better left unsaid – such as the fact that Fab’s dad hits him.

But the young adolescent Ben has enough to worry about already: Daisy’s unexplained suicide, the growing pains of puberty, and the beginnings of his sexual awakening. Something about his new neighbour Ronnie sparks his curiosity. He and Fab argue over whether Ronnie is a secret agent. As Ben investigates, curiosity turns into suspicion. All of a sudden Ronnie takes an acute interest in Ben. He shows up on his front door when Ben’s parents aren’t home. He offers Ben a job, mowing the lawn once a fortnight, and nothing could prepare him for what happens next.

How does Ronnie know so much about Ben? And what he does, where he goes, his hidden confused desires? Why does Ronnie keep on bringing up the late Daisy Wolfe?

Against his will Ben spends increasing amounts of time at Ronnie’s house, and as their tense relationship grows heavier with complexity, so too does its impact, twenty years later.

As adults, a dark brooding secret hangs between Fab and Ben, something they don’t want anybody to find out – and yet, the truth is slowly unearthed.

The rural, gritty Australiana of Wimmera evokes the treasured storytelling of Tim Winton, but the adolescent angst, confusion, and sense of menace at its heart pay homage to books such as The Outsiders by S. E. Hinton and To Kill a Mockingbird by Harper Lee. Touching on small-town solitude, Brandi reminds us how many quiet tragedies happen in ordinary lives, and how their resonance continues many years after. It’s a story of trauma, convalescence, and revenge.

As a debut novel Wimmera makes a powerful statement, stamping not only Brandi’s compelling narrative voice, but his willingness to tackle and explore the vast solitude of the Australian landscape. Similar to Kenneth Cook’s understanding of how larrikin ideas of mateship have the power to destroy and repress, Brandi has extrasensory perception: he discovers beauty and meaning in places where – to the untrained eye – there appears to be none. Brandi’s previous career in the legal world underscores this profoundly eerie (because it reminds us of so many similar cases of predatory behaviour read in newspapers, not fiction) story of hidden darkness in a small country town.

Mark Brandi graduated with a Criminal Justice degree and his career includes roles as a policy advisor and project officer in the Victorian Department of Justice, before he changed direction and decided to devote himself to writing. His work has featured in print and radio, and he has won many awards for his fiction. In 2016 his debut novel Wimmera was awarded the CWA (British Crime Writers’ Association) Debut Dagger Award for an unpublished manuscript. He lives in Melbourne and is currently working on his next book. 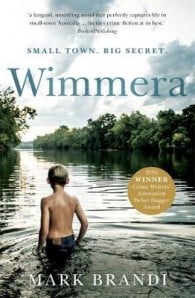 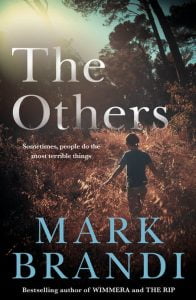