The Extraordinary Story of Doujon’s Heart 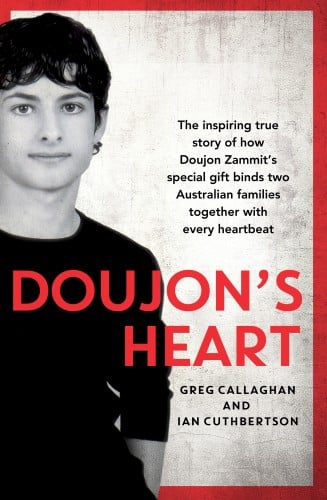 Doujon’s Heart is the extraordinary story of how the gift of a heart gave meaning to a senseless tragedy and inspired a lifelong friendship between two families.

Three years ago, Better Reading’s director Cheryl Akle received a call from a woman who told her, “Hello, my name is Rosemarie Zammit, my son was murdered in Mykanos four years ago.” So began the road to publication of this amazing story about Rosemarie and Oliver Zammit’s son, Doujon, and how his heart gave life to another young man, with whom the Zammit family now maintain an exceptionally strong bond of friendship and love.

Many readers will remember the story of 20-year-old Australian Doujon Zammit who died shortly after being bashed by bouncers on the Greek island Mykanos in 2008. Doujon received such severe head injuries that he would never recover.

The day Doujon received his fatal injuries was the day 31-year-old Greek-Australian journalist Kosta Gribilas was told he had only weeks to live after becoming critically ill with virus-induced heart failure. Without an urgent heart transplant, Kosta would die.

Watching Doujon’s terrible story on TV from his hospital bed in Athens, Kosta listened as the grieving father Oliver Zammit announced that he and wife Rosemarie would honour their dead son’s wish and donate his organs in Greece.  After tests to establish compatibility, Kosta received the news he would be the one to receive Doujon’s heart – if the high risk operation was successful.

Kosta later met the parents of the man who gave him a second chance at life, when Rosemarie and Oliver visited Athens and an extraordinary friendship began that sustained both families through more dark days to come.

Rosemary felt compelled to tell the story of Doujon and approached Better Reading’s Cheryl Akle with her diaries, hoping that Cheryl could help bring Doujon’s story to life. Once Cheryl heard Rosemarie’s story, and met with Kosta and his wife Poppy, she knew this was a compelling story that had the makings of a great book.

Cheryl arranged for Jane Palfreyman, of the Australian publishing house Allen & Unwin, to meet Kosta and the rest of the family. Palfreyman quickly agreed that this was a story that should be told.

Doujon’s Heart is that story – beautiful and inspiring and told honestly and straightforwardly by seasoned journalists, Greg Callaghan and Ian Cuthbertson, who have honoured Rosemary’s diaries with a compelling and highly readable narrative.

The writers convey the complex emotions involved in such a story – the mixture of guilt and happiness that Kosta faces in knowing that someone had to die in order for him to live and the turmoil of Rosemarie’s raw anger and grief, and her ultimate joy at what her son’s death comes to mean to others.

Doujon and Kosta’s story affected not just their own families, but by making headline news in Greece and Australia, it brought to light the importance of organ donation and the issues faced by donors and recipients. It’s a heartrending but beautiful story about two families united by tragedy. 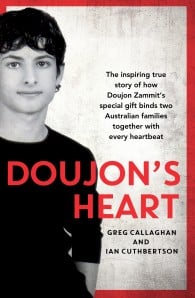 When 20-year-old Australian Doujon Zammit was bashed by bouncers on a Greek island in July 2008, his tragic story made headlines in both Australia and Greece. Doujon had sustained terrible head injuries and would not recover. His grief-stricken parents, Oliver and Rosemarie, honoured Doujon's previous wish to be an organ donor, and Oliver became famous overnight in Australia and in Greece when he announced that Doujon's organs would be donated to Greek recipients.The day Doujon received his fatal injuries was also the day 31-year-old Greek-Australian journalist Kosta Gribilas was given a death sentence in a hospital in Athens. Critically ill with virus-induced heart failure, he was told he had only two weeks to live. Without an urgent transplant, Kosta knew he would soon die. He'd followed Doujon's story on TV, and even as he watched Oliver's emotional announcement, Kosta hadn't thought he might be saved - the doctors didn't want to give him false hope. On 2 August, after an emotional farewell to partner Poppy and his family and friends, Kosta drifted asleep for what he thought was going to be the last time. A day later he woke up with Doujon's heart beating in his chest and the life he'd longed for now ahead of him.Because of the public nature of Doujon's fatal attack, Kosta met Rosemarie and Oliver when they visited Athens. It was to be the beginning of an extraordinary, heartwarming friendship that would sustain both families through the dark days to come - a roller-coaster course of events neither family could have possibly predicted. Through all this, Kosta is constantly reminded of Doujon's remarkable gift: 'How can I ever forget Doujon, when every heartbeat reminds me how blessed I am?'A beautiful, inspiring story about two families united by tragedy and how a selfless and courageous gift of love keeps on giving to this day.