Once There Were Wolves is the story of Inti Flynn, a biologist charged with reintroducing wolves to the Scottish Highlands in order to rewild the landscape, but both she and her twin sister Aggie, damaged by a secret the sisters have fled, may both be in need of rewilding themselves. When a body turns up, Inti knows that the fearful locals will blame her wolves, and she makes a reckless decision to protect them. But things grow more complicated when she begins to suspect the man she’s falling for may be responsible for the kill. OTWW is a love story, a murder mystery, a story of sisters and ultimately of the healing power of nature.

I came across an article about the largest and oldest living organism on the planet, The Trembling Giant, which is a forest of quaking aspen trees in Utah, all connected by one astonishing roots system. Some scientists believe it may be a million years old, but it’s dying due to human impact. An elegant solution to saving this forest would be to return wolves, previously hunted to extinction in the area, to the forest because they have such a powerful impact on their environment, but this would never happen because the local farmers and hunters wouldn’t allow it. I knew instantly that I wanted to write the story of a woman who was using wolves to save a dying forest, despite everyone in the area wanting her gone, and I wanted to write the story of the wolves themselves, so persecuted throughout history despite being essential to their environments. Humans are the true monsters in this story.

I spent a huge amount of time sinking into the world of biologists in a forest, working with the wolves they loved, making difficult decisions and confronting the complex emotions they had while dealing with wild and unpredictable animals. I’m so grateful to all the conservationists and scientists who wrote their accounts of what life was like on these projects, specifically the Yellowstone Wolf Reintroduction Project. There are dozens and dozens of first person accounts from which I learned so much about the process of working with animals, but also about the wolves themselves: they have such astonishingly distinct personalities. Their stories of adventure and survival were so moving, I knew I had to create wolves with just as much courage, with as much individuality, that they would be impossible not to love.

What are you hoping the reader will take away from the book?

This is, ultimately, a book about empathy, about its power and its lack. It explores both the cruelty we are capable of showing not just each other but also the natural world, and it explores the opposite of that, the tenderness and compassion and generosity we are capable of practicing. I hope that readers take away the importance of cultivating empathy in ourselves, for each other and for the invisible wild creatures and spaces we don’t see, the ones that are so easy to block from our minds. This is how we will move forward, the only way to tackle the enormity of climate change, the only true way to rewild ourselves.

One piece of advice for aspiring writers?

Writing and finishing a book is hard. It takes a long time and it takes you to dark places. So my biggest piece of advice is to write about something you are passionate about, because passion, caring about what you’re writing, will carry you through and show you the way when you get lost. It’s also important to find the joy! Take pleasure in what you’re doing, otherwise what’s the point? Propulsive and Spellbinding: Read an Extract from Once There Were Wolves by Charlotte McConaghy A Rare, Unforgettable Story: Read our Review of Once There Were Wolves by Charlotte McConaghy From the author of the international bestseller Migrations comes a pulse-pounding new novel set in the wild Scottish HighlandsInti Flynn arrives in Scotland with her twin sister, Aggie, to lead a team tasked with reintroducing fourteen grey wolves into the remote Highlands. She hopes to heal not only the dying landscape, but a broken Aggie, too. However, Inti is not the woman she once was, and may be in need of rewilding herself.Despite fierce opposition from the locals, Inti’s wolves surprise everyone by thriving, and she begins to let her guard down, even opening up to the possibility of love. But when a local farmer is found dead, Inti knows where the town will lay blame. Unable to accept her wolves could be responsible, she makes a reckless decision to protect them, testing every instinct she has.But if her wolves didn’t make the kill, then who did? And what will she do when the man she’s been seeing becomes the main suspect?Propulsive and spellbinding, Once There Were Wolves is the unforgettable tale of a woman desperate to save the creatures she loves. Part thriller, part redemptive love story, Charlotte McConaghy’s profoundly affecting novel will stay with you forever. 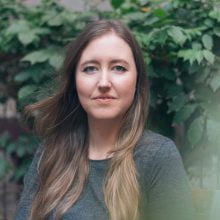 Charlotte McConaghy has been writing from a young age. She has both a Graduate Degree in Screenwriting and a Masters Degree in Screen Arts, and has worked in script development for film and television for several years. She has written a number of speculative fiction books but The Last Migration is her first literary novel. She lives in Sydney. Once There Were Wolves