Adam Blade is in his late twenties, and was born in Kent, England. As a boy, Adam would spend days imagining who could have first owned the sword and shield. Eventually, he created a character - Tom, the bravest boy warrior of them all. The idea for Beast Quest was born. When he's not writing Beast Quest books, Adam enjoys visiting museums and ancient battle sites. He also spends a lot of time at home running around after his two exotic pets - a tarantula named Ziggy, and a capuchin monkey named Omar. These little rascals were the inspiration for two of the Beasts that Tom faces on his Quest - Arachnid and Claw. Sadly, Adam does not have his own Fire-Dragon or Horse-Man. But he really wishes he did! 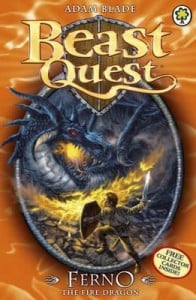