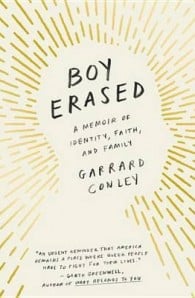 "The power of Conley’s story resides not only in the vividly depicted grotesqueries of the therapy system, but in his lyrical writing about sexuality and love.” —Los Angeles Times“This brave and bracing memoir is an urgent reminder that America remains a place where queer people have to fight for their lives... Boy Erased is a necessary, beautiful book.” —Garth Greenwell, author of What Belongs to YouA beautiful, raw and compassionate memoir about identity, love and understanding.   The son of a Baptist pastor and deeply embedded in church life in small town Arkansas, as a young man Garrard Conley was terrified and conflicted about his sexuality.When Garrard was a nineteen-year-old college student, he was outed to his parents, and was forced to make a life-changing decision: either agree to attend a church-supported conversion therapy program that promised to “cure” him of homosexuality; or risk losing family, friends, and the God he had prayed to every day of his life. Through an institutionalized Twelve-Step Program heavy on Bible study, he was supposed to emerge heterosexual, ex-gay, cleansed of impure urges and stronger in his faith in God for his brush with sin. Instead, even when faced with a harrowing and brutal journey, Garrard found the strength and understanding to break out in search of his true self and forgiveness.By confronting his buried past and the burden of a life lived in shadow, Garrard traces the complex relationships among family, faith, and community. At times heart-breaking, at times triumphant, this memoir is a testament to love that survives despite all odds.A movie is in the works starring Nicole Kidman, Russell Crowe, and Lucas Hedges, directed by Joel Edgerton and produced by Anonymous Content and Focus Features. 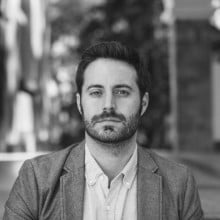 Garrard (pronounced without the final 'r;' a family oddity) Conley is the author of the memoir, Boy Erased, out from Riverhead (Penguin) May 2016. His work can be found in TIME, VICE, CNN, Buzzfeed Books, Virginia Quarterly Review, and many others
After growing up in a small Arkansan farming community, heading to a liberal arts college a few hours away, completing service for Peace Corps Ukraine, and attaining a Master's degree in creative writing and queer theory, Garrard taught literature in Sofia, Bulgaria at The American College of Sofia. He now lives in Brooklyn and teaches in NYC. 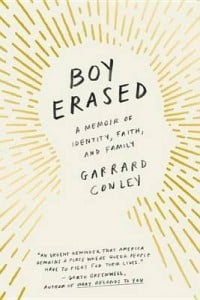