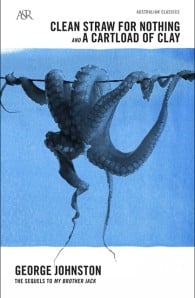 In the sequel to his semi-autobiographical novel My Brother Jack, George Johnston concludes his Meredith trilogy in this brilliantly evocative, single volume of books two and three: Clean Straw for Nothing (winner of the Miles Franklin Award) and A Cartload of Clay. Set against the backdrop of a Greek island, Clean Straw for Nothing follows the story of successful war correspondent and retired journalist David Meredith as he abandons his career for a life in exile with his beautiful wife Cressida. Johnston focuses on the developing relationship between David and Cressida, exploring the complex and reflective character of David as he questions the nature of success, sexual tensions, expatriation and ill-health. The questions are almost entirely unanswerable and the freedom David craves nearly impossible. In the final episode of the trilogy, David Meredith travels back to Australia, rediscovering his deep affection for his native land after having been so long in Greece. Coming to terms with his new home's deep faults and failings, as well as virtues, it is here that he reviews his life, his pursuit of success and his unfortunate failures. Still without a conclusion to his philosophical concerns, David comes to accept that the meaning of life is the journey we take and is not a price to be given at the end. 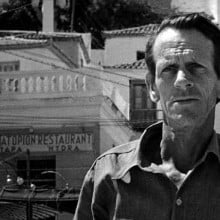 George Johnson died in 1970, at the age of 59, after a long battle with tuberculosis. Clean Straw for Nothing, first published in 1969, and A Cartload of Clay, first published in 1971, completed his Meredith trilogy - the first book of which is the highly acclaimed My Brother Jack. Despite a lack of formal education, Johnston became a renowned journalist and one of Australia's foremost war correspondents. The latter saw him travel extensively throughout the war and included his presence on board the USS Missouri for the signing of the peace treaty. His marriage to the writer and essayist Charmian Clift not only lead to further travel and their experience of expatriate life in England and in Greece, but also to much romanticising of their lives together. In many respects this has distracted attention from their distinctive and respective writing achievements. Both My Brother Jack and Clean Straw for Nothing won the Miles Franklin award and, in 1969, Johnston was awarded an OBE. Clean Straw for Nothing and A Cartload of Clay are introspective, cynical and bittersweet memories of a man torn between his past and present whilst enduring illness and contemplating death. Although written in differing styles, the search for answers to a convoluted past and a quest for meaning and truth make both books a remarkable memorial to George Johnston. 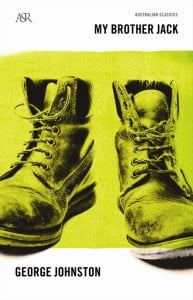 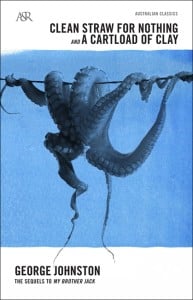