The true story of an English drug-smuggler, a notorious Bolivian prison and enough cocaine to cover the Andes ...Rusty Young, a twenty-something Australian law graduate, was backpacking in South America when he heard about Thomas McFadden, an English drug trafficker who ran tours inside Bolivia's notorious San Pedro prison. When Rusty met Thomas, they formed a surprising yet instant friendship and then became partners in an attempt to record Thomas's experiences in the jail. The result is one of the most compelling prison stories of all time.Marching Powder is a shocking, sometimes darkly comic account of life in San Pedro. In this bizarre prison, inmates are expected to buy their cells from real estate agents. Others run shops and restaurants, and women and children live with imprisoned family members. Violence and crime are never far away, and the jail contains some of Bolivia's busiest cocaine laboratories. In San Pedro, cocaine makes life bearable - even the prison cat is addicted to crack.Yet amid, the corruption, brutality and the daily struggle for survival, Marching Powder is also the tale of an unlikely friendship, forged in the oddest of circumstances, between a drug smuggler and a lawyer. It is the story of one of the strangest places on earth, where horror is leavened by humour and where cruelty lives side by side with compassion.

Rusty Young is the author of the international bestseller Marching Powder, the true story of an English drug smuggler in Bolivia’s notorious San Pedro Prison. He grew up in Sydney, and studied Finance and Law at the University of New South Wales. However, following the global success of Marching Powder he settled in Bogotá, Colombia for seven years. Since 2011, Rusty’s house in Bogotá has been the headquarters for a local charity that supports former child soldiers exiting the civil war, teaching them valuable life skills. Colombiano is his first novel. 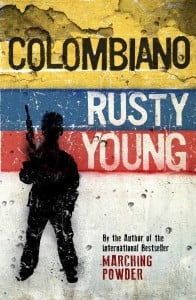 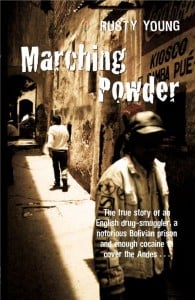