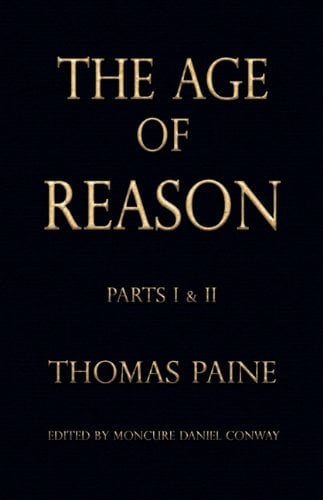 The Age of Reason

The Age of Reason, written by British and American revolutionary Thomas Paine,  challenges institutionalised religion and the legitimacy of the Bible, . Published in three parts in 1794, 1795, and 1807, it was a bestseller in the United States, where it caused a short-lived deistic revival. British audiences, however, fearing increased political radicalism as a result of the French Revolution, received it with more hostility.The Age of Reason presents common deistic arguments; for example, it highlights what Paine saw as corruption of the Christian Church and criticises its efforts to acquire political power. Paine advocates reason in the place of revelation, leading him to reject miracles and to view the Bible as an ordinary piece of literature rather than as a divinely inspired text. It promotes natural religion and argues for the existence of a creator-God.Most of Paine's arguments had long been available to the educated elite, but by presenting them in an engaging and irreverent style, he made deism appealing and accessible to a mass audience.#72 in ABC My Favourite Book 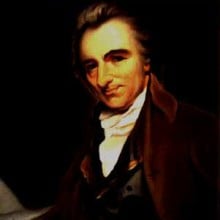 Thomas Paine was born on the twenty-ninth of January 1737 at Thetford, Norfolk in England, as a son of a Quaker. After a short basic education, he started to work, at first for his father, later as an officer of the excise. During this occupation Thomas Paine was an unsuccessful man, and was twice dismissed from his post. In 1774, he met Benjamin Franklin in London, who advised him to emigrate to America, giving him letters of recommendation.Paine landed at Philadelphia on November 30, 1774. Starting over as a publicist, he first published his African Slavery in America, in the spring of 1775, criticising slavery in America as being unjust and inhumane. At this time he also had become co-editor of thePennsylvania MagazineOn arriving in Philadelphia, Paine had sensed the rise of tension, and the spirit of rebellion, that had steadily mounted in the Colonies after the Boston Tea party and when the fightings had started, in April 1775, with the battles of Lexington and Concord. In Paine's view the Colonies had all the right to revolt against a government that imposed taxes on them but which did not give them the right of representation in the Parliament at Westminster. But he went even further: for him there was no reason for the Colonies to stay dependent on England. On January 10, 1776 Paine formulated his ideas on american independence in his pamphlet Common Sense.In his Common Sense, Paine states that sooner or later independence from England must come, because America had lost touch with the mother country. In his words, all the arguments for separation of England are based on nothing more than simple facts, plain arguments and common sense. Government was necessary evil that could only become safe when it was representative and altered by frequent elections. The function of government in society ought to be only regulating and therefore as simple as possible. Not surprisingly, but nevertheless remarkable was his call for a declaration of independence. Due to the many copies sold (500.000) Paine's influence on the Declaration of Independence of July 4, 1776 is eminent. Another sign of his great influence is the number of loyalist reactions to Common Sense.During the War of Independence Paine volunteered in the Continental Army and started with the writing of his highly influential sixteen American Crisis papers, which he published between 1776 and 1783. In 1777 he became Secretary of the Committee of Foreign Affairs in Congress, but already in 1779 he was forced to resign because he had disclosed secret information. In the following nine years he worked as a clerk at the Pennsylvania Assembly and published several of his writings.In 1787 Thomas Paine left for England, initially to raise funds for the building of a bridge he had designed, but after the outbreak of the French Revolution he became deeply involved in it. Between March 1791 and February 1792 he published numerous editions of his Rights of Man, in which he defended the French Revolution against the attacks by Edmund Burke, in his Reflections on the Revolution in France. But it was more then a defence of the French Revolution: An analysis of the roots of the discontent in Europe, which he laid in arbitrary government, poverty, illiteracy, unemployment and war. The book being banned in England because it opposed to monarchy, Paine failed to be arrested because he was already on his way to France, having been elected in the National Convention. Though a true republicanist, he was imprisoned in 1793 under Robespierre, because he had voted against the execution of the dethroned king Louis XVI. During his imprisonment the publication of his Age of Reason started. Age of Reason was written in praise of the achievements of the Age of Enlightenment, and it was on this book that he was accused of being an atheist.After his release he stayed in France until 1802, when he sailed back to America, after an invitation by Thomas Jefferson who had met him before when he was minister in Paris and who admired him. Back in the United States he learned that he was seen as a great infidel, or simply forgotten for what he had done for America. He continued his critical writings, for instance against the Federalists and on religious superstition.After his death in New York City on June 8, 1809 the newspapers read: He had lived long, did some good and much harm, which time judged to be an unworthy epitaph. 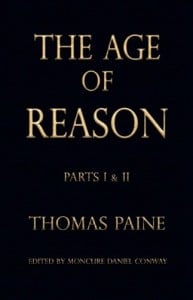 The Age of Reason