This mesmerizing Australian novel has been a bestselling book around the world, and Hollywood movie rights were recently snapped up by Dreamworks, with David Heyman (Harry Potter) set to produce. It is the winner of three prestigious ABIA awards, including their 'Book of the Year', and also won the Indie Awards' 'Book of the Year'.1926. Tom Sherbourne is a young lighthouse keeper on a remote island off Western Australia. The only inhabitants of Janus Rock, he and his wife Isabel live a quiet life, cocooned from the rest of the world.Then one April morning a boat washes ashore carrying a dead man and a crying infant - and the path of the couple's lives hits an unthinkable crossroads.Only years later do they discover the devastating consequences of the decision they made that day - as the baby's real story unfolds ...Winner of three ABIA awards for Best Newcomer, Best Literary Novel and Book of the Year Winner of two Indie Awards for Best Debut and Book of the Year Winner of the Nielsen BookData Bookseller's Choice Award for 2013 Recently voted Historical Novel of 2012 by GoodReads' reading community 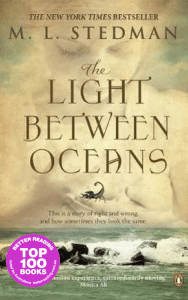