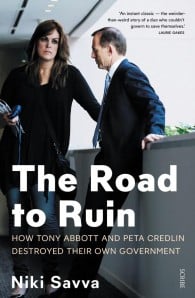 Kevin Rudd was given no warning, but even he lasted longer than Abbott. Julia Gillard had plenty of warnings, but even she lasted longer than Abbott.Abbott ignored all the warnings, from beginning to end — the public ones, the private ones, from his friends, his colleagues, the media.His colleagues were not being disloyal. They did not feel they had betrayed him; they believed he had betrayed them. Their motives were honourable. They didn't want him to fail; they wanted the government to succeed, and they wanted the Coalition re-elected.Abbott and Credlin had played it harder and rougher than anybody else to get where they wanted to be. But they proved incapable of managing their own office, much less the government. Then, when it was over, when it was crystal-clear to everyone that they had failed, when everyone else could see why they had failed, she played the gender card while he played the victim.In The Road to Ruin, prominent political commentator, author, and columnist forThe Australian Niki Savva reveals the ruinous behaviour of former prime minister Tony Abbott and his chief of staff, Peta Credlin. Based on her unrivalled access to their colleagues, and devastating first-person accounts of what went on behind the scenes, Savva paints an unforgettable picture of a unique duo who wielded power ruthlessly but not well.

Niki Savva is one of the most senior correspondents in the Canberra Press Gallery. She was twice political correspondent on The Australian, and headed up the Canberra bureaus of both The Herald Sun and The Age. When family tragedy forced a career change, she became Peter Costello's press secretary for six years and was then on John Howard's staff for three. Her work has brought her into intimate contact with the major political players of the last 35 years. She is now a regular columnist for The Australian, and often appears on ABC TV's The Insiders as well as on political panels on Sky. 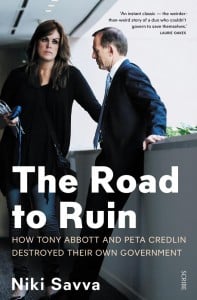