The Story of Australia’s People 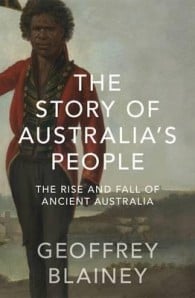 The vast, ancient land of Australia was settled in two main streams, far apart in time and origin.The first stream of immigrants came ashore some 50,000 years ago when the islands of Australia, Tasmania and New Guinea were one. The second began to arrive from Europe at the end of the eighteenth century. Each had to come to terms with the land they found, and each had to make sense of the other. It was not – and is still not – an easy relationship, and the story of Australia's people is as complex as it is rich.The long Aboriginal occupation of Australia witnessed spectacular changes. The rising of the seas isolated the continent and preserved a nomadic way of life as agriculture revolutionised other parts of the world. Over millennia, the Aboriginal people mastered the land's climates, seasons and reserves.Traditional Aboriginal life came under threat the moment Europeans crossed the world to plant a new society in an unknown land. Australia was to be a land that rewarded, tricked, tantalised and often defeated the new arrivals. The meeting of the two cultures is one of the most difficult meetings in history.In The Story of Australia's People, Professor Geoffrey Blainey returns to the subject of his most celebrated works on Australian history, Triumph of the Nomads (1975) and A Land Half Won (1980), retelling the story of our history up until 1850 in light of the latest research and archaeological findings. Some of those findings have led him to change his mind about vital aspects of Aboriginal history, examined more fully here than in any other popular history of Australia yet published.Compelling, groundbreaking and brilliantly readable, The Story of Australia's People is the first installment of an ambitious two-part work, and the culmination of the life work of Australia's most respected historian.

Geoffrey Blainey is one of Australia's most significant and popular historians. He has written some 36 full-length books including The Tyranny of Distance, Triumph of the Nomads, Black Kettle and Full Moon, A Short History of the 20th Century, Sea of Dangers, A Short History of Christianity and the best-selling A Short History of the World. Professor Blainey held chairs in economic history and then in plain history at the University of Melbourne for 21 years.He was a delegate to the 1998 Constitutional Convention and also chaired various Commonwealth government bodies, including the Australia Council, the Literature Board, the Australia-China Council, and the National Council for the Centenary of Federation. He is one of the few Australians whose biography appears in Encyclopaedia Britannica. 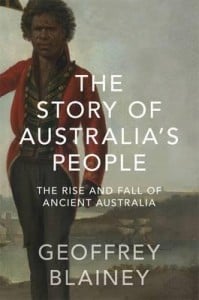 The Story of Australia's People