Dalton Trumbo was the central figure of the infamous 'Hollywood Ten,' the screenwriters who, during the McCarthy era, were charged by the House Committee on Un-American Activities for their associations with the Communist Party. Due to their refusal to cooperate during the investigation, Trumbo and his fellow screenwriters were declared in contempt of Congress and were ultimately blacklisted from Hollywood and some were even jailed.Although Trumbo was one of several hundred writers, directors, producers, and actors who were deprived of the opportunity to work in the motion picture industry from 1947 to 1960, he won an Oscar under the pseudonym Robert Rich for The Brave One in 1956, and he was the first to see his name on the big screen again in 1960 with Exodus, one of the year's biggest movies.All his life Trumbo was a radical of the homegrown, independent variety. From his early days in Colorado, where his grandfather was a county sheriff, to his time in Los Angeles, where he organized a bakery strike and was even a bootlegger, to his time as an author when he wrote the powerful pacifist novel Johnny Got His Gun, to his heyday as a top-paid (and frequently broke) Hollywood screenwriter-where his credits includeRoman Holiday, Spartacus, Papillon, Lonely Are the Brave, Thirty Seconds Over Tokyo, The Brave One, and Kitty Foyle-his life rivaled anything he had created.Written with Dalton Trumbo's full cooperation, at a moment when he himself did not know how much time he had left, Trumbo is a candid tale of a colorful figure who was at the epicenter of a tumultuous period in recent American history. Now a major motion picture, and star Bryan Cranston was nominated for an Oscar, BAFTA and Golden Glove for the role!

Bruce Cook (1932-2003), veteran critic, journalist, and author, originally wrote this biography with Dalton Trumbo's full cooperation in 1976. In his lifetime Cook wrote a total of 23 books, both fiction and nonfiction, including eleven mystery novels featuring the real-life historical figure of Sir John Fielding, magistrate of the Bow Street court during the latter half of the 18th century, and a crime fiction series featuring LA private detective Chico Cervantes. Cook's last completed novel, Young Will: The Confessions of William Shakespeare, was published posthumously.Born in Chicago, Bruce Cook lived in Los Angeles and Paris with his wife, the violinist Judith Aller. 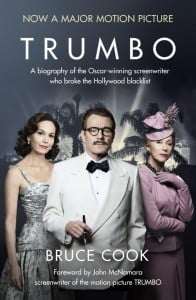