There are lots of great new books on offer this month so Better Reading have selected a few highlights for you. We’ve included something for all ages and a mix of fiction and non-fiction. Hope they get your children reading. Enjoy! 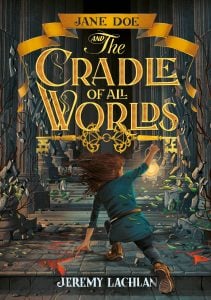 Jane Doe and the Cradle of all Worlds by Jeremy Lachlan

Step inside. Don’t look back. Forward is the only way. His Dark Materials meets Mad Max in this unforgettable blockbuster adventure about the world between worlds.

When a fierce quake strikes the remote island of Bluehaven, and her father disappears, Jane Doe is thrown headfirst into an epic quest to bring him home.

But this ain’t no ordinary rescue mission. Her father is lost in a place between worlds; a dangerous labyrinth of shifting rooms, infernal booby traps and secret gateways. And Jane has to find him fast, because someone else is searching for him, too. A man who knows her father’s secrets. A man who has an army.

With a pyromaniac named Violet and the enigmatic Hickory by her side, Jane is about to discover that this adventure is even bigger on the inside than it looks …

This is the blockbuster adventure the worlds have been waiting for. From the mad-cap best-selling author of Thai-riffic! Con-nerd and The Other Christy comes this completely inside out, crazy tale of a very reluctant hero who might just find out he’s a natural born loser – ahem – leader.

I’m Raymond, and my school is a joke. It’s full of bullies and troublemakers.
My solution? Be a nobody and fade into the background.

But our new principal has blown my cover because he’s chosen me as a prefect!
It was looking pretty bad, until I made a crazy promise to get new air con for the classrooms. 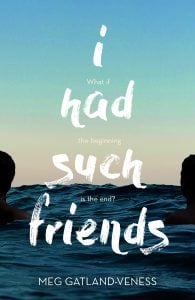 I Had Such Friends by Megan Gatland-Veness

When Charlie Parker dies it affects everyone who knew him. Everyone, that is, except for Hamish Day, the boy with only one friend, who lives on a cabbage farm. After a tragic car accident leaves his school in grief, Hamish finds himself pulled into the lives of the people left behind. He tries his best to thread them back together again, even though he is pretty sure he’s the least qualified person for the job.

With hard-hitting themes of unrequited love, sexuality, bullying, death and suicide, readers will take part in a poignant story about self-discovery, grief and the tragic power of silence. A gripping look at adolescent pain with a narrative maturity that accurately reflects its YA milieu, I Had Such Friends pushes us to reflect on our own sliding doors ‘moment.

Who are you to someone else, and what part do you play in his or her story’ I’m scared of the dark . . . But Grandpa says we can still have FUN so he’s taking me camping. Maybe I’ll be able to have space Adventures like him one day . . .

Join the creative team behind best-selling picture book Grandpa’s Big Adventure on a new voyage full of out-of-this-world delights and cosmic dangers. This time Grandpa and his grandson explore a new fear – the dark. But through Grandpa’s hilarious jokes and tall tales, his grandson discovers the amazing things you can see at night-time. High Five to the Boys by Various Authors

A Celebration of Ace Australian Men

Let’s cheer for the men who have done amazing things in Australia’s history and for our future!

Australia has some seriously ace men who have broken new ground, stood up for what they believed in, achieved incredible things and defied stereotypes. You’ll find some of those men inside the pages of this book – from astronaut Andy Thomas to YouTube maths teacher Eddie Woo, sportsman Johnathan Thurston and dancer David McAllister. Whether they end up being role models for girls or boys, it doesn’t matter, because they’re ace regardless!

Brought to life by colourful illustrations from Australian male artists, High Five to the Boys is an uplifting and illuminating read for all ages.

Royalties from sales of this book go to The Smith Family. A bright and colourful look at twelve incredible Australian women who helped shape our country, from politics and the arts to Indigenous culture, science and more.

Meet twelve amazing Australian women who have changed the world, in small ways and large.

Some of them are world famous, like Annette Kellerman and Nellie Melba.

Some of them are famous in Australia, like Mary Reibey and Edith Cowan.

All of them deserve to be famous and admired.

These women are the warriors who paved the way for the artists, business owners, scientists, singers, politicians, actors, sports champions, adventurers, activists and innovators of Australia today. The Peski Kids: The Mystery of the Squashed Cockroach by R.A. Spratt

Three squabbling siblings. One all too perfect next-door neighbour. A missing mum, a bumbling dad, a kooky cockroach mystery and an eccentric country town. What could possibly go wrong?

Life is hard enough without having to spend time with your siblings. But there is no other way for Joe, Fin and April Peski to solve the mystery of the cockroach catastrophes that is rocking their new home town of Currawong.

Along with Loretta, their stunningly beautiful yet sociopathic next-door neighbour, and Pumpkin, the world’s worst trained dog, they set out to catch the culprit. Together they are The Peski Kids.

I Had Such Friends

Jane Doe and the Cradle of all Worlds

High Five to the Boys