It’s official: The Diary of a Wimpy Kid series has achieved bookworld superstardom!

Number 15 in the Diary of a Wimpy Kid series has hit our bookstores. Pallets of books were strictly embargoed in warehouses and storerooms all around the world. Australian fans were among the first in the world to get their hands on the latest instalment of Greg Heffley’s misadventures and the excitement is truly astonishing! Kids all around Australia are finding somewhere quiet so they can read uninterrupted, and that is truly phenomenal.

How did this happen?

In 1998 Jeff Kinney, a young aspiring newspaper cartoonist, was trying to get his comic strips published. Facing the grim reality that maybe he wasn’t good enough at newspaper cartoons he decided to focus on other avenues to get his cartoons out into the world. Diary of a Wimpy Kid started life as an online webcomic sensation: a story about a primary school weakling named Greg Heffley shared as daily instalments.

In 2006 he signed a multi-book deal to turn it into a print series, publishing Diary of a Wimpy Kid in 2007 and enjoying immediate success. Funnily enough, Jeff thought that his book would sit in the Humour section of bookstores, as he thought the readers would be adults. Luckily his publisher recognised the full potential: Jeff and his characters are loved by children in over 66 different countries in 65 different languages!

The Diary of a Wimpy Kid series consistently appears in bestseller lists and Jeff has been named one of Time Magazines most influential people in the world (something he could barely believe himself –  he is on record as saying that he wasn’t even the most influential person in his house). He is also the creator of Poptropica, which was named one of Time Magazine’s 50 best websites. Jeff, his wife and sons live in Plainsville, Massachusetts where they own a bookstore called “An Unlikely Story”. The headquarters for Diary of a Wimpy Kid sit above the bookstore. It’s a creative empire run by a dedicated team and Jeff has realised his rock-star dreams.  Now there are 15 books in the series, with four additional books, a spin-off series, movies and countless ancillary products.

So, what’s it all about? Just trust us when we say it is very funny. The Wimpy Kid, Greg, finds himself in all sorts of awkward situations that children and adults find completely relatable. The situations with family and friends are universal and the reader recognises themselves in the characters.  In many ways, Jeff is holding up a mirror to kids, and they totally identify.

Here’s a quick summary of the 15 books in the Diary of a Wimpy Kid Series (without spoilers):

#1 Diary of a Wimpy Kid: Greg Heffley starts at a new school, where undersized weaklings share the hallways with kids who are taller, meaner, and already shaving. The hazards of growing up before you’re ready are uniquely revealed through words and drawings as Greg records them in his diary.

#2 Rodrick Rules: Greg’s brother, Rodrick threatens to reveal an embarrassing secret from last summer. But secrets have a way of getting out . . . especially when a diary is involved.

#3 The Last Straw: Greg’s father, Frank, plans to send him to a military school to toughen him up. Greg realises he has to shape up…. or get shipped out!

#4 Dog Days: It’s summer vacation and Greg just wants to stay indoors but his mother has other ideas, especially as there is a new family member to consider.

#5 The Ugly Truth: Greg face the reality of growing up with a visit to a new dentist, learning about puberty and other challenges

#6 Cabin Fever: The whole family are stranded in the house during a blizzard. Greg fears he will go to jail for accidentally vandalising his school.

#7 The Third Wheel: Greg scrambles to find a date for the Valentine Day’s dance. Somehow he and Rowley create a mix up with Abigail. Who will be left out?

#8 Hard Luck: Greg’s best friend has a girlfriend. Things look grim so Greg decides to use a magic 8-ball to make decisions and turn his life around.

#9 The Long Haul: The whole Heffley family go on a road trip over summer, much to Greg’s dismay. But even the worst road trip can be an adventure!

#10 Old School: Greg’s mother petitions the town to unplug and go electronics free for a weekend. But Greg doesn’t seem to be cut out for an old-fashioned world.

#11 Double Down: Greg’s parents want him to broaden his horizons beyond computer games. He discovers an old video camera and decides to make a movie and become rich and famous.

#12 The Getaway: The Heffley’s decide to escape to a tropical resort for Christmas but what should have been a stress-free holiday becomes a holiday nightmare.

#13 The Meltdown: It’s winter and Greg and Rowley become the targets in an epic neighbourhood snowball fight. It’s a fight for survival with alliances, betrayals, and warring gangs.

#14 Wrecking Ball: The Heffleys receive an unexpected inheritance and decide to renovate the house but they soon find that home improvement isn’t all it’s cracked up to be.

#15 The Deep End: The Heffleys hit the road for a camping trip, ready for the adventure of a lifetime but they become stranded in a holiday park that is not exactly a summertime paradise.

Read them in sequence or just choose whichever takes your fancy. Every single one is certain to be a winner! 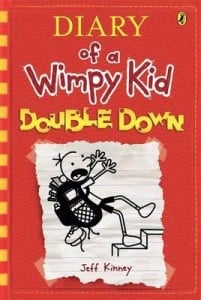 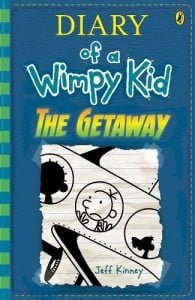 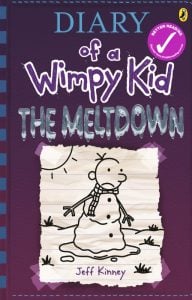 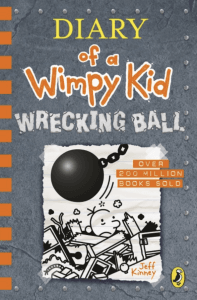 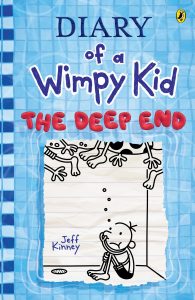