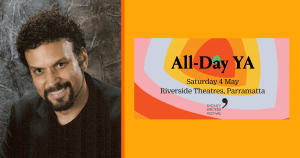 It’s rare for a writer to have their first book published at the tender age of 24 but New York Times best-selling author Neal Shusterman doesn’t see youth as a disadvantage. In fact, he is a big believer that teens should be presented with serious issues to consider. His new book Dry, a collaboration with his son Jarrod, looks at climate change and what would happen if our water supply ran out.

In Sydney this week for the Sydney Writer’s Festival, Shusterman will speak on the writing of environmental catastrophe, with fellow authors Lili Wilkinson (After the Lights Go Out) and Claire G. Coleman (Terra Nullius). It’s a subject he’s well versed on. He spends a considerable amount of time in the US talking at high schools to students who definitely take the issue of climate change very seriously.

“I think we don’t give kids enough credit. We tend to think they are shallow and into social media but kids have deep thoughts about a lot of serious issues and have opinions that are worth listening to. I think as a writer it’s important to challenge them to look at the world in new and different ways and to really give thought to the issues that are shaping our world and our lives.”

The idea for Dry came from a conversation Neal and Jarrod had while sitting in heavy LA traffic. They started to consider what would happen if there was a natural disaster and they needed to escape quickly. They discussed how difficult this might be particularly if there are millions of people impacted.

“We were talking about the drought and water shortage in southern California – what If the water just turns off you’ve got there’s 24 million people and no source of fresh water… What would it be like to be caught in a suburban area where you take water for granted and suddenly there’s no water in the taps the stores have sold out of water and you start to realise within a day there is going to be a very serious problem if you don’t find a place to go.”

Once they started researching water sources and other details around water supply, they began to realise that this was a story that needed to be told. The result is Dry, which has been very well received and was recently awarded the 2019 Green Earth Book Award.

While in Australia Neal will also be attending the Scribbler’s Festival and talking about a very different topic ‘When Hollywood Calls’. Shusterman has written for Goosebumps and the Disney Channel and finds it very rewarding to have his stories as the focus of a screen adaptation but it’s also frustrating.

“There’s not control of content in that world, it’s like being an architect; you design a beautiful home and then you sell it somebody that then wants to paint it pink with purple polka dots you have no control over what they’re going to do with the house. But it’s also rewarding to see a lot of people get behind something that you created and then make it their own. There’s something very wonderful about that.”

However, Neal is conscious that many of the teens that he is talking to may have writing aspirations and he knows what it really takes to improve as a writer – hard work.

“It’s important to write. Don’t give in to writer’s block, don’t believe in writer’s block… you have to work your way through it. You have to finish what you start and then get on to the next one. Revision is extremely important. You have to be willing to re-write and listen to criticism. You have to read and read outside of your comfort zone, read all different kinds of things. And you have to keep at it… the more you write the better you get.”

Find out more about Dry by Neal and Jarrod Shusterman