Dreaming big, flying high: Check out our review of The Tunnel of Dreams by Bernard Beckett Award-winning New Zealand author Bernard Beckett has delivered a beautifully crafted and polished new fantasy novel for middle-grade readers. He is a master craftsman at the top of his game, and I am hopeful that this is the book that will bring him to the attention of even more Australian readers. It is an absolutely effortless read: a guaranteed great read at a cracking pace with a totally escapist scenario. There are echoes of The Hunger Games and the trials of Harry Potter and Morrigan Crow. The landscape hints of Wilderpeople and Hobbits. Concepts such as interspecies communication and mind-reading are carefully developed and introduced at the appropriate point of the story, drawing skillfully on our belief in the possibilities of this parallel world. This story originated as a series of nightly bedtime tales for the author’s two sons and I can imagine the anticipation each evening to hear the next instalment as there are many “cliff hangers” in the tale.

Twin brothers Arlo and Stefan sneak out of their home in the dead of night to investigate a mysterious light in an abandoned house in their neighbourhood. They encounter Alice, a young girl who leads them to a magical tunnel that only opens on a full moon when identical twins are present. Alice convinces the boys to accompany her through the tunnel, planning to rescue her identical twin sister who has been taken prisoner by the Royal Guard in this parallel world, where people and places seem eerily familiar but where nothing is the same.

Alice has a plan which she slowly reveals to Arlo and Stefan, while simultaneously drawing them deeper into the world and helping them survive. Rescuing her sister Jackie seems impossible, but Alice proves to be very determined and capable so the boys are soon convinced they can trust her. Through artful subterfuge, Stefan joins the three-week competition to join the Royal Guard. They hope that once he is successful, he can sneak Arlo and Alice in so that together they can rescue Jackie. The competition is fierce and not everyone is who they seem to be. Many elements need to align for this plan to be successful. Will promised assistance from unexpected sources arrive when they need it most? Can they harness their magic and use it successfully under pressure? Evil lurks menacingly in the background: will love and trust conquer over fear and greed?

Bernard Beckett usually writes for young adults: this is his first middle-grade novel and he’s absolutely nailed it! Fast-paced and exciting action sequences have a cinematic quality. The setting in our “almost world” is both magical and grounded. It’s a cracking read for readers 10+. It’s perfect for fans of Harry Potter, Narnia, Nevermoor or action series like Robert Muchamore’s Robin Hood or Eoin Colfer’s Artemis Fowl. Escape to a parallel world: Check out an extract from The Tunnel of Dreams by Bernard Beckett 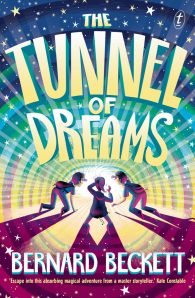 In the dusty shadows of an abandoned house, twins Stefan and Arlo discover a secretive girl. Alice is smart and strong and not happy to have her hideout found, but she needs their help—her twin sister is locked in a cage suspended high above a mysterious mine in a parallel world.Will the brothers meet her at midnight on the next full moon at the entrance to a tunnel Stefan and Arlo both know can’t possibly exist?Except that it does. And when they travel through it, the twins find themselves on a dangerous and difficult quest that will challenge all their ideas of who they are and what they can do.The Tunnel of Dreams is a delightful middle-grade fantasy adventure about friendship and loyalty, and about dreaming big and achieving the impossible. 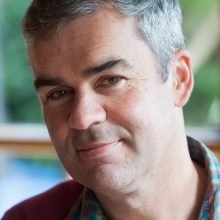 Bernard Beckett is a multi-award-winning author of books for adults and young adults and one of New Zealand’s most outstanding writers. The Tunnel of Dreams is his first middle-grade novel. He lives near Wellington with his family. 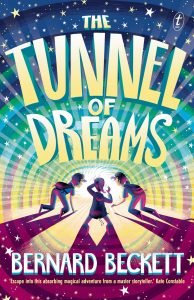 The Tunnel of Dreams