Eragon’s Quest: Review of The Fork, The Witch, and The Worm by Christopher Paolini Bestselling author Christopher Paolini is back with a brand-new standalone book full of stories set in the world of Eragon and the Inheritance Cycle. 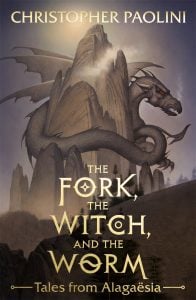 Set a year after Eragon has left Alagaesia, his latest quest is to find a place to train a new cohort of Dragon Riders. Saphira (his dragon) joins him in selecting Mount Arngor as the site of their new endeavour.

Along with working and negotiating with dwarves, eldunari, humans, urgals and elves, Eragon must also keep the peace and handle the logistics of construction.

In addition to an account of Eragon’s progress on his quest, the book features three original stories set in Alagaësia: Part one: The Fork, tells the tale of young girl Essie and an important lesson she learns about facing her fears: The Witch, focuses on an excerpt from the memoir of witch and fortune-teller Angela the herbalist – written by the author’s sister Angela Paolini, the inspiration for the character, and finally The Worm, is a story of endurance, bravery and acceptance.

With a detailed section on names and languages – including their origin and a chapter on pronunciation, young readers are encouraged to not only immerse themselves in this world but look for further avenues of related research.

Readers who have enjoyed the Inheritance series will be familiar with many of the characters and settings; however, for those who are less familiar and would like to have a glimpse at this internationally best-selling fantasy world before committing to the four lengthy volumes in the series, this new book is the perfect solution.

Dedicated Paolini fans will be over the moon that they can feed their hunger for more from this fantasy world, and we have been assured there will be more short stories to come. In the meantime, there are of course lots of resources and other ways to extend interest in this.

The multi layered worlds that Paolini creates are for 10+ readers who enjoy Garth Nix, Phillip Pullman, Rick Riordan, Lord of the Rings and Fantastic Beasts, although many older readers are indulging too.

Astoundingly, Christopher was fifteen when he wrote the first draft of Eragon and once published, his book immediately became a New York Times Best Seller. In 2011, the Guinness World Records recognized him as the “youngest author of a bestselling book series.” So for aspiring writers, his back story is very inspirational. 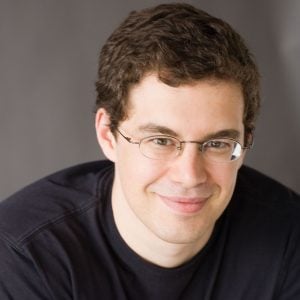 Christopher Paolini is the author of the international bestsellers Eragon, Eldest, Brisingr, and Inheritance, along with Eragon’s Guide to Alagaësia. His most recent book, The Fork, the Witch, and the Worm, released in the U.S.A. on December 31, 2018. He resides in Paradise Valley, Montana, USA.

Purchase a copy of The Fork, The Witch, and The Worm here For Lovers of The Inheritance Cycle: Read an extract from The Fork, the Witch, and the Worm by Christopher Paolini 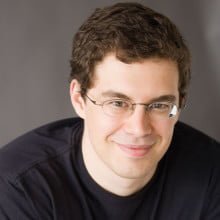 Christopher Paolini was educated at home by his parents. His abiding love of fantasy and science fiction inspired him to begin writing his debut novel, Eragon, when he graduated from high school at fifteen. He became a New York Times bestselling author at nineteen. Christopher lives in Montana, USA, where the dramatic landscape fed his vision of Alagaesia. He is at work on the final volume in the Inheritance trilogy. 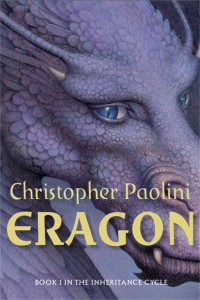 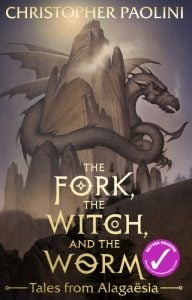