Kids’ Book of the Week: Hamish and the Gravityburp by Danny Wallace 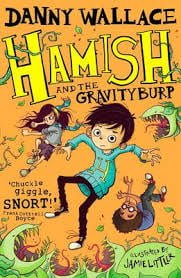 Hamish and the Gravityburp might look like a completely ordinary book. But it’s not. It’s a book that knows things. It knows who you are, that you had cake not too long ago, that your birthday is in less than a year, and even moreso, that you’re not going to be able to resist picking it up and reading it. Because Hamish and the Gravityburp is, in all honesty, not an ordinary book. It’s an extraordinary one.

The new book following Hamish and the PDF (Pause Defence Force), headed up by Hamish and his best friend Alice, is a riot. Danny Wallace has brought us yet another gem of genuinely funny children’s literature. Sure, his past career as a comedian helps, but his tour-de-force is truly his stories following Hamish Ellerby and friends. There’s two books in the series before this (Hamish and the Worldstoppers and Hamish and the Neverpeople), but this new book really takes the cake. It’s funny, action packed, thoughtful, and really captures the mind of children – well, as much as it can when those children are fighting an intergalactic space invasion.

Hamish and the Gravityburp starts as Hamish Ellerby comes home from school to find his family inexplicably floating on the roof. It’s a huge mess, what with screaming and confusion and vacuum cleaners rising to the ceiling, but just as suddenly as it started, it’s over. Everyone comes back to the ground and gravity is back to normal. But Hamish and his dad know better. They know it’s just the beginning, and they’ll be more gravity burps to come… and maybe even one day a gravity belch…

What follows is a hilarious adventure filled with all sorts of shenanigans. Seeds fall from the sky, giant plants threaten villages, aliens invade the world and attempt to take over Britain’s fourth most boring town. Kids will have a blast reading through the adventures, chuckling at the humour Wallace weaves so effortlessly into his writing, and cheering on the band of kids that take on the world’s newest threat. They’ll love that the adults in the book are always a step or two behind the clever ten year olds, and it’s really up to the kids to save the day. Adults reading along will love the many science-fiction references Wallace makes, from Day of the Triffids to Independence Day.

It’s not just fun and games, though. Hamish and the Gravityburp, despite its name, is genuinely touching at times. It beautifully examines the father-son relationship, about when parents need to trust their kids, and when children need to know that what their parents do is out of love, even if they can’t always understand the reason. As well, there are some really awesome characters. It’s not just a book for boys – Alice is a spunky ten year old girl who really knows how to get things done.

Hamish and the Gravity Burp is really worth a read. Another standout of the novel is the clever typesetting. Fonts change and grow according to character and the action, and there’s quirky illustrations from talented Jamie Littler on nearly every page. It’s a gripping read. Your kids will love it, you’ll have a lot of fun reading it, and trust us – you’ll be itching for the next Hamish novel as soon as you put this one down.

Danny Wallace is a cult leader, a producer, and a comedian. He is the author of the number one British bestseller Join Me , which is currently being adapted for film. BBC America recently and bizarrely dubbed him “one of Britain’s most respected journalists,” but perhaps Playboy had a more accurate description of him: “F***ing brilliant.” He is twenty-seven and lives in an old match factory in London.

Start reading an extract here, grab your own copy, and and follow Better Reading Kids on Facebook for even more kids book recommendations. 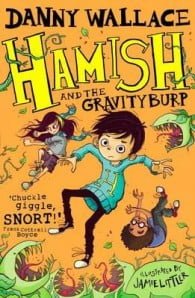 Another hilarious adventure from bestselling author Danny Wallace, perfect for fans of David Walliams, Roald Dahl, David Baddiel and David Solomons! This may look like just a completely and utterly ordinary book. But it's not. This book knows something terrifying: that the people of Earth face their gravest, grimmest threat yet! When Hamish arrives home to find his mum and his brother lying flat on their backs ON THE CEILING, he knows there's something seriously wrong (again) in the town of Starkley. What is the strange burping noise he keeps hearing? Why are weird seeds suddenly falling from the sky? And should he be worried about the odd woman with a cone around her neck? All Hamish and his gang the PDF can be sure of is that an adventure is coming. And that means two things: 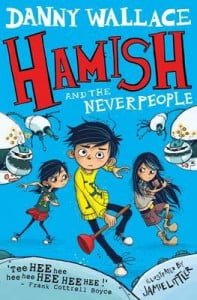 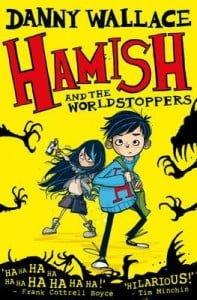 Danny Wallace is a cult leader, a producer, and a comedian. He is the author of the number one British bestseller Join Me, which is currently being adapted for film. BBC America recently and bizarrely dubbed him "one of Britain's most respected journalists," but perhaps Playboy had a more accurate description of him: "F***ing brilliant." He is twenty-seven and lives in an old match factory in London. 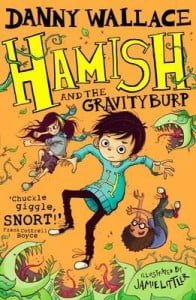