Q&A with Stephanie Smee, Translator of The Adventures of Pelle No-Tail If you and your kids love cute little animals, we promise you’ll become addicted to The Adventures of Pelle No-Tail! We spoke to translator Stephanie Smee about Pelle No-Tail, working with her mother, and just how she learnt so many languages!

Better Reading Kids: Congratulations on your new translation, The Adventures of Pelle No-Tail! Tell us about the book.

Stephanie Smee: Thank you! The Adventures of Pelle No-Tail is the first in a wonderful series of children’s books written by Swedish author Gösta Knutsson, and I think it’s fair to say that Pelle really is Sweden’s favourite cat! Pelle is a loveable character whose tail was bitten off by a rat when he was a kitten, and he has been the butt of many a joke as a result. Pelle is taken in by a new family in town after he stows away in the back seat of a car from his home on the farm where he was born. Once in town, however, he comes across nasty Måns, the town tomcat, and his side-kicks, the rather dim Bill and Bull, who set out to make life difficult for him, but with a bit of good humour and quick-wittedness, Pelle usually comes out on top!

BKR: You worked on this book with your mother, Ann-Margrete Smee. How was it working together?

SS: Working with my mother has been such fun – we laughed a lot! We literally sit at our desk, side-by-side, (I do the typing, because I’m faster!), working through the text, chatting about possibilities, the best constructions, the nuances in the language. Sometimes you don’t realise that things need changing or reconsidering until you’ve typed the sentence! It has certainly made what is usually a very solitary task far more enjoyable and collaborative. Knutsson was very fond of little poems and puns and they can be very tricky to translate so often we would need to “retreat” from the text and come back to it a little later. And proofreading was always done separately. You need that quiet time to reflect more carefully on the text – we chat too much when we’re doing the first draft!

BKR: The Adventures of Pelle No-Tail was originally in Swedish. Do you have Swedish heritage?

SS: My mother, Ann-Margrete, is Swedish although she has now lived in Australia for longer than she lived in Sweden. She met my father in Geneva, in Switzerland, and so the first language they spoke together was French. Dad soon learned Swedish also – he, too, is a fantastic linguist, although his main languages are more on the classical side (Latin and Ancient Greek) – but because mum was also trying to learn English for her university studies and did not have any other family here in Australia, we perhaps did not speak as much Swedish at home as we might have. My mother worked as a government interpreter and translator from Swedish to English before she started teaching as a French and German language teacher … as you can see, there have always been a lot of languages in the house!

BKR: Why did you decide to keep in Swedish names and some Swedish words in the English translation?

SS: We decided that it was important for children reading the stories in English to be reminded that Pelle is a Swedish cat! We kept the real street names of the Swedish town of Uppsala where Knutsson lived … you can even go on a “Pelle” walking tour if you should ever find yourself in that pretty town! We also thought it very funny to keep some of the hundreds of different ways the Swedish say “yes” … it gives you something to laugh about as you read it. And even these different words can be very evocative in their own way!

BKR: Why do you think little Pelle No-Tail has remained popular for so many years, since its publication in 1939?

SS: Knutsson has a wonderful lightness of touch with his language. He has extraordinarily perceptive observations of human personalities, which are embodied in beautifully drawn feline characters! The dynamics that play out between Pelle and Måns and the other cats are universal… and I think children continue to engage with those dynamics because they recognise them from their own experiences in the school yard.

BKR: You also speak French, Italian, and German. Why do you have such an interest in linguistics and translation?

SS: I guess I have just grown up in a house full of languages – we almost had as much foreign literature in the house as we did English and I think my parents’ interest and skill with languages must have rubbed off somewhere along the line. I think I just love playing with words … and I don’t think it really matters what language they’re in!

BKR: If you could learn another language, which would it be?

Oh, that’s a tricky one. I was recently on holiday in Chile and Argentina and I felt remiss that I had not spent more time learning Spanish. I feel it wouldn’t take me that long to pick it up so hopefully I’ll get a chance to do that one day! I would also go back to Italy any day to brush up on my Italian.

BKR: What’s next in line for you? Will you still be working on Pelle’s translations?

SS: Ann-Margrete and I are looking forward to starting work on the next in the Pelle series. I also have a couple of exciting French translation projects on the go, including a wonderful young adult/cross-over fiction series. Hopefully one day in the not-too-distant future I will have a chance to return to talk to you about that in more detail!

Read our review of The Adventures of Pelle-No Tail, pick up your own copy of the book here, and follow Better Reading Kids on Facebook for even more kids book recommendations! 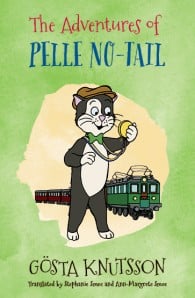 Little Pelle has no tail – it was bitten off by a rat when he was a kitten! But he doesn’t let that bother him.When Pelle leaves the farm where he was born and goes to live in the city, he meets lots of new friends and has all sorts of exciting adventures.But he also meets the nasty tomcat Måns, who loves nothing better than to make life difficult for Pelle...Parents and children alike will adore these charming, classic books, now translated into English for the very first time.