The Outsider: Read an extract from Jane Doe and the Cradle of all Worlds by Jeremy Lachlan 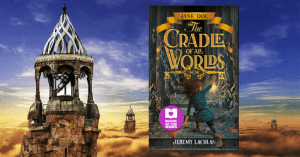 STEP INSIDE.
DON’T LOOK BACK.
FORWARD IS THE ONLY WAY.

The ‘Cursed One,’ the ‘Unwanted,’ the ‘Bringer of Bad Juju,’ – Jane Doe, has spent most of her life on the island of Bluehaven as an outcast. Yet surprisingly, Jane is the hero of this adventure.

In any case Jane has been underestimated by the citizens of Bluehaven and according to renowned adventurer Winifred Robin, she is the only chance they have to survive at a time when there are impending threats from other worlds. When new mayor Eric Atlas decides that Jane should be sentenced to death for causing a small earthquake, things start to get exciting.

At the centre of Bluehaven is a colossal building called the Manor, essentially a gateway for those who live in Bluehaven to leave and enter other worlds, but the Manor has been closed since Jane arrived withher father John fourteen years ago.

When Jane’s blood is spilt (fortunately not fatally) another earthquake rocks the island and the Manor opens just long enough for John to disappear inside. This sets off a chain of events that sees Jane entering the labyrinth in an effort to find her father, long lost mother and attempt to stop the evil that is threatening not only to take over Bluehaven and the Manor, but all worlds.

The first instalment in a new four book series, described as His Dark Materials meets Mad Max, Jane Doe and the Cradle of all Worlds is an epic adventure that is filled to the brim with exotic characters and eye-popping adventures. Find yourself digging through snow, riding rapids, avoiding booby traps and bounty hunters. 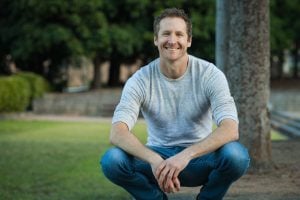 Jeremy Lachlan was born and raised in Griffith, country NSW, Australia. He completed his Honours degree in creative writing at the University of Canberra in 2004, and now calls Sydney home. As yet, he has won no writing prizes, but he did once take home $100 in a karaoke competition. He’s super proud of this. He came up with the idea for Jane Doe and the Cradle of all Worlds while lost in the Cairo Museum. It is his debut novel.