Big news in the world of children’s books: one of 2018’s most eagerly anticipated sequels has arrived. Nevermoor: The Trials of Morrigan Crow was the biggest-selling Australian children’s debut since records began.  This incredible piece of storytelling which gripped the hearts and minds of children everywhere, introduced 12-year-old Morrigan who had been cursed from birth, blamed for everything that went wrong, and was destined to die on Eventide.

Morrigan’s fate changed when Jupiter North, a Witness and a member of the Wunsoc High Council of Elders, appeared and whisked her off the fantastical city of Nevermoor.

In the just released sequel, Wundersmith: The Calling of Morrigan Crow, Jupiter North is now Morrigan’s patron and she has successfully gained a place in the prestigious Wunderous Society where members learn to use their knack or special power.

Morrigan’s knack is being a Wundersmith (traditionally they had the ability to grant wishes and protect). More recently though,this special gift has been abused and is now treated with extreme caution and suspicion. All other Wundersmiths aside from the evil Ezra Squall, have been eradicated and have gone down in history as selfish, excessive and dangerous.

So Morrigan is forced to keep her knack secret from all. Only Wunsoc’s High Council of Elders and Unit 919 – the group of other scholars she started with – know about it.

It looks like everything could turn around for Morrigan, however it is a bumpy ride from the outset, for people have been disappearing from the Wunderous Society, and she is only allowed to attend two classes – History of Heinous Wundrous Acts andDecoding Nevermoor: How to Successfully Navigate the Free State’s Most Dangerous and Ridiculous,and there is a growing suspicion abouther secret knack.

When Unit 919 start receiving blackmail letters from The Charlton Five who declare they will reveal ‘the terrible truth about Unit 919,’ Morrigan’s fellow scholars start to exclude and resent her.

Read our full review | Purchase a copy of Wundersmith

Jessica Townsend lives on the Sunshine Coast in Queensland. Her pet fascinations include public transport, ancient cities, hotels, opera singers, Halloween, secret societies and gigantic cats – all of which have weaselled their way into Nevermoor: The Trials of Morrigan Crow, her award-winning first novel released in 2017. Wundersmith: The Calling of Morrigan Crow, the second book in this record-breaking series is out now. 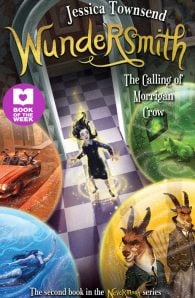 Return to the magical world of Nevermoor! Morrigan Crow's perilous adventures continue in the most anticipated sequel of the year, a treat for all fans of magic and Wunder.Morrigan Crow has been invited to join the prestigious Wundrous Society, a place that promised her friendship, protection and belonging for life. She's hoping for an education full of wunder, imagination and discovery - but all the Society want to teach her is how evil Wundersmiths are. And someone is blackmailing Morrigan's unit, turning her last few loyal friends against her. Has Morrigan escaped from being the cursed child of Wintersea only to become the most hated figure in Nevermoor?Worst of all, people have started to go missing. The fantastical city of Nevermoor, once a place of magic and safety, is now riddled with fear and suspicion... #5 in Better Reading’s Top 50 Kids 2021...A breathtaking, enchanting new series by debut Australian author Jessica Townsend, about a cursed girl who escapes death and finds herself in a magical world - but is then tested beyond her wildest imagination.Winner of the Dymocks and QBD Children's Book of the Year 2018 and a New York Times bestseller, Nevermoor: The Trials of Morrigan Crow is the first in an enchanting series for fantasy fans of all agesMorrigan Crow is cursed. Born on an unlucky day, she is blamed for all local misfortunes, from hailstorms to heart attacks - and, worst of all, the curse means that Morrigan is doomed to die at midnight on Eventide.But as Morrigan awaits her fate, a strange and remarkable man named Jupiter North appears. Chased by black-smoke hounds and shadowy hunters on horseback, he whisks her away into the safety of a secret, magical city called Nevermoor.It's there that Morrigan discovers Jupiter has chosen her to contend for a place in the city's most prestigious organisation: the Wundrous Society. In order to join, she must compete in four difficult and dangerous trials against hundreds of other children, each boasting an extraordinary talent that sets them apart. Except for Morrigan, who doesn't seem to have any special talent at all.To stay in the safety of Nevermoor for good, Morrigan will need to find a way to pass the tests - or she'll have to leave the city to confront her deadly fate. 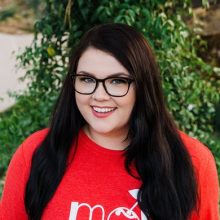 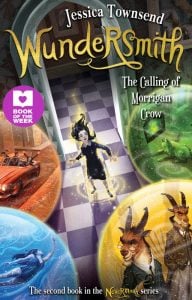 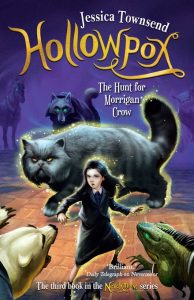 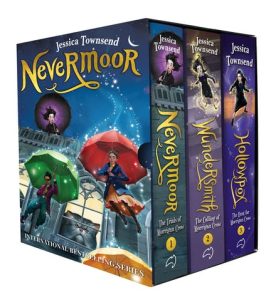