5 Famous Writers Who Were Crazy About Cats There are plenty of cat-lovers here in the Better Reading office, which is why we’ve spent the last week obsessing over The Divine Feline – a charming and beautifully-written gift book about cats and the women who love them, from international bestselling novelist Belinda Alexandra. But Belinda isn’t the only writer to become enamoured with these beguiling creatures. Throughout history, there have been plenty of famous writers who had a special feline or two around them as they penned their bestsellers. Here’s a list of five famous writers who were as crazy about cats as we are.

When the Dickens’ family cat, Williamina, gave birth to kittens, she moved them one by one from the kitchen into a chosen corner of Charles’ study. After several failed attempts to remove the kittens from the study, Dickens gave up when Williamina brought them back. Again and again. According to Dickens’ daughter, Mamie, the kittens would frolic around him as he wrote, “swarming up the curtains, playing about on the writing table and scampering behind the bookshelves”. Eventually homes were found for all of the kittens except for one: A small male cat who quite deaf and known by the servants as ‘the master’s cat’ due to his devotion to Dickens. One evening, when Dickens was reading with his cat beside him, the light of his candle went out. Undeterred, he simply relit the candle and continued with his book. A few minutes later, the candle began to flicker again. He looked up just in time to catch his cat deliberately snuffing it out with his paw! Clearly somebody wanted a head scratch. 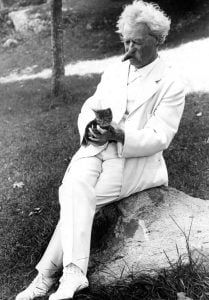 Mark Twain was a great cat lover! In fact, he preferred them to people, writing: “If man could be crossed with a cat, it would improve man, but it would deteriorate the cat”. When his beloved cat, Bambino, went missing, Twain took out an advertisement in the New York American offering a $5 reward for his safe return. Bambino was described in the notice as “Large and intensely black; thick, velvety fur; has a faint fringe of white hair across his chest; not easy to find in ordinary light.” Though Bambino was safely found in the neighbours yard, people continued to bring cats to Twain’s house for days afterwards in the hopes that they’d meet the famous writer.

Emily Bronte adored cats – as did her sisters, Charlotte and Anne. Emily wrote Wuthering Heights with her tabby cat, Tiger, sleeping near her feet. In her essay, ‘The Cat’, Bronte claimed that cats are the closest animals in temperament to human beings, stating: “A cat is an animal who has more human feelings than almost any other being. We cannot sustain a comparison with the dog, it is infinitely too good; but the cat, although it differs in some physical points, is extremely like us in disposition”. You’ve got to admit, she has a point.

Hemingway’s love for cats began in Cuba when a ship’s captain gave him a white, six-toed feline named Snow White. In 1931, when he moved to his home in Key West, Florida, Hemingway took Snow White with him. Today, some 40 to 50 six-toed descendants of Snow White still roam the house, which is now a famous Hemingway museum. The Hemingway House and Museum website states that Hemingway named all of his cats after famous people – a tradition they still honour today! Over the years, the resident cats have been named after a bunch of famous people, from Cary Grant to Marilyn Monroe.

The famous writer of hard-boiled detective fiction was fascinated with his cat, Taki – a feisty black Persian whom he referred to as his secretary. In a letter to a friend, Chandler describes Taki as follows:

“Our cat is growing positively tyrannical. If she finds herself alone anywhere she emits blood curdling yells until somebody comes running. She sleeps on a table in the service porch and now demands to be lifted up and down from it. She gets warm milk about eight o’clock at night and starts yelling for it about 7.30. When she gets it she drinks a little, goes off and sits under a chair, then comes and yells all over again for someone to stand beside her while has another go at the milk. When we have company she looks them over and decides almost instantly if she likes them. If she does she strolls over and plops down on the floor far enough away to make it a chore to pet her. If she doesn’t like them, she sits in the middle of the living room, casts a contemptuous glance around, and proceeds to wash her backside.”