A Murderous Deception: Start reading The Confession by Jo Spain The moment that the murderer turns himself in to the police when he could have easily escaped detection, The Confession announces itself as an exceptional murder mystery, full of the unexpected to the very last page.

From the mystifying confession to the clever jig-saw puzzle of half-truths and red herrings and a superb cast of deeply interesting characters, Jo Spain has written a psychological thriller that is both inventive and utterly addictive.

The truth lies buried somewhere in the past and as the characters settle down to tell their stories, secrets surface. It’s an enthralling read with Spain dissecting her characters with skill and precision. The Celtic Tiger that Ireland was known as during the boom and the corporate greed and villainy that foreshadowed the bust plays a strong role, as does a passionate sense of family and kinship.

The story opens with a brutal murder (warning, described in savage detail), when late one night a young man walks into the luxury mansion of disgraced banker, Harry McNamara and beats him to death and immediately turns the whodunit formula on its head by having the murderer turn himself into police.

The life and times of three characters are examined almost forensically by Spain and its around them that the mystery unfolds: There’s Julie, Harry’s wife who witnesses the attack and is frozen by fear. John Paul Carney (JP), the intruder who hands himself in, confessing to the assault. And the wonderful DS Alice Moody.

Daily, Moody faces a clubby culture of card games, luke-warm tea, bad jokes and casual sexism at the police station. She’s not immune, but she’s resilient. And with her record for cracking tough cases, the tenacious Moody is assigned to find out why the infamous Harry McNamara seems to have been murdered by a perfect stranger for no good reason. And why JP has confessed so readily.

When the spotlight is turned on Harry and Julie’s long marriage, cracks in the relationship covered for the most with a glossy veneer, emerge.

But what possible link could there be with this power couple and JP, whose life story of poverty and under-privilege could come straight from the pages of a Charles Dickens story?

Reading The Confession is like watching a deadly game of cat and mouse, suspenseful and enthralling, except you’re never sure who is the cat and who is the mouse.

Just expect to be consumed by a great story.

Jo Spain made her name with The Inspector Tom Reynolds Series. The Confession is her first to feature DS Alice Moody. Spain is the vice-chair of business body InterTrade Ireland and a parliamentary assistant. She lives in Dublin with her husband and four children. 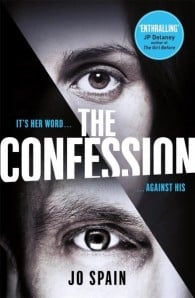 The breathtaking debut psychological thriller from bestselling author Jo Spain.Late one night a man walks into the luxurious home of disgraced banker Harry McNamara and his wife Julie. The man launches an unspeakably brutal attack on Harry as a horror-struck Julie watches, frozen by fear.Just an hour later the attacker, JP Carney, has handed himself in to the police. He confesses to beating Harry to death, but JP claims that the assault was not premeditated and that he didn't know the identity of his victim. With a man as notorious as Harry McNamara, the detectives cannot help wondering, was this really a random act of violence or is it linked to one of Harry's many sins: corruption, greed, betrayal?This gripping psychological thriller will have you questioning, who - of Harry, Julie and JP - is really the guilty one? And is Carney's surrender driven by a guilty conscience or is his confession a calculated move in a deadly game?  About the AuthorJo Spain has worked as a party advisor on the economy in the Irish parliament. Her first novel, With Our Blessing, was one of seven books shortlisted in the Richard and Judy Search for a Bestseller competition and went on to be a top-ten bestseller in Ireland. Joanne lives in Dublin with her husband and their four young children.

Jo Spain has worked as a party advisor on the economy in the Irish parliament. Her first novel, With Our Blessing, was one of seven books shortlisted in the Richard and Judy Search for a Bestseller competition and went on to be a top-ten bestseller in Ireland. Joanne lives in Dublin with her husband and their four young children. 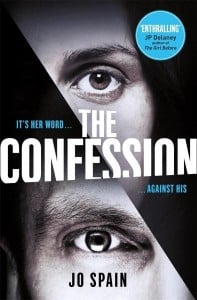