Author Q&A: Adele Dumont on No Man is an Island 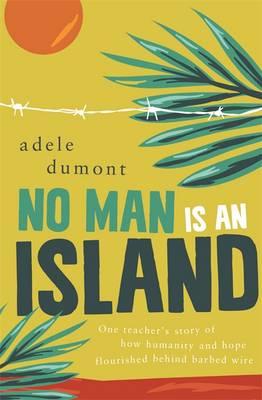 ‘I’ve tried not only to individualise asylum seekers, but to show that their suffering is only one aspect of their identities.’

When 24-year-old Sydneysider Adele Dumont volunteered to teach English to men in immigration detention on Christmas Island, she had no idea that the work would be so rewarding or the people she met so fascinating. So when she was offered a job working at Curtin detention centre, she took it. In No Man is an Island Dumont documents her existence living in a donga in remote Western Australia, the relationships she forms there and her trips back to Sydney to face ‘real life’. No Man is an Island is a deeply personal and intriguing story that puts a human face on the stories of asylum seekers. She spoke to Better Reading about her experiences, how she turned them into a book and why she feels privileged to have taught in detention centres.

Better Reading: In No Man is an Island you successfully put faces and personalities to many of the asylum seekers you taught. This is in contrast to how asylum seekers are sometimes portrayed in the media, as arrivals and a problem to be dealt with. Do you think this portrayal is partly why many fail to sympathise with the plight of asylum seekers – that we don’t always see the human side?

Adele Dumont: For sure. Early on in my book, on one of my first days in the Christmas Island detention centre, it strikes me that the detained asylum seekers are at once ‘watched and unseen’. I think this observation could equally apply to the asylum seeker debate more generally – despite the intense focus on the ‘issue’, there’s a real dearth of personal stories.

In my book I’ve tried not only to individualise asylum seekers, but to show that their suffering is only one aspect of their identities. Much of the book consists of long conversations over tea, where men try to explain things to me, or make each other laugh, or quiz me about Australian culture. I think sometimes we view asylum seekers solely through the lens of their victimhood, and therefore deny ourselves any more complex response than pity.

BR: When you first volunteered to teach English on Christmas Island, did you ever imagine you’d end up writing a book about your experiences?

AD: Definitely not! I flew to Christmas Island as a volunteer English teacher, intending to stay there for four weeks. As strange as it may sound, I quickly became addicted to my life there and so ended up staying a few months extra, and then accepting a contract to work in Curtin (WA). Right from the start I kept a journal, I guess as a way of processing everything that was going on around me. I felt incredibly lucky to have access to such a secret world.

Even after I eventually left Curtin with a good dozen journals filled with material, I wasn’t confident in producing an actual book. I didn’t consider myself an authority on asylum seekers, and I was also wary of speaking on behalf of people who’d been denied a voice. It took me quite a while – as obvious as it may sound now- to realise that the one thing I was an expert on was my own personal experiences and feelings. So I eventually used my own journey through the system as an overarching narrative framework.

BR: In the last few days there have been shocking disclosures coming out of Nauru that have previously been under wraps. Is secrecy part of the problem, and do you hope in reading No Man is an Island some Australians may gain more understanding of life in detention centres?

AD: Yes, secrecy is a huge problem. Apart from hiding abuse and suffering, the media blackout also means that people on the outside are free to paint asylum seekers however they please.

I hope that readers of my book will come away with a better understanding of why life in detention is so deeply detrimental to people’s wellbeing. While instances of abuse are obviously shocking, what I find even more disturbing is the way that indefinite detention insidiously eats away at people.

BR: You formed a strong attachment with many of your students. How difficult was it to maintain a teacher-student distance?

AD: Pretty difficult. In, say, Afghani culture, teachers are considered worthy of the very deepest respect. A lot of my students wouldn’t look me directly in the eye, they’d bow their heads slightly when they saw me, and they’d always address me as ‘my teacher’.

As time went on though, the teacher-student dynamic definitely transformed into friendship. I grew especially close to a small group of Afghan Hazara men, who I used to drink tea with every afternoon after all our classes had finished. Technically, as a Serco employee, I had a duty of care over the clients, but in actual fact mostly they took care of me. They treated me as tenderly and as protectively as I imagined they would a younger sister.

BR: You talk of being lucky about your role in the detention centre – despite your despair sometimes, as a teacher you feel that your role is less difficult than being an officer or psychologist. Do you still feel that is the case?

AD: Yes, right from the start I felt really lucky and privileged to be working as a teacher. Even when the atmosphere in the camp was tense – there might for instance have been a hunger strike or a spate of self harm – my own role within the centre always felt very meaningful. In a way I think the more depressed and anxious people became, the more important my own role felt. The classroom was a very welcoming space where people were temporarily occupied.

That’s not to say my job was easy – it was daunting and exhausting work. But even when I was tired or anxious, still whenever I stepped into the classroom, I felt that I belonged there, and that I was making a difference.

BR: You avoid making simplistic judgements about what is a highly complex issue. Was that a deliberate choice you made when writing No Man is an Island?

AD: I don’t know that I consciously avoided simplistic judgements; I simply tried to convey my own evolving thoughts and feelings as authentically as I could. I guess that means that I do – as a narrator – come across at times as confused, unsure, hypocritical, vague etc. My own experiences definitely contradicted a lot of the stereotypes out there, so again I wanted to reflect this in my book. For instance, I included portraits of Serco officers who were extremely kind with clients, and one passage in my book describes a sleazy and predatory client.

Having said that, another part of me wonders whether maybe we’ve all over-complicated something that at its heart is actually quite simple. Yes Middle Eastern politics are too messy and complex for my own mind to grasp, but is our dilemma here, in Australia, really that complicated? There are people coming here who don’t have a home. They need somewhere safe to live, full stop.

BR: It’s a very open and frank book told from your perspective and you often lay bare how you’re feeling. How difficult was that?

AD: This was an extremely difficult process, as I’m pretty introverted and not used to sharing my feelings with those around me, let alone with random unknown readers. My first draft of the book actually revealed a lot less about the narrator – I assumed that readers would want to know about the asylum seekers and not about me. But when Emily Maguire read my manuscript, her main advice was that I needed to reveal much more of myself, because the narrator is really the reader’s guide through the story.

BR: How hard has it been for you to return to a ‘normal’ life after your time working in detention centres?

AD: Good question. For me the most difficult thing about working in detention centres was the FIFO (fly-in, fly-out) lifestyle. Whenever I returned to Sydney, I felt aimless and dazed, and missed my life in Curtin immensely.

It’s been a few years now since I left Curtin, so I’m pretty settled back into ‘normal life’. Crazy as it may sound, I do miss Curtin. My life had an intensity and a purpose and a depth that I’m not sure it’ll ever have again. That probably sounds really callous – like detention centres are an exciting backdrop to my own adventures. But it’s not the barbed wire or the cameras I miss – it’s the people, and the chance I had to share a part of their lives.

BR: You report being a solitary person and you spend a lot of time writing your journal at Curtin. Do you plan now to pursue a writing life?

AD: When I was thinking of leaving Curtin, I fantasised about the bohemian writing life I’d have when I returned to Sydney. Needless to say I was pretty shocked by the reality of writing. I’ve just finished reading SaveOzStories and I love Magda Szubanski’s description of the writing process: she says that people ‘don’t realise the sheer slog of writing… the years of grinding psychological, even physical labour… we are like children who want to believe in magic’. I definitely find writing painful, but I think I find not writing more painful still. If I hadn’t been able to record and share my experiences working in Curtin, I would have felt that I’d wasted something precious and irretrievable.

Adele Dumont was born in France and moved to Australia before her first birthday. After studying Australian Literature at the University of Sydney, she spent two years teaching English at the Curtin immigration detention centre. This book is based on her own experiences, as recorded in her personal journals. Adele lives in Sydney’s inner west. 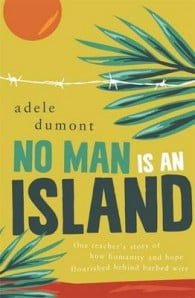 In 2010, 24-year-old Sydneysider Adele Dumont volunteered to teach English to men in immigration detention on Christmas Island. She didn't expect to find the work so rewarding or the people she met so interesting. So when she was offered a job working at Curtin detention centre near Derby in Western Australia, she took it.

Working at Curtin required a fly-in fly-out lifestyle. Adele lived in a donga in WA, her life full of bus trips to the detention centre; back home in Sydney, she was overwhelmed by the choices and privileges people had. What kept her returning to Curtin were her students: men from many lands who had sacrificed all they knew for a chance to live in Australia; men who were unfailingly polite to her in a situation that was barbarous. Men who were looking for an opportunity for a better life.It makes the issue of immigration detention accessible to far more interested Australians than newspaper articles. It is a vividly told story full of characters and humanity.

Adele Dumont was born in France and moved to Australia before her first birthday. After studying Australian Literature at the University of Sydney, she spent two years teaching English at the Curtin immigration detention centre. This book is based on her own experiences, as recorded in her personal journals. Adele lives in Sydney's inner west. 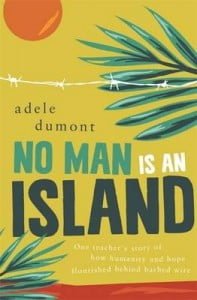 No Man is an Island