Cath Ferla’s debut novel, Ghost Girls, is the original story of English language teacher turned private detective, Sophie Sandilands, who becomes immersed in the seedy underbelly of Sydney’s Chinatown. Ferla is an exciting new voice in Australian crime fiction with this page-turning story of foreign students going missing, switching identities and being forgotten about in an alien country. As Sophie is drawn deeper into this sinister mystery, she gets herself into grave danger and the novel draws to a dramatic, nail-biting conclusion. We talked to author Cath Ferla about how she researches, her attraction to Chinese culture (especially the food) and getting carried away by the plot…

BR: Congratulations on your wonderful debut novel Ghost Girls. What inspired you to pen this book with an unusual backdrop – the English language schools of Sydney’s Chinatown?

CF: I am a writer and, like most writers, I also have another profession – teaching. I am a qualified secondary school teacher but my primary interest and experience is in teaching English as an Acquired Language (EAL). I’ve taught English in Beijing, Sydney and Melbourne. During a stint at a language college in Sydney, I became aware that one of my students was not who she purported to be. She was a ‘fraud’, sitting in on another student’s classes so that student could maintain her visa credits. I never found out where the other student was but my story mind ticked over… and that was the kernel for Ghost Girls.

BR: There are some sad stories of missing Asian students, including exploitation, forced prostitution and pornography. Did any of this subject matter come from real stories?

CF: Yes, the story kernel came from a real experience. But I also wanted to explore the world of international students – those people are a huge part of our modern cities and yet they remain largely on the outside because of language and cultural issues. These people from around the world have added dynamism to our cities but I don’t feel that we, as Australians, appreciate this enough. I told a dark story, because I am a story maker and crime was my genre. But I also tried to tell a light story – one that celebrates the different influences and cultures and cuisines brought to Australians by others from around the world.

BR: Could you tell us a little about your research for this novel?

CF: In terms of research: 1) my own experience as a language teacher in Australian English language institutions 2) my experience of being an ‘other’ during my time in Beijing, 3) intermittent but ongoing newspaper articles highlighting the sexual exploitation of people recently arrived to Australia. The rest came from my imagination.

BR: The novel made us very hungry, focusing as it does on Chinese food and managing to intensely evoke the sounds and smells of Chinatown. Is this something you’re passionate about?

I am passionate about food on multiple levels. In China I was flooded with new tastes, textures, ideas about food. I realised I loved food and I embraced everything from dog to live prawns and then, on the vegan end, stinky tofu! I took it all in, recognised that food is such an important aspect to culture. I feel Chinese people’s connection to food reflects their connection to each other – even the most basic experience, feeding yourself, is a cause for celebration in that culture. Eating is an experience – it is not mindless. I wanted to represent that element of Chinese culture in my book. I also used food to soften the dark edges of my story. I used it to give the reader a break. Food is soothing. It became a mechanism for me. I feel I used food as a mechanism to gently sooth the readers of Ghost Girls.

BR: It’s also evident that you have a great knowledge of China and Chinese culture. Can you tell us something about that?

CF: I lived in China in 2000 and 2001. We are talking more than a decade ago. However, that experience imprinted itself on me. I was 23, 24, 25. I fell in love with that ragged land, its people, history, diversity, language, cuisine… I just dissolved into it. I am still so strongly connected. My best friend is a woman I met in China 15 years ago, plus I have re-visited the country, studied Mandarin in Australia and now my daughter goes to an English-Mandarin bilingual school. I cook Sichuan food often, my kids know how much mama needs her chilli. China is in my blood, basically.

BF: As the heroine Sophie Sandilands investigates the sinister events at her language school, we’re drawn through a nail-biting, sometimes frightening, narrative. Did you plan this plot in advance or did it develop as you wrote?

The kernel was the idea that one visa-tied person might help another via ‘sitting in’ on her classes. I then thought about what the ‘other person’ might be doing. I was looking for a crime narrative and newspaper articles helped me to make the choice – sexual services. The rest of the story unfolded for me as I wrote it. I know this sounds strange but there is a revelation late in the book that a photo is actually not a photo at all…. this was such a surprise to me, when I realised it. When you write, you get lost in your characters and your story and, if both stories and characters are strong enough, you find yourself at a point where it is the characters dictating to you and not the other way round. it sounds strange, I know. in psychology terms I guess you call this the subconscious. as a writer, this is the gold.

CF: What authors are you currently reading? And which authors have inspired you?

Helen Garner is and will always be my inspiration for her words, stories, craft and strength.

To purchase a copy of Ghost Girls or find our more click here. 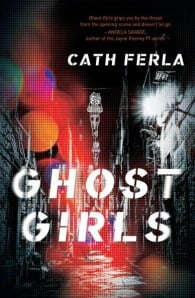 Winter in Sydney. The city is brimming with foreign students. Sophie Sandilands takes a job teaching at an English language school. When one of her students leaps to her death it becomes clear that lurking within the psyche of this community is a deep sense of despair and alienation. When it is revealed that the dead woman on the pavement has stolen another’s identity, Sophie is drawn into the mystery.Unable to resist the investigative instincts that run in her blood, Sophie finds herself unravelling a sinister operation that is trawling the foreign student market for its victims. But as Sophie works on tracking down the criminals it becomes evident that someone has knowledge of her and the disappearances in her own past. Will Sophie solve the mystery before she too becomes a ghost?Ghost Girls richly evokes the sights, smells, tastes and sounds of Sydney’s Chinatown, and imagines dark exploitative demands behind closed suburban doors. 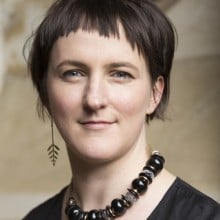 Cath Ferla is a multi­platform writer with a background in screenwriting and script editing, print and online journalism, educational publishing and long and short form fiction. She is also a Secondary School­qualified teacher, with teaching experience and qualifications in the area of EAL (English as an Acquired Language). She has also lived in Beijing, China and studied Mandarin Chinese. 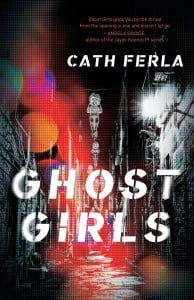