What inspired the idea behind Miss Graham’s Cold War Cookbook?

The book began when I discovered an old cookery book among my mother’s effects. I could just about read the faded lettering on the stained cover: The Radiation Cookbook. It had been given away free with Radiation gas cookers. This one dated back to before the Second World War. I opened it carefully. The back was gone; it was held together with parcel tape. Inside was trove of clippings from old newspapers and magazines and handwritten recipes. I recognised my mother’s writing, and my aunt’s and what I took to be my grandmother’s. To my knowledge there were no existent letters between these women, so these recipes were the only connection between them. I knew there was something I wanted to write about here, but I didn’t know what. Years later, I was in the Imperial War Museum in London with my daughter. We were in the Gallery devoted to espionage. One of the wall panels said that after the Second World War, the British Zone in Germany had been a hotbed of spying. My aunt had been there then, working as an Education Officer. One of us said, ‘Perhaps Aunty Nancy was a spy…’. We both laughed. My Head Mistress maiden aunt a spy? The idea was absurd. But maybe not… I suddenly saw how I could use the Radiation Cookbook and Miss Graham was born.

I began with family history. Everyone who remembered anything about her time in Germany had gone and I really wished I’d asked my aunt more about her life, asked my mother when she was alive, but I knew enough to get started. I knew where my aunt been stationed, I had her passports and some photographs of ruined cities, sunken ships and refugee children. This gave me pointers for the background research. I also knew about my aunt’s relationship with a young German before the war and that she’d been very close to her second cousin and that family lore had it that he’d been involved in something ‘hush, hush’ during the war. This gave the skeleton of a story. I had my ‘spy’ idea, with the Radiation Cookbook as a device for exchanging messages, but the who, the what and the why had to be provided by what was happening in Germany in 1946. When I’m researching any historical novel, I go to general histories first, then hone in on more specific areas. I also try to find eyewitness accounts, testimonies, letters, diaries, journals and memoirs to provide authentic detail. Since food was an important element in the book, I had to find out what people were eating! Time to hit the library, visit the Imperial War Museum again (this time to use their archive) and trawl the Internet. When I know enough and know where to go to find out more, I start writing. I then research as I go along to find out specific things.  While I’m researching and writing, I keep scrapbook of photos, postcards, photocopies, printouts, recording the progress of the book.

Depends when you were looking! If I’m writing, there will be sites related to whatever I need to know, could be names, buildings, places, Google maps, Google Earth, photo archives and images, food, recipes, makeup, clothes, shops of the period. When I’m NOT writing, then we’d be looking at: Amazon, YouTube Yoga lessons, meditations, recipes, travel booking sites, Instagram, Facebook, Twitter – and that’s just yesterday!

A better understanding of Germany in that immediate post war period and the lives of those living through it. If they didn’t know it already, I’d hope they would have learnt something about how cynical, manipulative and amoral governments can be and that there are people of principle, who are prepared to do what’s right in face of that, however hard that might be. I would also hope that they take some of the characters with them and think more deeply, perhaps, about the role that food takes in our lives.

For previously published authors, does the creative process get easier for you with each book?

Um, no. Each book is a different challenge, and none are easy.

Amazing! It doesn’t matter how many books you’ve written, it is always a very special moment when you hold the finished book in you hands. Knowing the whole process, all the work that has gone into it, not just your work but everyone else involved and there it is!

What was the most challenging part of writing Miss Graham’s Cold War Cookbook?

The research. It’s always a challenge to balance what you’ve found out with what the reader needs to know and then fitting the information unobtrusively into the story. It was also a challenge to make the recipes work as a code (I’m rubbish at codes) and the spying part. Spy novels are a whole world of their own!

It was always called The Cold War Cookbook. Sometimes, titles just come and they are perfect. Cold War and Cookbook are a strange juxtaposition, they shouldn’t go together but they sum up the book neatly and that’s what you need a title to do.  Miss Graham was added later because it made the book more personal – one woman’s story.

I guess my major influence is the thing that got me into writing in the first place. I was an English teacher and concerned that my students weren’t reading. The books they enjoyed were American thrillers by writers like Robert Cormier and Lois Duncan. These novels read like adult books, dealt with serious themes and had teenagers at the centre of the story, but they were thin on the ground. My students wanted to know why there weren’t more books like this, specifically by British authors about teens like them. I wondered the same thing, so I set out to write one which became my first novel. I went on to write YA after that. Miss Graham’s Cold War Cookbook is my first novel for adults. I still want to write exciting, engaging stories that cover serious topics and explore serious themes.

What are the easiest and most difficult parts of your job as a writer?

The easiest thing is having the idea. The hardest thing is realising that idea. That is the testing part. To do that, you have to keep your belief in the idea. If it’s good, it will come good. If not, you have to be prepared to rip it all up and start again. You have to believe in what you are doing, the story you’re telling and your ability to tell it how you want it, no matter the setbacks or other people’s opinion. You have to keep your focus, do whatever it takes to realise the finished book and your ultimate goal. 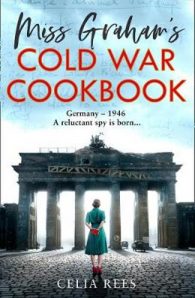 A striking historical novel about an ordinary young British woman sent to uncover a network of spies and war criminals in post-war Germany that will appeal to fans of The Huntress and Transcription.World War II has just ended, and Britain has established the Control Commission for Germany, which oversees their zone of occupation. The Control Commission hires British civilians to work in Germany, rebuild the shattered nation and prosecute war crimes. Somewhat aimless, bored with her job as a provincial schoolteacher, and unwilling to live with her stuffy genteel parents any longer, twentysomething Edith Graham applies for a job with the Commission-but is instead recruited by the OSS. To them, Edith is perfect spy materialsingle, ordinary-looking, with a college degree in German. And there's another thing-the OSS knows that Edith's brother went to Oxford with one of their most hunted war criminals, Count Kurt von Stabenow, who Edith remembers all too well from before the war.Intrigued by the challenge, Edith heads to Germany armed with a convincing cover story: she's an unassuming schoolteacher sent to help resurrect German primary schools. To send information back to her OSS handlers in London, Edith has crafted the perfect alter ego, cookbook author Stella Snelling, who writes a popular magazine cookery column that embeds crucial intelligence within the recipes she collects. But occupied Germany is awash with other spies, collaborators, and opportunists, and as she's pulled into their world, Edith soon discovers that no one is what they seem to be. The closer she gets to uncovering von Stabenow's whereabouts-and the network of German civilians who still support him-the greater the danger.With a unique, compelling premise, Miss Graham's Cold War Cookbook is a beautifully crafted and gripping novel about daring, betrayal, and female friendship. 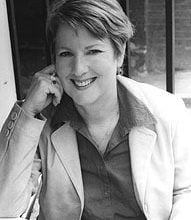 Celia Rees is an award-winning YA novelist who is one of Britain's foremost writers for teenagers.  Her novel Witch Child has been published in 28 languages and is required reading in secondary schools in the UK.  Rees’s books are published in the US by Candlewick and Scholastic. Miss Graham's Cold War Cookbook is her first adult novel. A native of the West Midlands of England, she lives with her family in Leamington Spa. 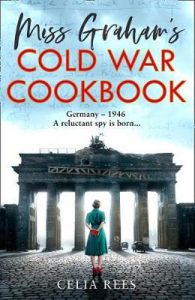