What do you when you’re told you’ve got terminal cancer at 50? Take up crochet and knit your own coffin, convert to religion and bow out gracefully? ….Or ditch your husband of twenty years, abandon your demanding teens, quit your job, desert your bossy, octogenarian mother, cash in your life savings and take your two sisters on a luxury cruise? Courageous or ruthlessly selfish? Answers on a postcard please… preferably from the Caribbean.

The three Ryan girls are dissatisfied. Emerald’s husband won’t pay her any attention in the bedroom, Amber’s husband won’t pay her any attention out of it. And Ruby’s handyman hubby is paying attention to every woman on the Insular Peninsular because well, the ladies love the tradies. Maybe what these three frazzled sisters need is a little “HRT – Husband Replacement Therapy”? This is a book about women ageing disgracefully, having fun, being frivolous and putting themselves first for a change. Laughter’s not just the best medicine, it’s the only medicine we have right now.  So, slip between these covers. Satisfaction… and giggles guaranteed.

I only write because it’s cheaper than therapy! For women life is in two acts – the trick is surviving the interval. Menopause, that horrible hormonal intermission, is discombobulating and demoralizing. Lack of sleep made me feel so at sea I needed a distress flare. It was also fiendishly hot. Cripes. I was having my own weather! I sweated so much I thought Gestapo were trying to get a confession out of me. It was like being a moody teenager again, only this time with wrinkles instead of pimples.

Also, with the corona crisis, could there be a better time to bring out a book about husband-ectomies? After six weeks of lockdown, every woman I know wants to administer a large dose of “HRT – Husband Replacement Therapy”. In post corona China, divorce statistics have soared, with 74% of proceedings initiated by exhausted wives, citing lack of help around the house during Lockdown as the main reason. And where Wuhun goes, the world does tend to follow.

It seems a woman’s work is never done… Not by men any way. Suddenly deprived of their cleaners, women quickly realised that their spouses were not pulling their weight on the shopping, mopping, cooking and cleaning front. (Not all men, obviously. I wanted to get that in before beardy blokes start pelting me with their homemade quinoa quiches.) But generally speaking, it’s true that the enlistment of labour on a subsistence basis is now forbidden except in one state – the holy state of matrimony. Although clearly it’s in a man’s best interest to help more around the house as it’s scientifically proven that no woman ever shot her husband while he was vacuuming.

But I also wanted to write a book which celebrates the sisterhood. My motto in life? That women are each other’s human wonder bras – uplifting, supportive and making each other look bigger and better.

I do all my research in a scientific, in depth fashion – over cocktails with girlfriends. And what I discovered is that women want to carpe the hell out of diem. Adventure before dementia, that’s our motto. I thought at this age I’d feel like the human version of an orthopaedic shoe – comfy, well worn, unremarkable. But I don’t. I feel like swinging off a chandelier with a toy boy between my teeth. And yet, society tends to cast older women out into Social Siberia.  For example, 85% of people on TV over 50 are men. You never hear older men dismissed as “mutton dressed as ram” now do you?

If I have any gift at all, it’s writing down the way women talk when there’s no men around. And also putting into words what women are thinking but not necessarily saying out loud. And what they’re thinking is… I want to have my beefcake and eat him too! Oh, and equal pay would be quite nice also.

To have some fun and not feel guilty about it. As Mums, our guilt glands are constantly throbbing. Mothers always put ourselves last. We take the burnt chop, but never the window seat on a plane, for example.

But once the kids fly the nest we can finally cut that psychological umbilical cord that’s kept us tied to the family hearth. I just can’t stop thinking about all the wonders of the world I’ve never glimpsed – The Great Wildebeest migration in Kenya. The Rio de Janeiro Carnival. The Taj Mahal. The Aurora Borealis…Chris Hemsworth naked…

I want to say to women, you are not a runner-up in the human race. Just remember that there’s nothing dull or boring about women my age –  Madonna, Kate Bush, Jennifer Saunders, Sharon Stone, Jamie Lee Curtis, Michelle Pfeiffer, Sandi Toksvig – all females in their prime. So, rejoice and embrace you second act. I mean, getting older sure beats the alternative, right?

To women who are thinking about giving everything up and just going on a permanent holiday – what would you say to them?

My advice to women my age? When the window of opportunity opens… leap through it. And if opportunity doesn’t knock – get a doorbell. Forget all thoughts of a “chequered past.” What you need now is a “chequered present.” So, I’ll see you on top of Everest. Or on a scuba in Cuba. Or maybe in the burly arms of a hot-to-trot tango Love-God in Brazil. Forget “Eat, Pray, Love”. What about “Drink, Dance, Shag?” Here’s to being footloose and spanx-free.

A writers first novel is usually largely autobiographical – but after that, we make a living out of lying. And yet, even though my characters are invented, as long as their struggles and survival strategies ring true, they resonate with readers.

All my novels, from Puberty Blues on, champion women because it’s still a man’s world. 100 years since Emily Pankhurst tied herself to the railings, and we still don’t have equal pay; plus, we’re getting concussion hitting our heads on the glass ceiling – and we’re expected to clean it whilst up there. Any woman who says a post-feminist, has kept her wonder bra and burnt her brains because we still have a long way to go. But we don’t whinge about it, do we girls? Laugh and the world laughs with you – cry you and you get salt in your champers, which we definitely don’t want!

So here’s cheers. I hope you enjoy HRT and that it gives you a few extra laughter lines.

Much love to you all, Kathy. xx 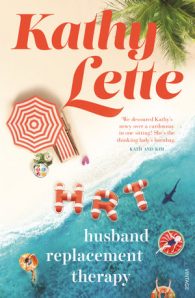 What do you do when you’re told you’ve got terminal cancer at 50? Take up crochet, get religion and bow out gracefully? Or upend your life and spend every remaining minute exploring new pleasures?Ruby has always been the generous mediator among her friends, family and colleagues, which is why they have all turned up to celebrate her 50th birthday. But after a few too many glasses of champers, Ruby’s speech doesn’t exactly go to plan. Instead of delivering the witty and warm words her guests are expecting, Ruby takes her moment in the spotlight to reveal what she really thinks of every one of them. She also accuses her husband, Harry, of having an affair.Saving the best till last, Ruby lambasts her octogenarian mother for a lifetime of playing her three daughters against each other. It’s blisteringly brutal. As the stunned gathering gawks at Ruby, the birthday girl concludes her bravura monologue with the throwaway comment that she has terminal cancer. She has cashed in her life savings and plans on taking her two sisters cruising into the sunset for a dose of Husband Replacement Therapy. Courageous? Or ruthlessly selfish?But, do they even want to go with her now that she's cast herself off into social Siberia? 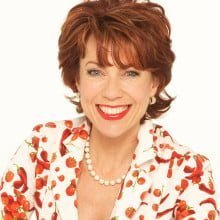 Kathy Lette is a celebrated and outspoken comic writer who has an inimitable take on serious current issues. She is one of the pioneering voices of contemporary feminism, paving the way for Caitlin Moran and Lena Dunham.She first achieved succès de scandale as a teenager with the novel Puberty Blues, which was made into a major film and a TV mini-series. After several years as a newspaper columnist and TV sitcom writer in America and Australia, she's written 11 international bestsellers in her characteristic witty voice, including Mad Cows, How to Kill Your Husband - and Other Handy Household Hints (staged by the Victorian opera) and The Boy Who Fell To Earth. She is known for her regular appearances on BBC and Sky news programmes. She is an ambassador for Women and Children First, Plan International, the White Ribbon Alliance and the NAS.Kathy Lette lives in London with her husband and two children, and can often be found at The Savoy drinking a cocktail named after her. Kathy is an autodidact (a word she taught herself) but in 2010, received an honorary doctorate from Southampton Solent University. 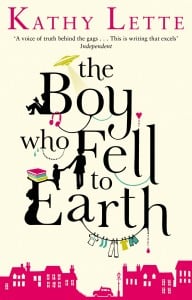 The Boy Who Fell to Earth 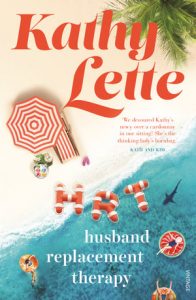