Greenwood is a multi-layered story of one family and their enduring connection to the place that brought them together. Can you tell us a bit more about the book?

Greenwood is a family epic that spans over 120 years, and centres on one Canadian family’s relationship with trees. There are environmental activists, timber tycoons, tree scientists, and reclaimed wood carpenters in the Greenwood family, and the narrative itself is structured like the rings of a tree and is told in nested narrative rings. The story is about betrayal, greed, charity, love, hope, environmental degradation, and most of all, it attempts to question the idea of family lineage as being a simple thing.

This book’s somewhat unique narrative structure came to me after I had cut down a small tree on my property and looked at the rings of growth in the stump. I realized then that a tree tells its own story with its rings, layer by layer, and that I could use that idea to give shape to the novel I had just begun to write. It turned out to be a pretty good way to tell a story.

There are five different time periods presented in this novel, so that means I engaged in five different sets of research. I read many books and firsthand accounts of things like the Great Depression in Canada, the nascent environmental movement on the West Coast of North America, tree biology, subsistence woodcutting in rural Ontario, and wheat farming. There is a carpenter character in this novel as well, and during the writing of this book I built a small house on the forested island where I live. So I suppose you could call that a kind of research?

The big collection of books in my childhood home. I grew up in a small working-class city in a remote part of Canada, but my parents were unique in that they were avid readers. And though things were difficult, I was lucky to be able to escape into that bookshelf, and always find fresh marvels and delights as I grew.

My daily writing routine consists of dropping off my sons at school then returning home to my little writing cabin, which is thankfully beyond the reach of my wifi, then sitting in my chair for five hours or so, broken up by tea breaks and occasional walks in the woods. Anything that happens or doesn’t happen while I’m sitting there is completely dependent on forces beyond me. I’ve learned not to be too stressed about things like daily word count, as long as I’m sitting there. I’m currently working on a new project that I’m not yet sure is viable, so I’m not at the liberty to discuss it, given the prospect of complete embarrassment if (or when!) the idea reveals itself to be fatally flawed. Fingers crossed. A Book that Lingers Long After the Last Page: Read an Extract From Michael Christie's Greenwood 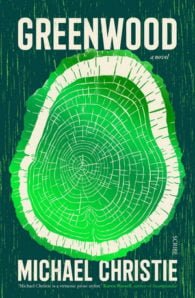 The truth is that all family lines, from the highest to the lowest, originate somewhere, on some particular day. Even the grandest trees must've once been seeds spun helpless on the wind, and then just meek saplings nosing up from the soil.'2038. On a remote island off the Pacific coast of British Columbia stands the Greenwood Arboreal Cathedral, one of the world's last forests. Wealthy tourists flock from all corners of the dust-choked globe to see the spectacle and remember what once was. But even as they breathe in the fresh air and pose for photographs amidst the greenery, guide Jake knows that the forest is dying, though her bosses won't admit it.1908. Two passenger locomotives meet head-on. The only survivors are two young boys, who take refuge in a trapper's cabin in a forest on the edge of town. In twenty-six years, one of them, now a recluse, will find an abandoned baby - another child of Greenwood - setting off a series of events that will change the course of his life, and the lives of those around him.Structured like the rings of a tree, this remarkable novel moves from the future to the present to the past, and back again, to tell the story of one family and their enduring connection to the place that brought them together.

Michael Christie is the author of the novel If I Fall, If I Die, which was longlisted for the Scotiabank Giller Prize, the Kirkus Prize, was selected as a New York Times Editors' Choice, and was on numerous best of 2015 lists. His linked collection of stories, The Beggar's Garden, was longlisted for the Scotiabank Giller Prize, shortlisted for the Writers' Trust Fiction Prize, and won the Vancouver Book Award. His essays and book reviews have appeared in The New York Times, The Washington Post, and The Globe and Mail. A former carpenter and homeless shelter worker, he divides his time between Victoria, British Columbia, and Galiano Island, where he lives with his wife and two sons in a timber frame house that he built himself. 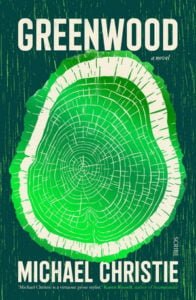