Deep State is described as an edge of your seat thriller. Can you tell us a bit more about the book?

When 25-year-old West Wing intern and ex-Army grunt, Hayley Chill, discovers the body of the White House chief of staff on his kitchen floor, a single clue suggests her boss has died from something other than natural causes. At increasing personal peril, Hayley begins to uncover shocking evidence of a wide-ranging conspiracy. Ultimately, it is the president’s life Hayley must single-handedly defend as the story hurtles toward its astonishing climax.

Deep State celebrates the near-mythic power of The One, placing its hero in a rarefied pantheon. Whether it’s a lone protestor standing defiantly before a convoy of tanks in Tiananmen Square, single mum Erin Brockovich taking on Pacific Gas & Electric, or David’s dust-up with Goliath, a lowly intern’s brave struggle to push back against a vast conspiracy resonates with our need for the unlikely hero. Stories like these make us feel like no foe is invincible.

I loved the movie Winter’s Bone and its central character, Ree Dolly, played by a very young Jennifer Lawrence. Ree is a 17-year-old woman with a sick mum and two younger siblings whose errant father has skipped bail. Problem is, Dad put the family’s West Virginia homestead up as collateral. If Ree can’t find her pop, the family is out on the street. She’s gritty, determined, resourceful and tough as nails.

At one point in the story, Ree Dolly considers enlisting in the US army; the family is desperate for the forty thousand dollars signing bonus. I wondered what would become of this fascinating, compelling character if she did join the army. What happens next? That’s where Deep State came from. Just asking myself a simple question like that.

Unsurprisingly, movies have influenced me an awful lot. For the last four decades, I’ve probably watched three or four movies a week. I’ve always been a steady reader as well, though for much of my screenwriting career I was reading non-fiction.

My biggest fiction writer influence is Elmore Leonard. I don’t think it’s a coincidence that so many of his excellent novels have been adapted for film and television. His characters, worlds and stories are very much in my wheelhouse.

Before I started writing for the film studios, I lived in New York and pursued a playwriting career. I was heavily influenced by the playwright Sam Shepard. In college, I wrote poetry that was quite obviously influenced by Charles Bukowski. What these literary influences have in common I’m not quite sure, except they somehow ended up creating the writer I am today.

I have an office at home, where you’ll find me between 8:30 am and 6:00 pm. With the imminent release of my first book, I’m working seven days a week.

My years as a screenwriter instilled a habit of careful outlining before starting an actual first draft. Writing that first draft is my absolute favorite part of the process. If I have a general idea of what happens next, I can relax and explore the unknown interiors of scenes and sequences, making cool discoveries along the way.

Currently, I’m finishing an edit of a follow-up to Deep State. The next book picks up about a year after the first novel leaves off. Story threads from the first book are followed and new ones are created. I love how this new book is turning out!

Deep State is your debut novel, coming from a screenwriting background. How did being a screenwriter help while you crafted this book?

One of Hollywood’s dirty little secrets is that people in the film and television business positively hate to read. No one really wants to read your screenplay, that’s why one of the lowest paid, bottom-rung jobs in the business is reading scripts! With that awareness in mind, very early on in my career I was determined to write in a way that made it easiest for people to read my scripts. Writing in a dynamic, clean and impactful way helped lower the barriers that face every screenwriter in Hollywood. That writing agenda applied across the spectrum of the endeavor, whether in terms of prose style, characterisation or narrative.

Keeping a reader engaged was a do-or-die proposition. I think those years definitely influence the way I write my novels. My goal is that you have to read me! A Rollercoaster Ride: Take a Sneak Peek at Deep State by Chris Hauty 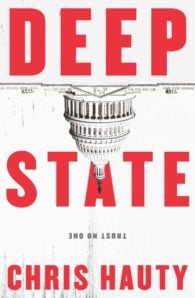 Recently elected president Richard Monroe – populist, controversial and divisive – is at the centre of an increasingly polarised Washington, DC. Never has the partisan drama been so tense or the paranoia so rampant. In the midst of contentious political turf wars, the White House chief of staff is found dead in his house. A tenacious intern discovers a single clue that suggests he died from something other than natural causes, and it seems there may be a deep conspiracy running beneath the surface of everyday events: powerful government figures are scheming to undermine the rule of law – and democracy itself. Soon, allies are exposed as enemies, once-dependable authorities fall under suspicion, and it seems no one is who they say they are.The unthinkable is happening. The Deep State is real.Who will die to keep its secrets? Who will kill to uncover the truth?‘A propulsive, page-turning, compelling, fragmentation grenade of a debut thriller’ C.J. Box, author of Wolf Pack‘A modern-day whodunnit set in the political morass that is current Washington, DC. Riveting and engrossing with an atypical protagonist, it keeps you guessing until the final pages are turned. Chris Hauty has just placed a marker in the world of political thrillers’ Matthew Betley, author of Overwatch 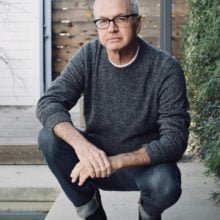 Chris Hauty is a screenwriter who has worked at all the major movie studios, in nearly every genre of film. He currently lives in Venice, California, in the company of a classic Triumph motorcycle and a feral cat. Deep State is his first novel.