Man in Armour is written from the perspective of Charles. A successful London banker – he is extremely well paid to do a job he has a natural talent for, is married to a pretty doctor, has three healthy children, and travels the world for work and pleasure.

Over 48 tortuous hours, Charles is put under pressure. By his boss. By his brother. By his friends. By the government. By his mother. By his protegee. Will he break?

I have always loved to read. I belong to two book clubs and have always read about a book a week.

I also love to write. But until a decade ago I really only did character studies in snatched moments between working and mothering. I certainly didn’t have the confidence to attempt a novel. But I had a breakthrough when I read an interview in 2010 with Hillary Mantel after she published Wolf Hall. In it, she described the five years of detailed research she undertook to create the Tudor world in which Wolf Hall is set.

This came as a moment of stunning insight for me – as a writer, I should recast my professional life as research! In that moment I decided to write a full-length novel set in the business world.

I set myself the challenge of telling a story through the eyes of Charles, a person who at first impression isn’t particularly endearing. But who readers get to know better through the difficulties that beset him through the novel.

I enjoy reading books that allow me to walk a mile in someone else’s shoes. Experiencing the world through the prism of someone else’s values, someone else’s capabilities, someone else’s choices is something I seek. I like to be confronted with the universal human emotions of fear, despair, love, and longing and to be brought by a skilful author to feel empathy. For me, reading is a constant reminder that people are people.

Readers may not be familiar with the business world, but I suspect they will be familiar with Charles’s character traits of ambition and self-destruction. These same character traits are observable in elite athletes, senior politicians, successful academics, Michelin-starred chefs, and pop stars. As a society, we often benefit from the drive and self-belief of these modern-day heroes, but their behaviours come with a price, for them and for us. I hope my book allows readers to reflect on that price.

This book has taken a decade to write, partly because I lacked the time to progress more swiftly.

I used to carry a copy of The Economist magazine with me everywhere to help manage my impatience, for example, I would whip it out while waiting in long Customers & Immigration queues. But once I started writing Man in Armour it supplanted The Economist, I always had a chapter with me, in my handbag, to work on in any spare moments. It got to the point where I would be thrilled if my late-night flights were delayed because it meant I could find a quiet spot in the airport and become absorbed in writing.

However, I struggled to find consecutive days during which to write, which is why not skiing became my secret joy. For years my family and friends have nagged me to learn to ski, but I wouldn’t. Not only because I am too old and too uncoordinated, but also because skiing holidays meant I could stay back at the chalet and work on Man in Armour.

Most people don’t see Charles, they see a man in armour. They see Charles’s carefully cultivated veneer of charm, intellect, sang froid and steely determination. But inside Charles’s armour is a person. A damaged person. Who carefully, methodically created that suit of armour. To protect himself.

The novel explores whether armour is useful, even necessary, in business life. And if it is, what price it extracts from the wearer. How Much is Enough? Read an Extract from Siobhan McKenna's New Novel, Man in Armour Business, Secrets and Power: Read our Review for Man in Armour by Siobhan McKenna 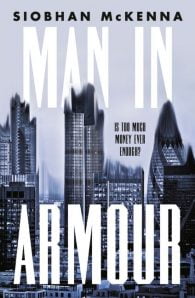 How much money is enough? How powerful do you want to be? And what price will it extract from you? An intriguing, powerful and hard-hitting novel set in the world of big money and big deals, written by a leading business insider. Charles lives in the testosterone-driven, high-powered, brutal world of investment banking. It is a world dominated by deals, bonuses, bravado and savagery. Charles is a master of this world. Each day he shrugs on a metaphorical suit of armour and goes out into a dog-eat-dog world to accumulate power and make money. He's a man who is familiar with casual brutality - his childhood saw to that.But there is a price to pay. Now, at the peak of his career, his armour is rusted and bloodstained and no longer protecting him the way it once did. He finds himself empty. Always cold. No friends. A family that is falling apart.Over the course of two days, everything in Charles' life comes into question. His carefully constructed world is starting to splinter - and he's splintering too.Shocking and at times immensely moving, Man in Armour is a compelling story of a man at the end of his tether, written with a sharp-eyed, incisive focus that also carries real emotional - and moral - resonance. Written by an ultimate business insider - a woman who knows intimately and at first hand this world of power, money and deal-making - this novel carries an undeniable authenticity and force.

Siobhan McKenna is chairman or director of several companies including Foxtel, Nova Entertainment, Woolworths and Illyria. During her career she has worked in telecommunications, oil and gas, healthcare and government. She was a commissioner of the Australian Productivity Commission, a chairman of NBNCo and a partner of McKinsey & Company. She lives in Melbourne with her husband and three teenage sons. Man in Armour is her first novel. 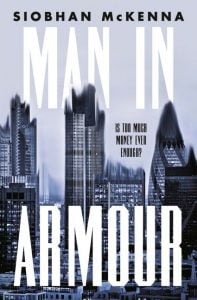