Jacqueline Harvey and Kate Isobel Scott have teamed up after nearly 30 years to create their first picture book together.

Nearly 30 years ago, Kate Scott was a young girl who was enchanted by the stories written and read by her school teacher, Jacqueline Harvey.

When Kate was just six-years-old, Jacqueline told the girl that she would one day illustrate one of her teacher’s books.

Kate made such an impression on Jacqueline that she even went on to be one of the three girls who inspired the author’s much-loved character Alice-Miranda.

Fast forward to 2021. Jacqueline, now a bestselling children’s author, has remained true to her word and teamed up with Kate, who is now a successful claymation artist and illustrator. In March they will release their first book together – That Cat.

Here, they talk about their collaboration process and the enjoyment they shared creating their first picture book.

Jacqueline – That Cat is an irreverent rhyming book about cats. It was inspired by my cat, Bally Puss, who came into our life as a visitor cat and is now a permanent fixture. Cats have really interesting and varied personalities – they get up to all sorts of things – so I personified the cats in silly ways. At the end, the cat we love the most is always that cat – the one who sits on your lap or at the end of the bed, and that’s how the book came to life.

I was Kate’s kindergarten and fourth-grade teacher and I’ve known her since she was about three. I used to cart her around on my hip when she was a baby – I’ve pretty much known her forever! Kate was always very artistic at school, she could always draw. Right back when she was little, I used to look at her work and say, ‘One day I’ll write some books and you can draw the pictures,’ never knowing that dream of mine would actually come true. When I wrote That Cat, and knowing the sort of work Kate does and how she’s become this extraordinary, mega-talented claymation artist, I thought she might want to do it. I got in touch with her mum to get a hold of her and said, ‘Let’s give this a go’. I didn’t know if we would get anywhere with it but it was certainly worth giving it a shot. It was fantastic and we’ve now got some other projects on the go too.

Kate – I was so excited! I remember Jacquie was the most popular teacher in primary school, she would sometimes read us stories she wrote and I remember her saying, ‘One day I’m going to write this book’, and she’s had so much success. When she reached out to me I was so stoked. I didn’t know what the book was about but I was totally keen.

Jacqueline – When I was teaching I used to tell the children scary stories, too apparently, and Kate remembers some of those. She tells me I used to talk about a bunyip in the oak tree out the front. I know I was always making up tales to entertain my students.

Kate – Yes, I don’t have strong memories of school but kindergarten has especially stuck with me. It’s important to have good memories of when you’re younger, especially as a children’s illustrator.

When illustrating That Cat I had to trust my ideas. There were a few things I needed to change and I had to think about everyone who was going to read it, but I just made sure I had the confidence to do it.

Jacqueline – Kate will take my words and have her own vision of how to make them come to life. It’s as much about her and what she can bring to the table as it is about the words that I wrote in the first place. I don’t want to be bossy, that’s not my place. An illustrator is an artist and has their own vision and it’s important to allow them to see that through.

What Kate did was perfect. The minute I saw her idea for That Cat I thought, ‘This is awesome’. It’s so quirky and different and there’s nothing out there like Kate’s work. It’s just really fresh. She draws exactly the same way she did as a five-year-old. Of course, it’s more sophisticated now but there’s still a real playfulness and youth about it that I absolutely love.

Kate – I had a few pictures of Bally Puss and I had two cats of my own. When illustrating I think about the personality of the cat and how you relate to it, then the ideas evolve. Like Fat Cat, I could see he could have been a bit of a gangster.

When illustrating, what I do is I read through the words a few times and have a break from it and talk it over. Then I’ll sketch out a few rough ideas on a big page to see if I like anything. It’s important not to put too much pressure on it at the start, because if I go in and try to create a perfect illustration it falls in a heap. I go back and forth, playing around with ideas, and eventually I set out an illustration on each page then send it off before refining the roughs a bit more.

Jacqueline – Picture books are very playful, and I am experimenting a lot with rhyming picture books at the moment. People think rhyme is really easy but it’s not. You’ve got to get the meter and the rhythm just right – it’s got to be perfect otherwise it falls on its head. It’s fun to play around with it and I read the stories aloud all the time to make sure they sound the way they should.

It’s a very different workload writing picture books. When I write Kensy and Max, they’re about 60,000 words long and you have to keep a lot in your head. When writing a picture book, it’s nice to have something that’s playful and, for me, something that’s shorter – though I wouldn’t say they’re easy that’s for sure.

When writing That Cat I thought I could do something simple and sometimes the simplest things end up being really good. The rhyming of the first two lines and the last couple of lines is important to get it bookended so it sounds right.

That Cat will actually be my 49th book published. I hope it’s a book that parents and grandparents will enjoy reading to small people because it’s quick. The illustrations add to the story and I’m sure young readers will spend a lot of time picking things out and finding something new each time.

Kate – I really enjoyed the process and I really care about the book and put as much effort into it as possible. I like who I work with and it’s a great opportunity, there’s a real personal attachment there and you really believe in it.

Jacqueline – I was so excited when Kate was interested in doing the project in the first place as we have such a longstanding history. I remember saying when she was finishing school that she would be a fantastic illustrator and, for me, I feel so fortunate to have been in a position where I could give her an opportunity to be part of the project. I adore her and I’d love to see us do lots of things together.

Kate – It’s fun and I think that’s the best thing about it.

Buy a copy of That Cat here. A Purrfect Collaboration: Read Our Review of That Cat by Jacqueline Harvey, illustrated by Kate Isobel Scott 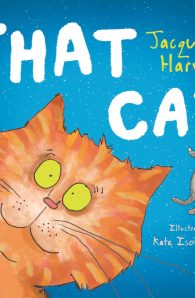 Recommended for ages 3+.An utterly delightful rhyming book, purrfect for the whole family.Nothing is quite like a cat.There are brat cats and fat cats, rat cats and mat cats . . . but if there's one cat everyone knows, it's THAT CAT.