The Night Whistler Author, Greg Woodland on the Story that Inspired his Debut Thriller In 1967 bigoted, small-town NSW, a disgraced detective and a twelve-year-old crime buff forge an alliance against the mysterious animal killer and psychopath terrorizing the boy’s family.

Synopsis Former Detective Mick Goodenough and twelve-year-old crime buff Hal Humphries have little in common except that they’re new to Moorabool, they’re friendless and they love dogs. Their lives collide at an abandoned caravan on the outskirts of town. Hal and his brother discover a murdered dog in a rusty drum and give him a Christian burial. Later, Constable Goodenough stumbles on the grave, realizes the dog is his missing German shepherd, Charlie, and vows to find the sadistic killer.

When Hal’s dad is sent away for weeks on business, his mum starts getting menacing phone calls from a caller who whistles and says he wants “to kill for her”. She fights back, and the Whistler’s terror campaign escalates.  Mick Goodenough believes the Whistler is more than a harmless ‘snowdropper’, but he’s laughed out of the station by his superiors.

Hal launches his own investigation, helped by his new friend, a feisty Aboriginal girl called Allie. Their hunt for the Whistler is a distraction for Hal from the breakdown of his parents’ marriage. It becomes more than that when he finds the body of his father’s mistress in the old caravan.  The cops quickly convict her husband of the murder but only Mick recognizes the animal-killer’s handiwork and the looming danger to Hal’s family.

I had previously written a genre novel (paranormal – vampire/ horror– as yet unpublished) and nine or ten screenplays, and I had been thinking for quite a while about writing a second novel. A writing teacher’s advice, to write what you like to read seemed the answer. What I read mostly, is crime fiction. I’ve been a crime fan most of my life, starting with Sherlock Holmes and Agatha Christie at age twelve. A screenplay (The Whistler) that had been in my bottom drawer for a few years – a dark coming of age domestic noir story set in country NSW in the 1960s (a bit like Jasper Jones, or Donna Tartt’s The Little Friend) kept calling me back. So I thought that it could make a good cornerstone for a rural crime story. I then needed two other strong strands: an unnerving, cunning and cruel psychopath and a charismatic and smart maverick detective, courageous and persistent enough to catch him. I wanted him to be someone up against the system: an ex-Homicide detective who’d been traumatized by an unsolved murder case which had put him at odds with his fellow cops and had led to his being demoted back to probie (probationary constable) and sent to a small town police station out at woop-woop, where he would be low man on the totem pole, an “unwelcome guest” in the town. But one whose inability to toe the line puts him in the best position to solve the crime. This became my first foray into writing a rural crime novel.

The research was great fun. It began with sifting through unsolved Australian crimes of the  1960s and ’70s on the internet as a background for my detective – and I latched finally onto a book called Wanda, Alan Whitticker’s true-crime book about the Wanda Beach Murders. In some photos of men in suits and hats combing the sand dunes of Wanda Beach next to some shallow graves on a stinking hot 1965 January weekend, I found the model for my detective. I read a lot of internet articles and some books about psychopathic killers and how they develop their skills and taste for killing – which was very creepy. Alan Whitticker’s book Australian Psycho, was very useful. Then I wanted to immerse myself in the small-town environment, so I did a number of road trips up to the New England, NSW, area. I returned to Tamworth and Armidale where I spent ten years on and off,  as a kid and a teenager. I drove and walked around the streets of South Tamworth where the events that inspired the story had occurred. Then I began to look at much smaller towns of 2-5,000 population. Based in Armidale, over a number of one-week trips I spent quite a few days driving and walking around Uralla, Walcha, Guyra, Glen Innes, Tenterfield, Inverell, and tiny towns like Emmaville, Llangothlin, etc and walking a lot of country lanes, tramping around the bush and just getting the feeling for this kind of central-north high country. In local libraries and in UNE’s Dixson Library I dug about in old newspapers from the late ’60s – early ’70s and got a stronger sense of place, time and people – and of the argot of the day, which I use quite a lot in dialogue.

There are Indigenous characters in it, so I contacted Indigenous people from the Armidale area, who were extremely helpful, especially a man of my own age who’s lived there all his life, who was able to give me great feedback and more info about growing up Aboriginal in Armidale, what was Anaiwan country, and race relations in those times. I also spoke with three policemen, one of whom was approaching retirement, whose career had begun in the early ’70s. They were able to tell me a lot about country policing in small one- to five-man police stations back then: what kind of power senior policemen wielded (a lot) and how they related to people in the town, black and white.

Tell us about your background and what led you to writing this book?

The Night Whistler was inspired by a true story my mother told me. In the late 1960s my family was living in a typically bigoted small town, Tamworth NSW, and my dad was a commercial traveller. He loved being out on the road and he’d go away for weeks on end, leaving Mum to bring up their five little boys on her lonesome. And if that wasn’t enough, for one whole year she had what we now call a stalker. She called him the nuisance caller, the prowler, the whistler, and tried to keep him secret from us kids, but some of us knew. To us he was this mysterious menacing bogeyman who always managed to evade our dad’s or the cops’ attempts to catch him and when they were gone he’d come back, tapping on windows or under the floor, frightening the heck out of us. I wrote a screenplay based on that story that almost but never quite became an international feature film, at the time of the GFC. And that unproduced script wound up being the spark for this book, which is my first foray into writing a rural crime novel.

One piece of good advice that has helped me as an author:

It’s such good common-sense practical advice it’s worth taping it to the wall above your PC and remembering in every scene – even when you’re writing about hateful or despicable characters, we still have to care for them. If the writer doesn’t care, how is the reader supposed to?

Some advice from me to emerging authors

Spend lots of time outlining before your first draft. Then throw it away doing your second draft, and try filling the gaps by pantsing it. Your Preview Verdict: The Night Whistler by Greg Woodland Try an Extract From Greg Woodlands's The Night Whistler 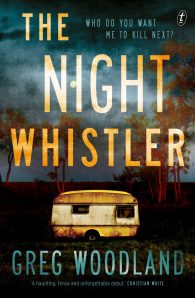 The summer of 1966–7. Hal and his little brother have just come to live in Moorabool. They’re exploring the creek near their new home when they find the body of a dog.Not just dead, but killed.Not just killed, but horribly maimed.Constable Mick Goodenough, recently demoted from his big-city job as a detective, is also new in town—and one of his dogs has gone missing. Like other pets around the town.He knows what it means when someone tortures animals to death. They’re practising. So when Hal’s mother starts getting late-night phone calls—a man whistling, then hanging up—Goodenough, alone among the Moorabool cops, takes her seriously. But will that be enough to keep her and her young sons safe?Nostalgic yet clear-eyed, simmering with small-town menace, Greg Woodland’s wildly impressive debut populates the rural Australia of the 1960s with memorable characters and almost unbearable tension. 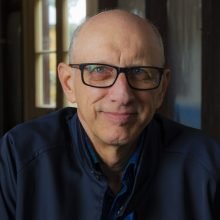 Greg Woodland is an author, screenwriter and director. Since 2000 he’s worked as a freelance script editor and consultant for film funding bodies and the Australian Writers’ Guild. The Night Whistleris his first novel. 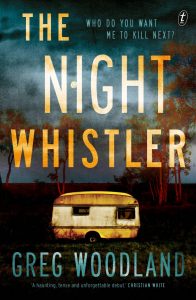