A message from Cheryl Akle, Director

For those of you who know me, you’ll know that I very much identify with being a Lebanese Australian – loud and proud. Even though I was born in Sydney, I grew up speaking Arabic at home and eating Lebanese food. When I started school, I could not speak a word of English. I had the best childhood, surrounded by family and friends, and my memories of growing up in Redfern then Glebe are full of joy and happiness.

A few years ago I went on a holiday to Lebanon and stayed in the region that has been decimated by the recent blast. I remember arriving at Beirut airport with my Australian passport in hand and the young customs guy looked at passport and then at me and said, ‘welcome to your homeland’. It was very emotional for me.

I’m sharing this with you today because many of you have asked after me and my family. I really appreciate the lovely emails from our readers. So I’m letting you know that I’m good – my uncles, aunts and cousins are safe, however they’re devastated and broken.

To acknowledge my family and all the other wonderful people I’ve met in Lebanon, we’ve put together a list of Lebanese authors. As you readers know, the way to make sense of the world is to read. It also humanises people who seem far away, bringing them and their stories into your home and your heart. This list is by no means definitive and if you have any suggestions I’d be happy to hear them.

In the meantime, our thoughts are with the Lebanese people.

Omar Sakr is an award-winning poet born and raised in Western Sydney to Lebanese and Turkish Muslim migrants. He is the author of These Wild Houses (Cordite Books, 2017), a collection of poetry shortlisted for

the Judith Wright Calanthe Award and the Kenneth Slessor Prize for Poetry, and The Lost Arabs (University of Queensland Press, 2019), which has been shortlisted in the Queensland Literary Awards, for the John Bray Poetry Award, and for the NSW Premier’s Literary Awards. In 2019, Omar was the recipient of the Edward Stanley Award for Poetry.

Saleem Haddad was born in Kuwait City to an Iraqi-German mother and a Palestinian-Lebanese father. He

has worked with Médecins Sans Frontières and other international organisations in Yemen, Syria, Iraq, Libya, Lebanon, and Egypt. His first novel, Guapa, was published in 2016, a political and personal coming-of-age story of a young gay man living through the 2011 Arab revolutions. The novel received critical acclaim from the New Yorker, The Guardian, and others, was awarded a Stonewall Honour and won the 2017 Polari First Book Prize.

Hanan al-Shaykh, an award-winning journalist, novelist, and playwright, is the author of the short-story collections I Sweep the Sun Off Rooftops and One Thousand and One Nights; the novels The Story of Zahra, Women of Sand and Myrrh, Beirut Blues, and Only in London; and a memoir about her mother, The Locust and the Bird. She was raised in Beirut, educated in Cairo, and lives in London.

Nada Awar Jarrar was born in Lebanon to an Australian mother and a Lebanese father. She has lived in

London, Paris, Sydney and Washington DC and is currently based in Beirut where she lives with her husband Bassem and their daughter Zeina. Her first novel, Somewhere, Home won the Commonwealth Best First Book award for Southeast Asia and the South Pacific in 2004. Her noel, Dreams of Water is set during the 1980s civil war in Lebanon.

Michael Mohammed Ahmad is an Arab-Australian writer, editor, teacher and community arts worker, and received his Doctorate of Creative Arts at Western Sydney University in 2017. He is the founder and director of Sweatshop, a literacy movement in Western Sydney devoted to empowering culturally and linguistically diverse artists through creative writing. His debut novel, The Tribe, received a 2015 Sydney Morning Herald Best Young Australian Novelists of the Year Award. His next novel, The Lebs was a Miles Franklin Literary Award Finalist

Sarah Ayoub is a  freelance journalist and author based in Sydney, Australia. Her work has appeared in dozens of magazines. Her novels Hate is Such a Strong Word and The Yearbook Committee are contemporary stories of identity, belonging and discovery. She regularly speaks at schools and writer’s festivals about identity and self-worth in YA fiction, and is passionate about empowering young people to see the value in their own personal stories.

Raymond Khoury is the New York Times and internationally bestselling author of four Reilly adventures, as well as two standalone thrillers. His debut novel, The Last Templar, spent twenty weeks on the New York Times bestseller list and was adapted for television by NBC. His books have been translated into over forty languages and sold over ten million copies. He was born and raised in Beirut, but relocated to the states when the Civil War broke out. He now divides his time between Beirut, London and Dubai. 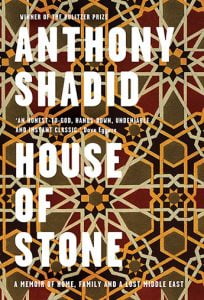 Anthony Shadid was a foreign correspondent for the New York Times and former Baghdad bureau chief of the Washington Post. Over a fifteen-year career, he reported from most countries in the Middle East. He won his first Pulitzer Prize in 2004 for his coverage of the US invasion and occupation of Iraq. He won a second in 2010. Shadid is the author of Legacy of the Prophet: Despots, Democrats and the New Politics of Islam, and Night Draws Near: Iraq’s People in the Shadow of America’s War, which was a finalist for the National Book Critics Circle Award. Shadid died of an asthma attack while attempting to leave Syria on horseback in February 2012. His memoir, House of Stone is an unforgettable meditation on war, exile, rebirth and the universal yearning for home.

Lebanese-American painter, poet, and philosopher Kahlil Gibran is best known for The Prophet, although he left behind an important body of work.