This was the impossible question that eight-year-old Adam Hargreaves asked his dad in 1971. After some thought, Roger Hargreaves picked up a Magic Marker and drew his son a picture of Mr Tickle: a round, orange little creature with a blue top hat and extraordinarily long arms – all the better to TICKLE Adam with!

Roger wrote a short story for Mr Tickle and the fun began. Along came Mr Greedy, Mr Happy, Mr Sneeze, Mr Daydream, Mr Funny and over thirty more. Roger wanted his books to be small, just like the children who would read them, and the book series quickly became a hit in multiple languages.

In 1981, Little Miss Bossy entered the scene with a round mouth, a daisy in her cute red hat and big boots to stomp around in. Roger produced another twenty Little Miss characters before his death in 1988.

After his father passed away, Adam Hargreaves took over the Mr Men and Little Miss brand and had a blast writing and drawing more characters for children. There were seasonal books released (including Mr. Christmas), brand partnerships, merchandise, guide books (such as Mr Bump’s Guide to DIY), board books, colouring books and more. Multiple TV series have been created – first in the 1970s, then 1990s and again in 2008.

Mr Men and Little Miss have been a family favourite for 50 years now, and there’s a character within us all. Multiple generations have adored this series, with a Mr Men and Little Miss book being sold every 2.5 seconds worldwide. So many Australians have fond memories of settling in for a bedtime story with parents and grandparents, snuggled up relaxing in bed . . . or nervously awaiting the guaranteed tickle attack at the end of the book!

To celebrate 50 years of this iconic brand, a special anniversary edition of Mr Tickle has been released with a gold foil cover and the story of how it all began.

There are now over 90 characters to choose from in the Mr Men and Little Miss universe. Which character are you? It All Started with a Question: Read our Review of Mr. Tickle by Roger Hargreaves 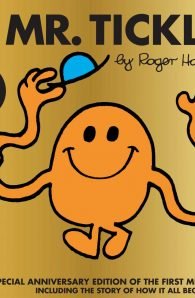 Enjoy the story that first introduced the Mr Men to the world in this special 50th anniversary edition! Mr Tickle is small and round and has arms that stretch and stretch. Extraordinarily long arms, perfect for tickling! In 1971 Mr Tickle was published, bringing fun, tickles and laughter to children everywhere. Now, 50 years later you can enjoy this special upsized edition of the classic story with a bonus new story about how it all began. The perfect gift for fans of the Mr Men. The Mr Men and Little Miss have been delighting children for generations with their charming and funny antics. Bold illustrations and funny stories make Mr Men and Little Miss the perfect story time experience for children aged two up. Have you met them all?

The late Roger Hargreaves was an English author and illustrator of childrens' books, including the popular Mr. Men and Little Miss series. 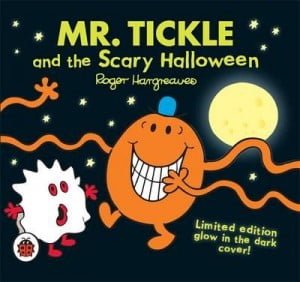 Mr. Tickle and the Scary Halloween 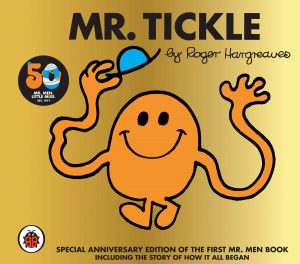