Book of the Week: Jonathan Unleashed by Meg Rosoff 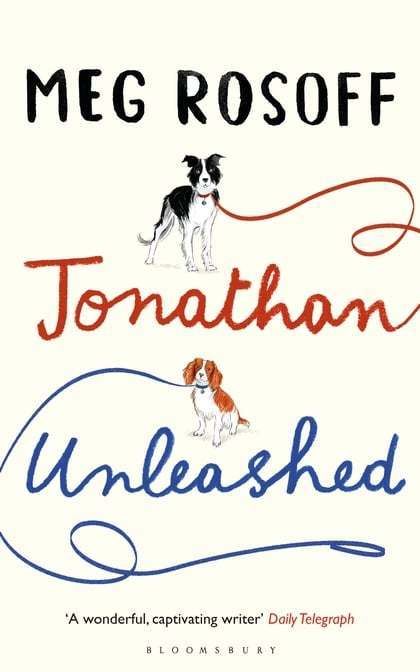 The first adult novel from bestselling young adult author Meg Rosoff is a quirky and unconventional coming-of-age story that is delightfully funny and thought-provoking.

Twenty-something Jonathan has moved to New York City for a soul-destroying job writing mind-numbing ad copy for a pen company – not that he needs to bother as the annoying marketing manager ignores most of his great ideas anyway. But on the bright side he’s working alongside his best childhood friend Max and has found a rare affordable apartment. His brother has gone to Dubai leaving his two dogs with Jonathan – a lovable spaniel called Sissy and a proud collie, Dante.  Jonathan loves the dogs but is worried for their emotional welfare. Increasingly neurotic, he continually takes them to the vet, wondering if they might hate their life. The young English vet Dr Clare tells him to stop worrying so much.

When his stupendously boring but prettily perfect girlfriend Julie (who doesn’t care for dogs) arrives to share the tiny Manhattan apartment, after scoring a fabulous promotion at a bridal magazine, life couldn’t get much worse. But Jonathan hopes it all might resolve itself if he catapults himself into adulthood by marrying Julie – live-streamed on the internet, all expenses paid by Bridal 360 magazine.

Jonathan’s life unravels as he spirals into craziness, endlessly working on comic strips in which his clients play unflattering parts. Julie, who he never really wanted to marry anyway, falls in love with another man while walking the dogs. Jonathan loses the ability to form coherent sentences and desperately seeks help from the people he thinks he’s falling in love with: the lovely vet Dr Clare, his androgynous co-worker Greely, and the attractive owner of a French café.

Jonathan Unleashed is a modern fairytale of disillusionment in New York, where everyone complains and it’s only normal to have an existential crisis on a daily basis.  Rosoff’s descriptions of life in downtown Manhattan are spot-on and we can’t help but warm to Jonathan’s off-beat personality.

This is Meg Rosoff’s first foray into adult fiction and fans of her YA novels won’t be disappointed. The fifteen years she worked in advertising before her writing career will have informed some of the hilarious anecdotes about Jonathan’s profession.

Rosoff is best known for her first YA novel, How I Live Now, that sold over a million copies,won the Guardian Children’s Prize and the Printz Award in the US and was made into a film. Her subsequent five novels have been awarded or shortlisted for numerous literary awards. Originally from Boston, she lives in London with her husband, the painter Paul Hamlyn, their daughter and their dogs.

To read an extract or purchase a copy of Jonathan Unleashed, click here