Book of the Week: My Absolute Darling by Gabriel Tallent Freud would go to town on this one. It’s disturbing, atmospheric, and utterly mesmerising. But first, a forewarning: in the history of Better Reading book recommendations it’s unlikely we’ve encountered a book as provocative and confronting as My Absolute Darling by Gabriel Tallent. It deals with themes of child sexual assault and violence that some readers may find distressing. The protagonist of this story, Turtle Alveston, is mistreated in horrible ways by her reclusive, possessive, monstrous father. He does terrible unspeakable things to her, and Tallent doesn’t shy away from writing them with sometimes explicit detail.

However, if you do find these kind of twisted tales palatable, well, strap yourself in – because Tallent’s novel takes you on a furious psychological rollercoaster. Here at Better Reading we steamroll through books, getting through three, sometimes four a week – easy. And yet nothing we’ve read in 2017 has left an impression quite like My Absolute Darling.

Right. Now that we’ve delivered a superlative introduction, let’s get into justifying it.

Fourteen-year-old Turtle Alveston adores her father more than anything else. He teaches her how to shoot a shotgun, protects her against the judgmental eye of her schoolteachers (she’s flunking class), and late at night she lies in bed, expecting him. Her imagination is rotten with violence and misanthropy, corrupted by the abusive, treacherous control of her daddy. Her life is consumed by his unchecked psychosis.

But Martin’s grip on his daughter, his absolute darling, begins to slip. Turtle’s very slow disenchantment with her daddy’s chokehold on her life causes him to escalate his violent and erratic behaviour – growing to a cataclysm that no doubt will expose their terrible secret to those curious people – teachers, old friends, and neighbours – who are beginning to catch on . . .

But how to rationalise this unsettling tale? It’s not quite the transgressional fiction of Chuck Palahniuk, which is usually a screw-you to authority or institution or society. Nor is it the timely social critique of Bret Easton Ellis’ seminal American Psycho. It’s far more domestic, microscopic. My Absolute Darling is, at its core, a revenge story that is beautiful detailed and terribly affecting.

There is something obviously repellent in documenting one man’s psychotic abuse of his daughter. Tallent has written a book that resonates for its sad probability. This narrative is taboo, for sure. But kitsch? Far from it. Provocateurs by definition polarise, and we anticipate that My Absolute Darling is guaranteed to make a lasting impression on you, one way or another.

Stephen King has published glowing praise for this debut, not only describing it as a ‘masterpiece’ alongside perennial classics such as To Kill a Mockingbird, The Things They Carried, and Catch-22; he states that ‘Fourteen-year-old Turtle Alveston is a brilliantly rendered creation, and her father is the most terrifyingly believable human monster to inhabit the pages of a novel . . . This book is ugly, beauty, horrifying, and uplifting.’

See what we mean? It’s even got the master of horror spooked.

Gabriel Tallent was born in New Mexico and raised on the Mendocino coast by two mothers. He received his BA from Willamette University in 2010, and after graduation spent two seasons leading youth trail crews in the backcountry of the Pacific Northwest. Tallent lives in Salt Lake City. This is his first novel.

Grab a copy, read our Q&A with Gabriel, and read his piece on writing. 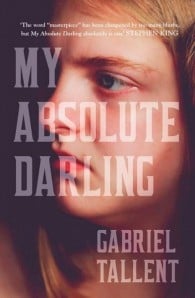 'You think you're invincible. You think you won't ever miss. We need to put the fear on you. You need to surrender yourself to death before you ever begin, and accept your life as a state of grace, and then and only then will you be good enough.'At 14, Turtle Alveston knows the use of every gun on her wall; That chaos is coming and only the strong will survive it; That her daddy loves her more than anything else in this world. And he'll do whatever it takes to keep her with him. She doesn't know why she feels so different from the other girls at school; Why the line between love and pain can be so hard to see; Why making a friend may be the bravest and most terrifying thing she has ever done And what her daddy will do when he finds out...Sometimes strength is not the same as courage. Sometimes leaving is not the only way to escape. Sometimes surviving isn't enough.'There are books we like well enough to recommend, but there are a very few—TO KILL A MOCKINGBIRD, CATCH-22, THE THINGS THEY CARRIED—that we remember forever. To my own shortlist I can now add MY ABSOLUTE DARLING, by Gabriel Tallent. Fourteen-year-old Turtle Alveston is a brilliantly rendered creation, and her father is the most terrifyingly believable human monster to inhabit the pages of a novel since Harry Powell in THE NIGHT OF THE HUNTER. This book is ugly, beautiful, horrifying, and uplifting. The word “masterpiece” has been cheapened by too many blurbs, but MY ABSOLUTE DARLING absolutely is one.' – Stephen KingAbout the author Gabriel Tallent was born in New Mexico and raised on the Mendocino coast by two mothers. He received his BA from Willamette University in 2010, and after graduation spent two seasons leading youth trail crews in the backcountry of the Pacific Northwest. Tallent lives in Salt Lake City. My Absolute Darling is his first novel.

Gabriel Tallent was born in New Mexico and raised on the Mendocino coast by two mothers. He received his BA from Willamette University in 2010, and after graduation spent two seasons leading youth trail crews in the backcountry of the Pacific Northwest. Tallent lives in Salt Lake City. My Absolute Darling is his first novel. 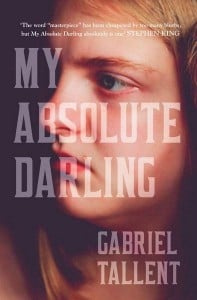