British-Australian thriller author, L.A. Larkin, has been likened to Michael Crichton and Matthew Reilly. The Genesis Flaw was nominated for four crime fiction awards and Thirst described as ‘the best Antarctic thriller since Ice Station’. Her latest book Devour is our recommended Weekend Read.

The Chronicles of Narnia series by C.S. Lewis

A British expedition to Antarctica in 2012 led by Professor Martin Siegert, who kindly shared his adventures with me when I met up with him in the UK. He and his team were attempting to drill through three kilometres of ice to reach the subterranean Lake Ellsworth, hoping to discover new life. Despite a Herculean effort, they did not succeed in their mission. But their efforts begged the question: what if they had discovered life that threatened our existence?

Describe Devour in one sentence…

Investigative journalist, Olivia Wolfe, must uncover a terrifying truth buried deep beneath the Antarctic ice if she is to stop a man who would obliterate civilisation.

The best part of writing Devour was . . .

Travel to research my books. As the next Olivia Wolfe thriller is partly set in Africa, I hope to return there. Many years ago I travelled overland from Kenya to South Africa. 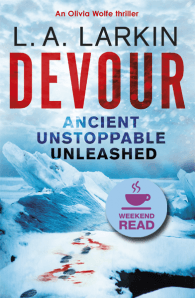 Their greatest fear was contaminating an ancient Antarctic lake, buried beneath the ice for millions of years. They little knew the catastrophe they were about to unleash.Welcome to the high octane world of Olivia Wolfe.As an investigative journalist, Wolfe lives her life in constant peril. Hunted by numerous enemies who are seldom what the first seem, she must unravel a complex web of lies to uncover an even more terrifying truth.From the poppy palaces of Afghanistan and Antarctica's forbidding wind-swept ice sheets, to a top-secret military base in the Nevada desert, Wolfe's journey will ultimately lead her to a man who would obliterate civilisation. She must make an impossible choice: save a life - or prevent the death of millions.Watch our live interview with L.A. Larkin below:https://www.youtube.com/watch?v=P58lJFu570A 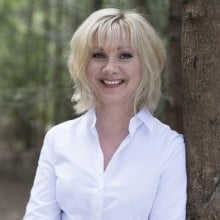 British-Australian thriller author, L.A. Larkin, has been likened to Michael Crichton and Matthew Reilly. The Genesis Flaw was nominated for four crime fiction awards and Thirst described as, 'The best Antarctic thriller since Ice Station'. An adventurer at heart, Larkin has spent time in the Antarctic, with scientists at the British Antarctic Survey and the Australian Antarctic Division. 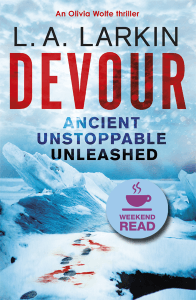