From Writing Films Like Jurrasic Park, to a Novel About a Deadly Fungus: Read a Q&A with Author of Cold Storage, David Koepp David Koepp is a celebrated American screenwriter and director best known for his work on Jurassic Park, Spider-Man, Panic Room, War of the Worlds, and 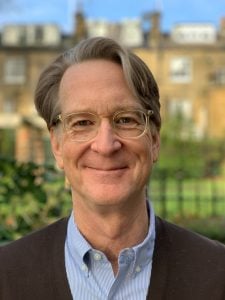 Mission: Impossible. His work on screen has grossed over $6 billion worldwide.

Cold Storage is a wild and terrifying adventure about three strangers who must work together to contain a highly contagious, deadly organism. Can you tell us a bit more about the book?

I’d always wanted to write something in a longer form, and a novel seemed like the grand experiment I needed to conduct.  What was intoxicating about it was that I got to use writing techniques that are unavailable to the screenwriter – for the first time in 30 years, I was able to write what a character THOUGHT or FELT, rather than just what they said or did.  I was a bit giddy with the freedom, so much so that I even decided to go into the point of view of the dead fungus itself.

The book is a combination of science, character work, body horror, and humor.  It’s a tricky blend, and one that I felt was more suited to prose than to screenwriting.

The initial idea came, as ideas often do, from walking down the street in New York City.  It was a steamy-hot August morning, and I passed a young man in a private security uniform.  It was 7 a.m., so I guessed he was either coming back from or going to a job he hated.  He looked pretty miserable.  But I had a flash of an idea, which was what if something horrible happened to him on the night shift, but what if this guy who hates his shitty job decides hey, this is MY shitty job, and I’m going to do it right.  That’s a guy whose story I’d like to tell.

From there the idea came together as bits of collected string – a mysterious beeping smoke alarm in our house whose source we couldn’t locate for two weeks (in a tiny attic we didn’t even know we had), a strain of Ophiocordyceps my science-obsessed son was fascinated with, and a healthy dollop from my memories of growing up in a small town in the Midwest.  They spun together into this story.

I wanted the first draft to be driven by the characters and my own story ideas, rather than real and plausible science.  So all the science in the book was just what I could read and research on my own, from books, magazines, and the internet.  After the draft was finished, I found a microbiologist who was willing to read the thing and consult on the project.  After he had a good laugh, we sat down and went through it bit by bit, making everything at least approach reality.  There are stretches, to be sure, but nothing completely outlandish or invented whole-hog.

You’re a screenwriter. How different is that to writing a novel, and will you continue writing novels?

Aside from the mechanical differences – movies are basically about what people say and do, whereas books are about what people think and feel – the differences in process are the biggest thing.  With a book, you are ultimately by yourself, whereas on a movie I’ve always thought everyone’s job description should be “assistant storyteller.”  Both approaches, the solitary and the collaborative, can result in good work, but they are very, very different ways of working.  I love them both, but I will say my interest in writing books has been piqued, and I am starting another one as we speak.

All good work influences me.  I read somewhere that we must jam in as much input as we can, through painting, photography, reading, theatre, cinema, talking to strangers, and anything else we can think of.  Then we take that accumulated information and impression, swirl it around in her heads, and what comes out is our own personal point of view.  I’ve always loved that and try to live that way.  When I’m not napping. 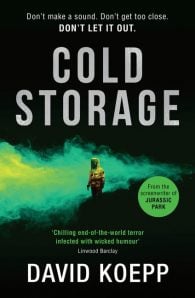 When Pentagon bioterror operative Roberto Diaz was sent to investigate a suspected biochemical attack, he found something far worse: a highly mutative organism capable of extinction-level destruction.Now, after decades of festering in a forgotten sub-basement, the specimen has found its way out and is on a lethal feeding frenzy. And only Diaz knows how to stop it.He races across the country to help two unwitting security guards – one an ex-con, the other a single mother. Over one harrowing night, the unlikely trio must figure out how to quarantine this horror again . . . before it's too late. 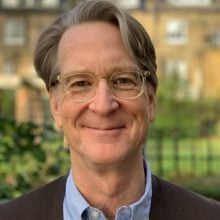 David Koepp is a celebrated American screenwriter and director best known for his work on Jurassic Park, Spider-Man, Panic Room, War of the Worlds, and Mission: Impossible. His work on screen has grossed over $6 billion worldwide. 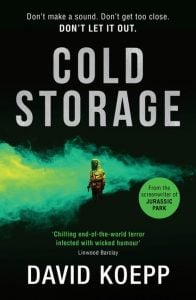