Tricia Stringer is a bestselling author of novels across three genres: historical saga, rural romance and now, women’s fiction. Her first book, Queen of the Road, won Romantic Book of the Year in Australia and she has been shortlisted for more awards. Tricia has spent many years in education as a teacher, a librarian and in middle management; with her husband she took on the first licensed Post Office in South Australia where they included a bookshop, and she now works as a full-time writer. Tricia travels Australia and sometimes overseas researching and drawing inspiration for her novels which always feature an authentic Australian voice. Home is a place near the beach in rural South Australia.

Purchase a copy of Table For Eight here

Read our review of Table For Eight here

Women’s fiction is such a broad term covering all kinds of writing styles. It’s easy to stray into other genres but the general consensus seems to suggest that to be women’s fiction the story needs to be centred around women (sorry to the men reading this) with a focus on women’s life experience and marketed to female readers. To that end I’ve looked back over my reading pile over the years and sifted out the books that I’ve particularly enjoyed that fit this description and said why I liked them. Now I see there’s also historical links in many of them but expressed in quite different ways. I’d love to know what you think.

I read this delightful story when it was first published in 2009 and I’ve been reminded of my enjoyment now that it’s a film. Not that I’ve seen the movie adaption. The main character is Juliet, a writer with writer’s block (maybe that struck a chord), who corresponds with the members of the Guernsey Literary and Potato Peel Pie Society, a group formed during the oppressive German occupation of Guernsey. I love historical books and this story is a totally different take on life for one particular group during World War Two.

Pearl in a Cage by Joy Dettman

If you’ve ever lived in rural Australia you will relate to this story which digs down into the heart of a community in the 1920s and 30s and slowly peels back the layers, some good and some deeply disturbing. I was hooked from the opening page and didn’t want to leave the characters behind. Pearl in a Cage should come with a warning. It’s extremely addictive and I went on to enjoy the other five books in the Woody Creek series.

The Distant Hours by Kate Morton

A story that began with a letter arriving in the mail postmarked fifty years ago had me hooked straight away. A daughter becomes intrigued by her aloof mother’s past and the reader is skilfully transported between the era of World War Two and the 1990s as the implications of the letter are uncovered and the revelations of past relationships and actions impact on the present.

Daughter of Mine by Fiona Lowe

A great saga involving four women from rural Victoria, a mother and her three, all very different, adult daughters. Very early there’s a scandal that begins to crack the seemingly flawless façade of a family born to entitlement and it’s a roller coaster ride of revelations from there. I loved the strong characters, the detail of the setting and the perfect storm of a family in crisis.

Another book set during war, the First World War this time, Miss Lily is an intriguing character and as the story unfolds so does her secret. Young Sophie, an Australian heiress, is sent to England to be tutored by Miss Lily, so this is also about a young woman’s journey into adulthood during the early 1900s. Friendship, various forms of love and a different take on the often overlooked efforts of women during war made an intriguing read.

The Trip of a Lifetime by Monica McInerney

I love Monica’s stories of family ups and downs and this one was particularly good because it involves one of my favourite characters from her other books, Lola Quinlan. Lola is in her senior years and decides to go back to her Irish homeland. She takes one of her granddaughters and her great-granddaughter with her. No-one knows why Lola left Ireland in the first place and at eighty-five Lola is finally facing her past. While there are some difficult topics the story is also full of warmth and humour.

The Birdman’s Wife by Melissa Ashley

Many will remember the fantastic work of John Gould in recording Australia’s bird life but what you might not know, I certainly didn’t, was that his wife Elizabeth drew the beautiful detailed illustrations. Together they had eight children but John was often away and this remarkable woman was left to hold the fort and remain in her husband’s shadow. The story is fiction told in the first person through Elizabeth’s eyes and that’s what I found fascinating. To ‘experience’ the life and times with this incredibly talented woman, her joys, her sorrows and her hardships, made it an interesting read.

Alice is only nine and living with a controlling father and an oppressed mother when tragedy strikes and she is taken into the care of her grandmother, June, a woman she didn’t know existed. June whisks Alice away to a very different life on her flower farm. I love the way the flowers are an integral part of this story, which is not just about Alice finding her true self but also the healing journey of several other traumatised women. I was transported to the locations of the novel and the characters stayed with me a long time after turning the final page.

The Lace Weaver by Lauren Chater

I have to admit to knowing little about Estonian history and I found this both bold and gentle story a wonderful insight. It’s the tale of two very different but equally heroic women set in a unique window of the war, Estonia and Russia in 1941. Even though there is tragedy the friendship between the lace weavers, all women, is remarkable. It’s an often sad story but also full of hope and I particularly enjoyed the way the lace weaving and the knitting circles appeared throughout.

I loved this book told through the regular get-togethers of siblings and partners, new and old. It was refreshing, funny, sad and all emotions in between. There were so many wonderful characters and twists in the story that kept me guessing. I listened to it as an audio book and I felt as if I was part of the family at the dinner table. Each character had their own clear voice and I enjoyed finding out about them. A warm uplifting tale. 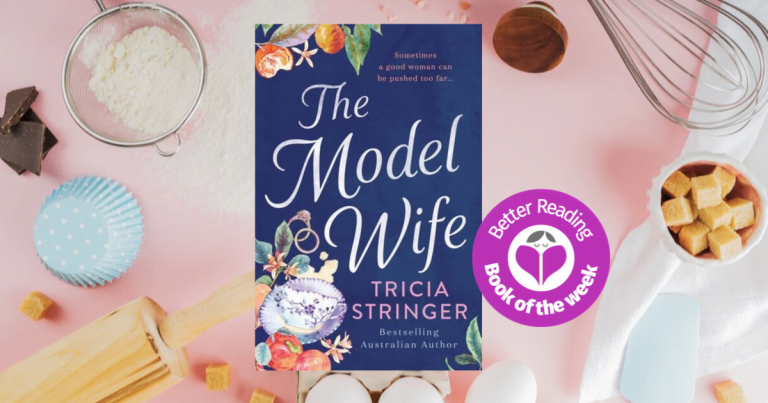 Bestselling author and master storyteller Tricia Stringer's tackles troubled relationships, second chances and love old and new in this uplifting story of unlikely dining companions thrown together on a glamorous cruise. Readers of Liz Byrski, Monica McInerney and Rachael Johns will love this book.‘A delightful, wise and heart–warming novel about second chances that celebrates friendships old and new. I devoured every page.' Rachael JohnsA cruise – no matter how magical – can't change your life. Can it…?Clever, charming dressmaker Ketty Clift is embarking on her final cruise from Sydney before she must make serious changes in her life. Supported by the ship's all–powerful maitre d' Carlos, she has a mission: transform the lives of those who join her at her dining table every evening. Not only can Ketty turn Cinderellas into princesses with her legendary style–eye, but she has a gift for bringing people together.But this trip is different. As the glamour and indulgence of the cruise takes hold, and the ship sails further away from Sydney towards the Pacific Islands, it becomes clear that her fellow travellers – a troubled family, a grieving widower and an angry divorcee determined to wreak revenge on her ex – are going to be harder work than usual.As Ketty tries to deal with her own problems, including the unexpected arrival on board of her long–lost love, Leo – the man who broke her heart – as well as troubling news from home, she begins to realise this might be the one cruise that defeats her…A witty, warm and wise story of how embracing the new with an open heart can transform your life.