How I Met My Son: Yolanda Bogert’s Story ction: In 1995 we announced the arrival of our sprogget, Elizabeth Anne, as a daughter. He informs us that we were mistaken. Oops! Our bad. We would now like to present, our wonderful son — Kai Bogert. Loving you is the easiest thing in the world. Tidy your room.”

When Queensland mum Yolanda Bogert placed this ad in the classifieds of her local regional newspaper, she didn’t imagine the far-flung reach reach it would have, with the world’s media soon camped on her doorstep vying for interviews. While much of the reaction was positive – ‘This mother is an absolute legend,’ announced one headline – the family was overwhelmed and nineteen-year old Kai suddenly found himself in the glare of the world’s media and millions of social media users during a delicate time in his life. Now Yolanda, with Kai’s support, has written a book about this amazing story. It’s a story not only about Kai, but the story of a teenage mother and her fierce love for her children – told with searing honesty, original writing and blistering humour.

We spoke to Yolanda Bogert about her funny, sad, inspiring book, How I Met My Son, and she tells us about her family’s reaction to the book and why Australia has got ‘a ways to go’ in its treatment of trans folk.

Better Reading: Life has changed for you and Kai since that fateful birth notice in the classifieds. Obviously you couldn’t have envisaged the attention it would receive, going viral all over the world?

Yolanda Bogert: No, even though it was put in the paper, I still had something of a sense that nobody much would even see it, tucked in the back in the birth notices. Who reads those? I thought it would be something cute for Kai to cut out and keep and know that he was loved – exactly the same as any other birth notice.

BR: Guilt is a familiar emotion for any parent and In How I Met My Son you express mixed feelings about the birth notice especially because of privacy issues for Kai and your family. Are you and Kai happy with that decision now?

YB: Going viral was a bit frightening at first and I was quite worried that I’d inadvertently exposed him to public scrutiny, which is not known for being kind, but things have turned out for the best. Kai is pleased that he has been able to contribute in some small way to trans visibility to make it easier for other kids to come out and be supported by their families, and if he’s okay with it, then I’m okay too.

BR: Was it a difficult decision to write a book with these issues of privacy in mind? It sounds like Kai has been fully supportive?

YB: We did deliberate over it for a while, but in the end we decided that it would be nice to be able to put context to the snippet of our lives that people had glimpsed and show that trans people are not just the two-dimensional caricatures often portrayed in media, but regular people with lives and hopes and dreams far beyond the relatively minor issue of gender.

BR: How much did you work with Kai on the book? Obviously he has input as he addresses the reader directly in some parts, but did you collaborate with him beyond this?

YB: This was my favourite part about the book – Both Kai and Myk’l reading over my shoulder as I was writing. Mikey had to give approval to the childhood anecdotes that include him, of course, and it was nice to share with them childhood stories that they’d forgotten about or that we hadn’t remembered in a long time. We spent a lot of time laughing and crying over hot chocolate in my study. For some of the heavier subjects like mental illness and suicide, it was really quite therapeutic to talk on that level, about what he wanted to share with the world and discussing it in depth to figure out exactly how we wanted to articulate it. I think we both felt quite positive and close through that process and I’ll really cherish those memories.

BR: You are by turns overwhelmed by the mainly positive reactions to your announcement of Kai’s transition, but there has also been some negativity and Kai still faces some hostility? How far does Australia have to go with its treatment of transgender people?

YB: Australia still dictates who a person can marry based on what’s in their pants. We lock up children in immigration detention for daring to ask us to keep them safe. We have paid three quarters of a billion dollars to facilitate religious indoctrination in schools, but have just cut the measly eight million dollars allocated to stop kids experiencing bullying because of gender and sexuality diversity from killing themselves. Trans people in Australia have a life expectancy that is much less than that of a non-trans person, experience homelessness at a vastly disproportionate rate when compared to the rest of the population, and they experience significant disadvantages in education, relationships, socio-economic status, career and health outcomes.

I’m gonna take a stab and say that we’ve got a ways to go.

BR: You talk about many of the ‘rules’ around talking about transgender – use of pronouns, correct terms, etc. but how can people know how to always be sensitive and say the right things?

YB: I don’t think ‘rules’ is the right word. I discuss respect, but there’s no burly trans guy waiting around the corner to shake a finger at you if you screw up or anything like that… I guess it’s just about respecting somebody’s autonomy and dignity and acknowledging their own sovereignty over their body and life – many of the common things that some people thoughtlessly put their foot in are pretty demeaning and dehumanising because they don’t just don’t include that simple concept.

Being sensitive really is as easy as saying “Which are your pronouns?” when you are unsure, and not asking strangers inappropriate questions about their body/sex life/private health care decisions the same as you wouldn’t if you were talking to anybody else.

Kai’s contribution to this answer: “Assume that we’re people and you’ll be fine. Duh.”

BR: We loved the story of your move to a farm in the country in How I Met My Son. Are you still living somewhere rural?

We live in a little town about an hour south of Brisbane city on one acre. The city folk still call it rural, but there are pavements and street lights and shopping centres – it’s definitely town to us!

BR: We understand that you’re now a nurse but is writing something you would like to pursue further?

I’m a second year student nurse. I don’t think I would write another memoir – besides that I’ve probably used up all my best anecdotes in this book, it was one of the hardest things I’ve ever done. I am actually working on my second book already, though. I love fantasy fiction and Kai has asked me to write a fantasy novel with a trans protagonist – we talk about plot and characters while we’re driving along, so I guess you could say it’s a collaboration.

BR: What has been the reaction of other family member’s to Kai’s transition since writing the book – your mother (has she read the part addressed to her yet?) and your other son, Myk’l?

I was kinda nervous about my Mum reading it, so I waited until nearly the last minute to show it to her – but she loved it. I know it brought up a lot of old emotional things for her too, especially around my teenage years, but we’ve had some good talks and I think we’re in a pretty good place, which is great. Myk’l has always been fine with it – He’s a big-hearted guy who loves his brother no matter what. (Except if he eats the last ice-cream in the box in the freezer. That’s grounds for disowning a brother, apparently.)

BR: Is the book aimed at those in a similar position to Kai as well as friends and family of transgender people? And what are your hopes that it can help anybody facing transition and their families?

The book is mostly aimed at Kai and Mikey, really. I love that they’ll have something of a tangible legacy to keep forever – when I’m not around anymore, they won’t have to wonder if I loved them – it’s there on every page.

My publisher, Martin at Affirm Press, is a bit excitable and he thinks it’s going to change the world… But I think my aspirations for it are a bit more modest. I hope that it might, in some small way, normalise gender diversity and show somebody who might be facing similar things that it’s really no big deal. Kai is exactly the same loveable sprogget that he always was – he’s just happy now. Their sprogget can be too.

For further resources and information, visit the website: www.sproggets.com 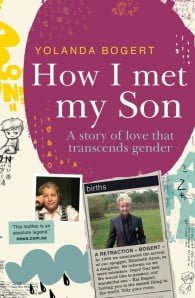 'The sky didn’t fall, and our family didn’t fall apart. We just started using different pronouns. Oh, I had to change the name stored in my phone with his number. That was a bit of a pain.’Yolanda Bogert, a mum from regional Queensland, made worldwide news when she placed a notice in a Brisbane newspaper in December 2014. It read: ‘A Retraction. In 1995 we announced the arrival of our sprogget, Elizabeth Anne, as a daughter. He informs us that we were mistaken. Oops! Our bad. We would now like to present, our wonderful son – Kai Bogert. Loving you is the easiest thing in the world. Tidy your room.’This is the story of Yolanda and her son Kai. As a teenage mum, Yolanda formed a close-knit bond with her child. Now, together, Yolanda and Kai deal with issues of acceptance, religion and tradition in a heart-warming story of love in transition.

Yolanda Bogert is a proud mother of two living in rural Jimboomba, Queensland. A former bookstore owner with her own incredible life story, this is her first book. 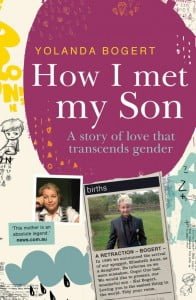 How I Met My Son