The ‘What If’ Moments That Spark an Idea: Jennifer Spence on writing The Lost Girls 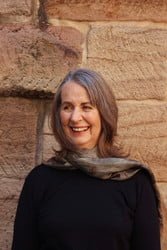 Jennifer Spence has worked as an English teacher, a scriptwriter of soap operas and a technical writer. She is the author of three children’s books and a crime novel. She lives in Sydney.

Purchase a copy of The Lost Girls here

Read our full review of The Lost Girls here

The Lost Girls is a haunting tale of love and loss – can you tell us a bit more about the book?

At the heart of the book is the story of Stella and her typical inner-suburban family in 1997, juggling work, kids and social life. The twist is that an older Stella slips back in time from 2017 and is able to observe and interact with this family. The story is told from the older Stella’s point of view. She, of course, knows what is going to happen to them all over the next 20 years, and she knows there is some major grief ahead. The question is, what will she do about it?

Despite this little aberration, I don’t think of ‘The Lost Girls’ as a time travel book. I admit right here that I am fascinated by time travel, and by all the paradoxes and conundrums surrounding that; but I wanted this book to be more about the emotional journey.

For example, Stella gets to visit her own mother, who has died in the interim. Impossible, but haven’t many of us yearned for such an opportunity, and imagined what it might be like? I wanted to describe that.

I hope the reader can overlook the unlikeliness of the time travel and focus on imagining the extraordinary experience of revisiting one’s own past life and observing it as an outsider.

Of course Stella does change things, so I am also exploring the sometimes devastating repercussions of that.

It was just an idle thought. Waiting at the bus stop one day, I thought for a moment that I recognised a young schoolgirl who was waiting nearby. Then I realised that the girl I was thinking of was my daughter’s age and would be in her thirties by now. But the idea persisted: what if I found myself twenty years in the past? What would I do, and what would it be like? I couldn’t get the idea out of my head until I had thought it through and come up with a rough plot.

I think those ‘What if?’ moments are some of the most powerful triggers to creating a story.

The Lost Girls cleverly shifts between the past and present – what was it like to write a story with multiple narratives and storylines?

It’s not that difficult to write – you just need to construct two stories in two different timeframes, and make judgements about when to alternate between them. The usual approach (sorry, reader) is to get one story to a tantalising point then leave it for a while and go back to the other story. I kept separate notes in which I tracked each story, and for a book like this I needed to keep a detailed timeline of all the major events.

It’s all one story, really – just the perspective that changes.

The hard part, though, is to keep the reader from getting lost. One thing that helped in this book is that the older Stella tells her story in the present tense, while the narratives of the periods before 1997, and from 1997 to 2017, are told in the past tense and presented as Stella’s memories.

The memory aspect is a real challenge for both reader and writer as Stella recalls her life both before and after 1997. At the start of the book Stella has clear memories of what happened in the last twenty years, but her actions now that she is back in 1997 will change some of those things. She can only remember what has actually happened, so some of her memories change without her realising it. I am counting on the reader noticing and understanding this!

The Lost Girls begs the question – how far would you go to save someone you loved? Why did you choose to explore this question/theme? And what did you want readers to take away from the book?

I do think a problem with the modern world is that people don’t know how to think about moral and ethical issues, and don’t trust their instincts about right and wrong. I don’t know any more than anyone else does, but I like to think about such things. Maybe it’s because I studied Philosophy for six years!

Most of us would agree that heroic, self-sacrificing acts are good, and hope that we would have the courage to perform them if called upon; but what about terrible, destructive acts that lead to the greater good? In Stella’s case it’s not even the greater good, but the compulsion to save her daughter that leads her to contemplate performing an evil act. It’s the extreme version of those horrible dilemmas, like Sophie’s Choice.

I can’t propose an answer and I don’t judge what Stella should or should not have done, but I do believe that it’s not black and white, that there is nearly always another alternative, and that it’s not possible to know what the consequences of your actions will be. And when those consequences do happen, you can never know where the other path would have led.

I can’t go past ‘Lincoln in the Bardo.’ It’s a great feat of the imagination and an extraordinary piece of writing. If I ever get to win an award I’m not going to say “I am humbled” – because in fact I would be extremely proud – but I am definitely humbled when I read writing like that. If only I had a fraction of George Saunders’ prowess!

It’s hard to single out one book on my ‘to read’ list. What if I am disappointed? But I am definitely looking forward to ‘The Silence of the Girls’ by Pat Barker. She is a great writer, and I love those books that shed a different light on ‘The Iliad’ and ‘The Odyssey’. I’m also planning to read ‘In Extremis: The Life and Death of the War Correspondent Marie Colvin’ by Lindsey Hilsum – an extraordinary story and it’s all true. And for a bit of escapist delight I have to find time for Neal Stephenson’s ‘The Rise and Fall of D.O.D.O.’, recommended by my son Tom and a must-read for time travel aficionados.

Discovering the Lost Girls: Read an extract from Fish out of Water A profound inner journey: Review of The Lost Girls #2 Off the Map A journey of self-discovery: Review of The Lost Girls #1 Fish Out of Water Being a Parent Makes you Vulnerable: Author of The Lost Girls, Jennifer Spence on the Mother-Daughter Relationship Podcast: The Magic of Storytelling with Jennifer Spence 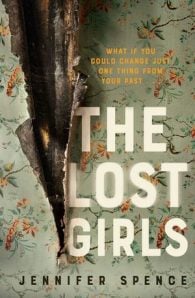 A haunting tale of love and loss that will make you think twice …What would you do if you had the chance to change a pivotal moment from your past?How far would you go to save someone you loved?These are just two of the fateful choices a woman must face in this highly original and hauntingly evocative detective story of love and loss.At the core of the enigmatic Stella’s story, past and present, is a mystery she is compelled to solve, a beautiful young woman who went missing fifty years ago – and a tragedy much closer to home she must try to prevent.As Stella unravels the dark secrets of her family's past and her own, it becomes clear that everyone remembers the past differently and the small choices we make every day can change our future irrevocably.This utterly original, gripping and mind-bending tale will stay with you long after the last page.'A beautifully compelling book that dares to not only ask “What if?” but to explore that question with heart-busting yearning, wry humour and masterful storytelling.' Kate Mulvany, playwright and actor?‘The Lost Girls is a wonderfully unsettling novel about anger, loss and hope. Tightly written and compulsive, its twists had me frantically turning the pages.’ Emma Viskic, award-winning author of And Fire Came Down and Resurrection Bay 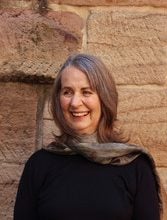 Jennifer Spence has worked as an English teacher, a scriptwriter of soap operas and a technical writer. She is the author of three children’s books and a crime novel. She lives in Sydney. 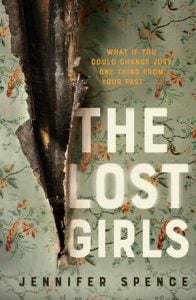