Killed on camera: review of Into the Night by Sarah Bailey 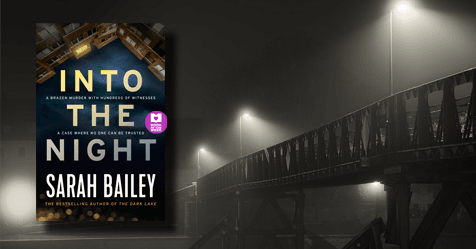 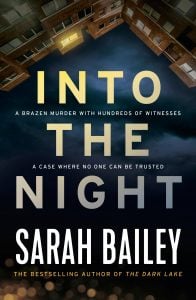 when I work a case, I feel time shifting around me…the dead tend to exist in a world that ignores traditional time zones, and part of them stays alive until we find their killer. There remains for each of them a soft pulse of hope that justice might still be possible one day, lurking in the smallest of clues.’

Detective Sergeant Gemma Woodstock is trapped in a downward spiral. Her marriage has deteriorated, her son is slipping further and further away from her, and she feels an intolerable emptiness that can only be dulled, albeit momentarily, by alcohol and a string of casual flings.

When a local homeless man is stabbed to death, Gemma is immediately drawn to the case. She obsessively resolves to find the killer, but her efforts are disrupted when a famous actor is murdered on the set of his new film. The celebrity death takes priority, and Gemma is paired up with Fleet – a sarcastic and anger-prone detective who doesn’t like to cooperate – to solve the new case.

The two grapple with the immensity of the task at hand – suspects raise more questions than they answer, and it seems that no one can be trusted. Despite the murder being caught on camera and witnessed by an entire casting crew, evidence is scarce. The case seems like a lost cause – that is, until they discover a vital piece of evidence that connects the two murders.

How can a homeless man and a celebrity fall victim to the same crime? Stabbed in the exact same place, by the very same weapon?

Into the Night by Sarah Bailey is a captivating novel that delivers all the trademarks of a successful crime thriller – suspense, mystery, and meticulous attention to detail. It exceeds expectations, however, by being so much more than a murder mystery. This book is, at its core, a book about self-sabotage – about the ways we hurt ourselves and others, the vices that consume us, and the loneliness that pervades our modern lives. Sarah’s characters are remarkably true to life – despite being troubled and ‘hollow’, they are characters of substance, layered and interesting in their thoughts and actions.

Sarah’s writing is clever and intimate. She has a talent for dialogue that reads as effortless and flowing, with distinct voices carried consistently throughout the entire novel. Readers looking for a crime fiction book with a strong, female lead, look no further – Into the Night is sure to please. 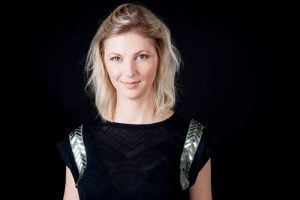 Sarah Bailey is a Melbourne based writer with a background in advertising and communications. She has two young children and currently works as a director of creative projects company Mr Smith. Over the past five years she has written a number of short stories and opinion pieces. Into the Night is her second novel. 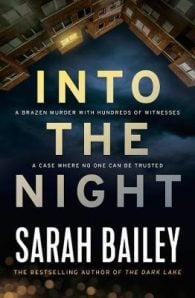 The riveting follow-up to The Dark Lake, acclaimed debut novel and international bestseller.Sarah Bailey's acclaimed debut novel The Dark Lake was a bestseller around the world and Bailey's taut and suspenseful storytelling earned her fitting comparisons with Gillian Flynn and Paula Hawkins.Into the Night is her stunning new crime novel featuring the troubled and brilliant Detective Sergeant Gemma Woodstock. This time Gemma finds herself lost and alone in the city, broken-hearted by the decisions she's had to make. Her new workplace is a minefield and the partner she has been assigned is uncommunicative and often hostile. When a homeless man is murdered and Gemma is put on the case, she can't help feeling a connection with the victim and the lonely and isolated life he led despite being in the middle of a bustling city.Then a movie star is killed in bizarre circumstances on the set of a major film shoot, and Gemma and her partner Detective Sergeant Nick Fleet have to put aside their differences to unravel the mysteries surrounding the actor's life and death. Who could commit such a brazen crime and who stands to profit from it? Far too many people, she soon discovers - and none of them can be trusted. But it's when Gemma realises that she also can't trust the people closest to her that her world starts closing in...Riveting suspense, incisive writing and a fascinating cast of characters make this an utterly addictive crime thriller and a stunning follow-up to The Dark Lake.

Sarah Bailey is a Melbourne based writer with a background in advertising and communications. She has two young children and currently works as a director of creative projects company Mr Smith. Over the past five years she has written a number of short stories and opinion pieces. The Dark Lake is her first novel. 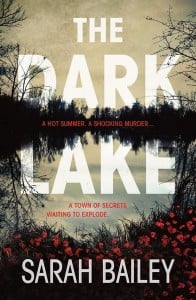 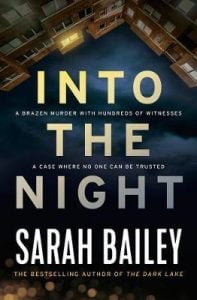