Literary Translation is a Multi-Faceted Task: Q&A with Stephanie Smee, Translator of The Godmother Better Reading recently reviewed the wonderful book, The Godmother by Hannelore Cayre, but brought to us in English by Australian translator, Stephanie Smee. Often we read a great book that has been translated from a foreign language and not realise the enormous amount of work that has gone into that translation. In fact, a translation can make or break a book in foreign territories. We had the opportunity to ask Stephanie a few questions about her background and the translation process of The Godmother.

Let’s start with what languages you speak and how you became multilingual?

I was very lucky to be born into a multilingual family which made the process of learning new languages a little easier. My mother is Swedish and speaks about 5 languages and my father, although he is Anglo-Australian, is also an extraordinary linguist, and also speaks 5 languages, although 2 of them are ‘dead’ – Ancient Greek and Latin – so I guess he’s not really ‘speaking’ them. They’re both teachers, so they always recognised the value of learning another language. I learned French and German at school, lived for a year in Germany after school and also picked up Italian at university and lived in Italy for 3 months during my studies. I have spent the longest time, though, studying French, writing a thesis in French on various aspects of French criminal law for my Honours degree and also being lucky enough to return to France fairly regularly. I then worked as a legal translator from French for a number of years after leaving my career as a solicitor. As well as my work translating literature from French, I particularly loved collaborating with my mother to translate Gösta Knutsson’s “Pelle No-Tail” children’s stories from Swedish.

You translated Hannelore Cayre’s award-winning book The Godmother. Can you tell us a bit about the book?

Hannelore Cayre’s work is an absolute firecracker – it’s short and sharp and shines a light on some aspects of French society which are not those you would necessarily perhaps associate with your usual images of Paris. Hannelore herself is a practising criminal lawyer, so she knows her stuff. The female protagonist, Patience Portefeux – isn’t it a fantastic name? – is a French-Arabic translator/interpreter in the French criminal legal system, which of course completely tickled my fancy when I first read it.

She’s overworked and underpaid and finds herself juggling the costs of living with the sky-high expense of her mother’s nursing home. With access to more information than even the police have of the ins and outs of drug deals going down on the streets, courtesy of her interpreting of wire taps, Patience finds herself suddenly contemplating the possibility of a way out of her financial complications by let’s just say, getting involved in a little piece of the action herself. Cayre has a wicked way with words and her characterisations are feisty and frankly often downright humorous. And she spares no one in her sharp dissection of some of the shadier goings-on beneath the surface of French society.

I have to say, the book also appealed because it is a crime work in which no female is assaulted or dismembered… which I found quite refreshing!

One of my favourite books is by a Japanese writer and I’ve read four different translations of it, and have one clear favourite. Translating a book is an enormous and complicated job. Tell us about the translation process and how you work.

Literary translation is a multi-faceted task but one analogy I just love is the notion that it really is an aural task, a process of listening to the text you’re translating, bearing your audience firmly in mind. One of my favourite translators, Edith Grossman, who translated many of Gabriel Garçia Marquez’s books – “One Hundred Years of Solitude” for example – has commented that you really have to be able to “hear” the language of the original, its tone, what the language indicates about the characters, the author… but then you have to be able to speak it in English… so you really have to know your own language incredibly well, too. Grossman says that instead of asking whether you have enough knowledge of the language you’re translating from, the real question is: Do I have enough English?

So, my process involves a really close reading of the work first. And then a deep dive into the text, trying to be alert to all its different subtleties. I tend to like to solve issues as I go, rather than do a very quick draft followed by a closer re-working. So when I finish the first draft, it’s usually in pretty good shape. I also always like to have somebody else read it – and proofread it… my father has been fantastically helpful over the years in that regard, and I have a dear friend who has also kindly been a second or third pair of eyes. It is a pain-staking process, but I guess every translator has to have a good percentage of pedantry in their blood! It’s also wonderful to have the benefit of an editor’s eagle eyes. The internet is incredibly helpful, of course, but also when I’ve been translating older texts, from the 19th century, I still use old dictionaries from that time as the meaning of words slips as the years go by.

Has Hannelore Cayre read your translation?

It’s a great question – I’m not sure but I hope if she’s able to read it in English that she enjoys it as much as I’ve enjoyed translating it. It has been great fun and a great privilege.

Do you have any desire to write a book?

The idea is enticing, and I can’t deny the fact that from time to time I’ve thought about it, but I think the greatest joy of my work as a translator is to be able to play and work with and enjoy the words of other great authors and bury myself in their ideas, their stories, their brilliance, hoping to do them justice. I consider it not only a great pleasure but also a great honour.

Stephanie is a translator into English of all things literary and French. Her other languages, include German, Italian and Swedish. Having worked as a lawyer in Sydney and London, Stephanie happily traded in a legal career for a return to her 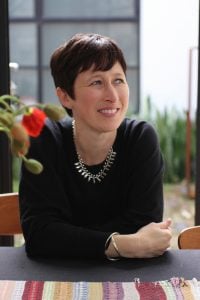 linguistic calling. After several years as a legal translator, she left the world of pleadings and contractual documents behind. Her most recent translation is of Françoise Frenkel’s, WWII memoir, No Place to Lay One’s Head (from the French, Rien où poser sa tête), an extraordinary story of one woman’s attempt to survive the horrors of Vichy France. It was published in English for the first time by the Vintage imprint of Penguin Random House (Australia) in 2017 and by Pushkin Press (UK) in 2018. Stephanie made her literary translation début with a new English translation of 19th century French children’s author, the Countess de Ségur’s Fleurville Trilogypublished by Simon & Schuster (Australia) in 2010. The Trilogy includes the perennially popular Sophie’s Misfortunes, Camille and Madeleine: A Tale of Two Perfect Little Girls and The Holidays. Stephanie’s subsequent translations of the Countess’ works – also published by Simon & Schuster (Australia) –  include the wonderfully cheeky Monsieur Cadichon: Memoirs of a Donkey (2011) and A Room at Guardian Angel Inn (2012) and its sequel, General Dourakine (2013).

Her translation of Jules Verne’s wonderful historical adventure novel, Michel Strogoff: Moscou-Irkoutsk was published by Eagle Books in April 2016. It is the first new translation of this exciting classic in over one hundred years. Stephanie worked with her Swedish mother on the first English translation of the original iconic Swedish children’s stories featuring Pelle Svanslös by Gösta Knutsson. They were published by Piccolo Nero, the children’s imprint of Black Inc. publishers in 2017. They are now an award-winning audio book published by Bolinda Audio, read by the wonderful Rupert Degas.

​Stephanie lives with her husband, Paul, and two children in Sydney.