Start Reading ‘Jewel In the North’ by Tricia Stringer

Rural Australia, 1895. The Flinders Ranges are a harsh and unforgiving place for the British pastoralists recently moved in. They’ve built up their properties from scratch, but three generations of working the land is not very long at all. It’s a beautiful but difficult landscape down in South Australia, and the Baker family have been living at Wildu Creek for many years – and even then they’re only starting to realise just how wild Australia can be.

The third in the bestselling Flinders Ranges series, Tricia Stringer brings us the deeply satisfying continuation of the Baker family’s story in the new book, Jewel in the North. For three generations, Joseph Baker’s family have farmed the land by Wildu Creek, forging relationships with the other local pastoralists, and the Indigenous tribes that move through his land. However, Joseph has married Millie, an Indigenous woman who bears him two children.

While his family is happy and healthy together, the local community do not approve of his choice of wife, nor his allowing the Indigenous people access to their traditional land. As the other local families – particularly Henry Wiltshire and Ellis Prosser – begin to make their hostilities known, and worse, begin to act on them, Joseph Baker finds himself fighting for his friends, his family, his existence, and above all, what is wrong and what is right.

Jewel in the North not only follows Joseph, but also his son, William Baker. William has finally come of age, and this means that he must become a man by taking over his own property. This poses all sorts of challenges as William learns how to run his own farm, but they’re made all the more difficult by the looming drought that threatens everyone in the Flinders Ranges. Add to that the threat of rejection from the woman he loves, daughter of the hateful Ellis Prosser, and the enmity of son of Henry Wiltshire, Charles, and William has destruction threatening him on all sides.

And then, if that wasn’t enough, there’s the oncoming diamond rush that could destroy the landscape everyone relies on – the pastoralists and the Indigenous people that rely on the land. The Indigenous tribes of the area are already being pushed out by the pastoralists; will they survive if diamond mining tears up the ranges? And will the pastoralists side with them, or look solely for profit through diamonds?

Tricia Stringer weaves a startlingly realistic portrayal of the hardships of South Australia in this period. Drought, floods, tensions over land – all contribute to create a tense environment. Throughout it, we are always rooting for the Baker family, who seem to consistently look back to their moral compass. As such, everyone else seems to be driven by greed. Stringer has created gripping, realistic characters, that are both flawed and merited. Additionally, she has a sharp awareness of the realities of the Indigenous people during this time; refreshing, as their essential narrative is often left out of literature set in this period.

Jewel in the North is a breathtaking historical family saga of epic proportions, spanning from 1895 to 1914. It examines the tensions of community and the intricacies of family, the relationship between coloniser and Indigenous people, and the threat of the First World War looming above everyone. Above all, it’s a story of love, death, and forgiveness. If you’ve read the first two books (Heart of the Country and Dust on the Horizon), we can tell you this will be a stunning addition to the series. For everyone else, pick up a copy. The Baker family saga will grip you and leave you breathless, and desperate for more.

Tricia Stringer is now the bestselling author of the rural romances Queen of the Road, Right as Rain, Riverboat Point and Between the Vines and the historical saga Heart of the Country and Dust on the Horizon. Queen of the Road won the Romance Writers of Australia Romantic Book of the Year award in 2013. Riverboat Point was shortlisted for the same award in 2015 and Between the Vines in 2016. She’s delighted her portrayal of rural Australia is enjoyed by many. It’s her goal to bring the country to readers. She also finds great enjoyment in bringing history to life in her short stories for children and her sagas for adults. There’s always another tale to be written. Thus said, she is currently working on her next manuscript. The Last Cruise: Read an extract from Table For Eight by Tricia Stringer Never Too Late: Q&A with Tricia Stringer on writing Table For Eight The Love Boat: Review of Table For Eight by Tricia Stringer 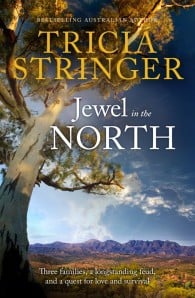 Jewel in the North: A longstanding feud of land and love, a family torn apart and a quest for the ultimate prize...A breathtaking historical family saga of love, death and forgiveness and a quest for the Jewel in the North1895 The Flinders Ranges are a beautiful but harsh landscape as Joseph Baker, a pastoralist in that unforgiving environment, knows all too well. For three generations his family have farmed the land, married and had children at their property at Wildu Creek, but now, struggling with hostility from the local community for his choice of wife, Joseph finds himself fighting to save not just his friends and family but his very existence.His son William has his own battles to fight: not only the drought that takes over the land but his own despair, as he faces rejection from the woman he loves. Meanwhile, a ruthless enemy will stop at nothing to take from William what he considers to be his. Could the vicious and cunning Charles Wiltshire be his nemesis? Or does another man, in a quest for the Jewel of the North, hold the key to his destruction?As the First World War looms on the horizon, two men struggle to survive both the elements and each other on a quest to find that they hold dear but only one will have the courage to stand strong.

The deeply satisfying conclusion to the bestselling Flinders Ranges series.About the AuthorTricia Stringer lives in the Copper Coast region of South Australia with her husband and their assorted animals. This home base has proved a wonderful place to raise their three, now adult, children and has been a starting point for many a family holiday, camping in favourite Flinders Ranges spots or travelling to other states of Australia. She enjoys a variety of crafts and sipping the odd glass of wine when she’s not tangling with computers, reading a good book or walking on the beach hatching her next story.